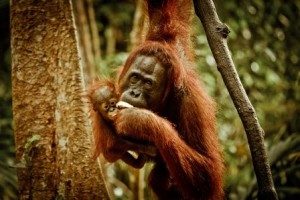 Orangutans are Asia’s greatest apes. Originated from Africa, these creatures were once present all over many places in Asia. They included China, Indochina and Java. Unfortunately, the orangutans in those regions have gone extinct.

There are currently on two regions left for orangutans to flourish. You can find out where these places are in this 35 Facts About Orangutans in Indonesia.

Read below all the fascinating facts about these orangutans. These facts might help you understand better about their species. As well as read more about Indonesia Orangutan

Orangutans have a highly similar DNA with humans. In fact, it is often said that Orangutans are the type of mammals that are related to humans. The DNA similarity between humans and orangutans reaches around 97%. The name Orangutan itself means ‘human of the forest’. The words and meanings are derived from a combination of Bahasa Indonesia and Malay.

The height and weight between the male and the female species of Orangutans are different. The males are generally taller and weigh more than the females. The average height of a female Orangutan is around 1.5 metres while its weight is 37kg. As for the male Orangutan, he is as tall as 1.4 metres and weigh up to 75kg. You may want to read about Indonesia Wildlife

3. Orangutans are Not Pets

Nobody in Indonesia can solely and personally own an orangutan as a pet. It is absolutely not allowed. This ensure that orangutan can still live in the wild. It also reduces the chance of abusing and mistreating the orangutan at their own private property. However, some organisations are allowed to have a permit to use orangutan for research and educational purposes.

4. Have Fingers and Toes

The hand structure of an Orangutan is similar to that of a human. They also have 4 fingers and a thumb. As for their feet, they have 5 really big toes. The Orangutan can actually use their toes to grab or have a grip on something. They have more flexibility with their body parts than humans.

It’s been long believed that there were only two species of Orangutans in the world. The first species is called the Bornean Orangutan and the second species is the Sumatran Orangutan. However, as of November in 2017, a third species have been discovered. They named the species Tapanuli Orangutan. Read more about Endangered Orangutans in Indonesia

Orangutans are actually omnivores. But their diet mostly consist of fruits. They prefer fruits with a lot of flesh and juice. Moreover, they discard the skin and only eat the inside of the fruits. Orangutans also eat leaves, barks, nuts and insects. Sometimes, they would eat eggs from birds. You may want to read about Animals of Borneo

Orangutans are intelligent creatures. They are able to utilise the things around them to reach a certain goal. For instance, if an orangutan sees a honey that it wants to eat then it will find a way to get the honey. The orangutan would most likely use a stick to get the honey down to the ground. Another example would be when it rains, the orangutans would use big leaves in the forest to protect themselves.

Other time, orangutans would also eat rocks or soil. According to research, the reason for this behaviour is so that they can get more minerals. In case that they are in a place where there is a lack of fruits or other kinds of food, the best thing to fulfil their nutrients are rocks or soils. Besides that, they eat the rocks when they experience a bad case of diarrhoea.

Orangutans have their thirst quenched from all the juicy fruits that they eat. The leaves that they consume also contain water from the rain in the forest. Orangutans are also able to find additional water sources from holes in the tree or their trunks. In case there is no water then they would chew on leaves and place them on trees so they can absorb water.

As of now, Orangutans only have two habitats on where they can flourish. These habitats lie in the rainforests in Borneo and the northern regions in Sumatra. Thousands of years ago, Orangutans had a bigger habitat. They also lived in Java and southern parts of China. Unfortunately, they all have gone extinct in those places.

Orangutans are currently under the endangered status. In Borneo, there are only one hundred thousand of them left in the forest. On the other hand, there are only around seven thousand in Sumatra. For the past years, the species are experiencing a steep decline in their population due to deforestation. You may also want to read endangered animals in Indonesia.

13. Help in Restoring the Forests

Orangutans are crucial mammals in the growth of the tropical rainforests. In fact, they are so crucial that without them, rain forests may eventually die out. The way orangutans keep restoring the rainforest back to its natural state is through their eating habit. From the seeds that they do not consume or through their waste, they are planted back into the soil. This is an important part of dispersing the trees in the forests. Read more about Native Animals in Indonesia

Orangutans can actually transmit different kinds of disease to humans and other wild animals. Some of the diseases that they can carry are tetanus, respiratory illness, tuberculosis and hepatitis. These are serious diseases that must be taken care of immediately once they appear in an orangutan. Moreover, orangutans can also receive diseases from humans too as they are also sensitive. Improper caring can cause a population reduction.

Orangutans are not exactly the most mammals out there. They move and go on about their days slowly. A huge amount of their time are spent on observing and foraging for food in the rain forests. The rest of that time are used for them to sleep or simply rest in order to gain their strength back.

Here are more facts about the orangutans that you should know.

Orangutans are not less important than other animals in the world. In fact, the world depends on these intelligent mammals to function properly.

17 Fun Activities to Do in Bali Indonesia