Education is the process of learning and developing of one’s knowledge, skill, mind, character by formal schooling, teaching or training. Parents and family are the first place for children to start archiving their knowledge. At the age of 5-6, parents start introducing their children to formal education such as kindergarten. Formal education commonly divided into such stages. Such as:

Education frequently takes place under the guidance of educators, but learners may also educate themselves through homeschooling service.

Education system has been around since the era of Hindu-Buddhist development.  Then, the education was called karsyan. It has a meaning as a place of hermitage. When Islam entered and spread all over Indonesia, there were pondok pesantren. Pondok Pesantren is a type of Islamic boarding school.  Then,it was introduced and several of them were established. The location of pesantren is mostly faraway from the hustling crowd of the city, resembling the location of Karsyan.

Formal education in Indonesia starts around the time of Dutch’s colonization over the country. Brugmans states that education is determined by political and economic considerations of Dutch in Indonesia (Nasution, 1987: 3). Not everyone has the same right when it comes to education back then—only special people with special status allowed to taste the experience of formal education. Even though Indonesian people with special status allowed to learn, education for Dutch people has always been the main priority. In fact, the only reason Indonesian people can taste the experience of formal education is just so the Dutch can have as much cheap labor as they can.

Financial difficulties that happened to the Netherlands due to Diponegoro War in 1825 to 1830 as well as the Dutch and Belgian war in 1830 to 1839. It motivated the Dutch to forced labor Indonesian people in order to cover up their war expenditures. To ease the communication between the natives and the Netherlands, able to speak Dutch become Klein Ambtenaarsexamen low government employee exam’s requirement in 1864. The characteristics of education the Netherlands gave for Indonesian people are gradualism, dualism and a very strong control.

Only when it comes to Ethical Political era that the government actually put enough attention to Indonesian people’s education. However, it didnt offer benefit Indonesia. Indonesia education evolves until 1930 before the crisis hampered the world.

Likewise, when Indonesia won independence, the education of Indonesia’s people still not improved.

Immediately after the proclamation of independence, the new formed Indonesian Government appointed Ki Hajar Dewantara as the first Minister of Education. From 1945 to 1946, there has been a lot of turnover Minister of Education and with the brief length of service for each, there is not much they can do.

In the period of 1945-1969, the national education of Indonesia’s aim went through five changes. The national education of Indonesia’s aim in the early days of independence is focused to patriotism. As time goes by, lot of changes made based on the environment of Indonesia’s national life and no longer just patriotism. In UU No. 4/1950 on the Basics of Education and Teaching in Schools, Chapter II, Article 3 stated, “The purpose of education and teaching is to form human decency cover and citizens of a democratic and responsible for the welfare of the people and the homeland.”

See also: History of Jakarta – Most Expensive Universities in Indonesia

There are several types of education which applied in Indonesia. Such as:

Public school is known as an independent schools, non-governmental, or non-state schools. Public school is not administered by local, state or national governments. Thus, they can select their own students with their own terms and conditions. Every private school are funded in whole or in part. It done by charging their students tuition along with donation from foundations. Then, it much better rather than relying on mandatory taxation through public government funding.  Each private school applies policies from the Indonesian Government, and given the opportunity of additional activities whether cultural or for sport.

Vocational School locally known as Sekolah Menengah Kejuruan (SMK) is an education stage equal to Senior High School (most known as Sekolah Menengah Atas or SMA). When one is graduated from Elementary School, he or she can either enter SMK or SMA. Usually, those who wishes to continue to university will choose SMA, meanwhile, those who wises to immediately working will choose SMK.

SMK is more focused on developing one’s expertise in things such as:

There are two major religious school in Indonesia, that is Christian school and Islamic School. Even though both school is exclusively for each religion only, as time goes by, a Christian can attend an Islamic school just fine and so the otherwise. These kind of school, usually have addition lessons that revolves around the religion itself.

In Indonesia, there are two types of Muslim schools, that is boarding schools known as “pesantren” and Islamic day schools known as madrassahs (or madrasas). Pesantren began as an informal religious school meanwhile madrassahs by offering a more formalized religious education but as time goes by sometimes, the situation can be reversed.

Academic education is a higher education. It is directed mainly at the acquisition and development disciplines of science, technology, or certain arts. Then it also includes educational programs of undergraduate, masters, and doctoral degrees.

The school year in Indonesia is divided into two semesters. The first commences in July and ends in December while the latter commences in January and ends in June. Grades of Indonesia’s education according to level is Preschool, Primary School, Middle School, High School, and Post-Secondary Education.

Preschool is an educational establishment or learning for children between the ages of three and five, prior to the commencement of compulsory education at primary school. Few preschool have their own uniform color, not necessarily decided by the government. In Indonesia, Preschool known locally as TK (Taman Kanak-kanak) and divide into:

Primary or Elementary school is the first stage of compulsory education in most parts of the world, and is available without charge, unless if it’s independent school. In Indonesia, Primary School known locally as Sekolah Dasar (SD) and divide into:

High School is an educational stage attended after primary school or middle school and before university. Commonly, the uniform of High School is white top with gray bottom. In Indonesia, Primary School known locally as Sekolah Menengah Atas (SMA). SMA divide into:

Post-secondary education, or third level education is an optional final stage of formal learning. It occurs after completion of secondary education. This is the university stage. A person can continue his or her study to this stage or not at all. Usually, the one graduate from SMK will immediately work in a company, meanwhile the one graduate from SMA will continue to this stage in order to obtain positions with higher salaries—though, it can be the otherwise.

There is no limitation of age at this stage and the normal time spent to finish the study is four years. Post-Secondary Education generally culminates in the receipt of certificates, diplomas, or academic degrees. The degrees available in Indonesia are:

Indonesian people are required to attend twelve years of school which consists of six years at elementary level and three in secondary level. Some schools also offer an accelerated learning program in which students who perform well can complete the level in two years. It is not necessarily to go to preschool or higher education such as college—it is purely one’s decision and didn’t affect the education system itself.

Most of students in Indonesia go to school six (or five, depending on the institution) days a week from 6:30 a.m. until afternoon (usually 2 or 3 p.m.) and followed by extracurricular activities. At university, there is a class exclusively for those who work, usually start around 5 to 10 PM in 4-5 days a week, namely evening class or employee class. Though, in some university employee class start in the morning to evening and only on Saturday and Sunday.

Education level is the level or stage of development of the learners, the objectives to be achieved, and development capacities. In Indonesia, level of education divided into early childhood education programs, primary education, middle education and higher education.

In Indonesia, early childhood education programs, locally known as Pendidikan anak usia dini (PAUD) is an optional stage of education. In the past, most parents didn’t even think to enroll their children in PAUD and directly sent them to Elementary School. Many parents prefer to teach their children basic skill (reading, counting and writing) on their own before sending them to Elementary School.

PAUD is held to assist the growth and development of children physically and mentally in order to have them ready for further education.

According to Article 28 of the UU Education No.20 / 2003, paragraph 1, the range of  early childhood education is 0-6 years. Meanwhile, according to Clumps Scientific Study of Early Childhood, early childhood implemented since the age of 0-8 years.

Here is the range of early childhood education in Indonesia: 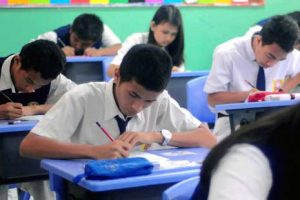 Then, at the end of primary education, students are required to pass the National Examination (UN) as it is a requirement to be able to continue their education to the next level (SMP / MTs).

Both of nationally and equal quality education levels among regions conducted by the education assessment center based on the Law of the Republic of Indonesia number 20 of 2003.

The general higher education and training that takes place in a university . Then, it usually includes significant theoretical and abstract elements, as well as applied aspects.

The types of higher education are:

The Development of Indonesian Education in New Era

In this new era, developing skill and knowledge are not limited only to formal school or homeschooling. Now, internet play an important part in the educational system of Indonesia. Everyone can easily learn about anything from internet at anytime. But even though education can easily obtained now, education in Indonesia’s development still lacking a lot of things. Lacking of basic learning skills on curriculum and moral education. The quality of education in Indonesia still counts as poor. By looking at how easily a student has a good score even though they didn’t understand the lesson, it’s very saddening.

All this time, study or not, every student’s achievement is considered equal and everyone passed exams at the same time. This generalizes treatment towards every student in Indonesia is considered unfair since everyone have a different potential and environment. In order to stabilize education system in Indonesia, the government need to consider the students’ ability before deciding to use curriculum that too far ahead for them.

Although there are still many deficiency on Indonesia’s education system, education in Indonesia today is at least progressing quite well. Indonesia now ranks 69th out of 127 based on the Education For All (EFA) of UNESCO which is based Education Development Index (EDI).