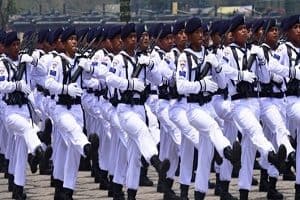 First, TNI Navy was formed on September 10, 1945 which at the time of its establishment was formerly named Badan Keamanan Rakyat (BKR Laut/Sea) which is part of the People’s Security Agency.

There are two fleets of Indonesian Navy. First, West Fleet is in Tanjung Priok, Jakarta there’s also the second is the East Fleet is on Tanjung Perak, Surabaya. Beside those fleets, there’s one Military Cross Traffic Command (Kolinlamil). The Navy also supervises the Marine Corps. (See also: Flag of Indonesia) 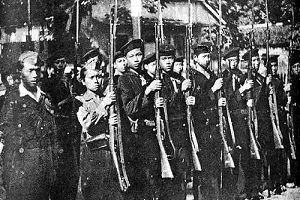 The history of the Navy begins on 10 September 1945. First off all, after the initial proclamation of independence of Indonesia state, the initial government administration of Indonesia established the Marine Security Agency (BKR). (See also: Indonesian Lifestyle)

Meanwhile, Indonesian Veteran Sailors were command the BKR. Those veteran sailors had served in Koninklijke Marine (Royal Dutch Navy) during the Dutch colonial period. They also served Kaigun during the Japanese occupation.

The establishment of an Indonesian military organization known as the People’s Security Army (Tentara Keamanan Rakyat) also helping to increase the popularity of TKR Laut. The TKR further known as the Navy of the Republic of Indonesia (ALRI), with all its strengths and capabilities. Many Naval Bases were established, the shipping vessels of the Japanese Shipping Bureau were empowered, and their comrade personnel were recruited to meet the demands of the duty as the newly formed Republic’s naval guard. (See Also: Indonesia Language)

During 1949-1959 the ALRI succeeded in perfecting its strength and improving its ability. In the field of Organizations ALRI was forming 3 fleets. First Fleet, is the Marine Corps which was then change to Naval Command Corps (KKO-AL/Korps Komando Angkatan Laut). The second is Naval Aviation. The last is a number of Maritime Area Command as the sea territorial command of defense aspect.

In the 90’s, the Navy also received additional strength in the form of warships from Corvette type, Parchim Class. There are also landing craft tanks (LST) class ‘Frosch’, and Kondor Class Mine Sweepers. The addition of this power is still  actually far from the needs and demands of the task. Especially during this multidimensional crisis that demands an increase in operation but the acquisition of support is very limited.

However, until now, The Indonesian Navy is still building more and more powers to becoming the best navy in the SEA, or also even the world. (See also: Surabaya War)

Beside the informations provided above, these are also an interesting thing you might want to know about them, their Strength. Check these out :

The name of the ship owned by TNI always starts with KRI, abbreviation of Warship of the Indonesian Republic. In addition there is also a ship that begins with KAL, stands for Naval Ship.

The Indonesian Navy also use the numbering system with the purpose to distinguish each ship. The name of the ship varies, ranging from the names of  Heroes, Bays, and also the animals.

Currently the Navy has approximately 68,800 troops, there are also 18,500 marine personnel and 1,090 aviation air personnel. The Indonesian Navy Strength in outlined as follows:

KRI has 167 ships, and divided into three groups :

1. Striking Force consists of 51 KRI that has strategic weaponry:

3. Supporting Force, consists of 63 ships. Those are :

Beside of those ships, Indonesian navy also has more forces like Supporting Patrol ships. Which is for supporting navy Bases. Also carrying out patrol duties and other supporting tasks. There’s also some aircrafts. The Navy also has Aircrafts or course, which contain of 82 units. Lastly, they also have landing troops. The troops contain about 437 combat vehicles. That’s a lot. Also, All of them are important.

The Navy has plans, actually for the many years to come. Based on the 2005-2024 Power Development Plan, the operational structure of the Navy will be changed where two existing fleet commands (Western Fleet Command and also Eastern Fleet Command) will be merged into a fleet led by a three-star admiral which based in Surabaya.

Finally, that’s it, Facts of about Indonesian Navy Strength. They are so powerful and yet always their duty as an army. Protecting peoples, and also bringing peace to the country. With all their strength, they will repell almost everything that threatening Indonesia. Seems like Indonesia is still secure, for years to come. As a result of their very honored job, to protect Indonesia. Have a great day everyone !