Home » Place » 15 The Biggest Stadiums in Indonesia (4# is Spectacular)

15 The Biggest Stadiums in Indonesia (4# is Spectacular)

Stadium is a building generally uses to hold sport events and concerts. There are field or arena surrounded by standing and sitting places for spectators. Modern stadium often has no roofs on the tribunes. However, there is also the stadiums which still use roof above their tribunes. Its similar as stadium dome.

On the other hand, there are several stadiums in Indonesia which reaches International level. 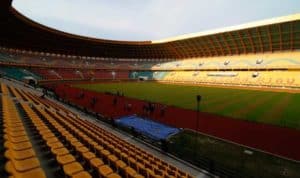 Riau Main Stadium established in 2009. it built in order to welcoming the National Sports Week (PON) 2012 in Pekanbaru. It can accommodates up to 44 thousand spectators. It also used for grand event of the Asian Cup for ages 22. Therefore, Riau Stadium is one of the largest stadium in Southeast Asia .

The stadium has become the pride of Riau. Moreover, there are unique shape with oval roof that covered all the stands. It exactly similar as stadiums grade A in most of European countries.

Its complete with standardized of lights, lawns, and also scoreboard, making  this stadium deserves to be one of the best stadiums in Sumatra Island. However, the cost of making this stadium was huge. Riau provincial government must spend at least 858 billion in order to make spectacular stadium. The turfs imported directly from Brazil. So the texture of grass is smooth with bluishing green color. 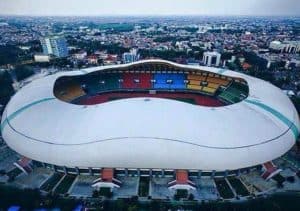 Patriot Stadium established in 1980 in Bekasi city, west Java. The first event was hold is the Regional Sports Week. Then, Patriot Stadium was renovated in 2012 and inaugurated back in 2014 into an international stadium.

Stadium with a capacity of 30 thousand spectators is pledge of Bekasi city. There are 9.1 hectares areas for this International stadium. It costs reach 450 billion rupiahs. the source of construction fund is from the budget of Bekasi city. Patriot Stadium also pride of Bekasi people because it usually used by national football athletes as alternative stadium for training.

Patriot Stadium contains a roofed made of metal types with frame space around 20,000 square meters on the outside walls as high as 18 meters. Moreover, there is also a VIP grandstand with a capacity up to 10,000 spectators. It completes with parking deck which can accommodate the thousands vehicles. 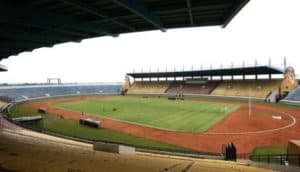 This International stadium established in January 2003.  The stadium inaugurated on the anniversary of Bandung regency to 364, on 26 April 2005 by the Chairman of the Central Sports Committee at the time, Agum Gumelar.

The construction of Stadium costs up to 67.5 billion rupiahs. It from the budget of the Government of Bandung regency. Moreover, it can accommodate 45,000 spectators. Therefore, Si Jalak Harupat becomes one of the largest stadium along with Gelora Bandung Lautan Api stadium in Bandung, west Java.

Si Jalak Harupat Stadium is venue for AFF Cup 2008. They supported facilities such as commercial facilities and landscaping area of 1.3 hectares. Therefore, they nearly get perfect ratings for International stadium ranks. 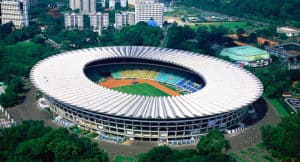 Gelora Bung Karno Stadium is a pride of Indonesian people. This stadium is multi-purpose stadium in Jakarta. It located in the sports complex of Bung Karno.

The stadium commonly uses as an arena football game in International level. The stadium is named in honor of Sukarno, Indonesia’s first president. He was a figure who sparked the idea of building this sports complex.

The construction was funded by soft loan from the Soviet Union up to 12.5 million US dollars which certainty is obtained on December 23, 1958. That’s why, with the substantial fund, it makes GBK  as the largest football stadium in Indonesia. Meanwhile, in event ahead of the 2007 Asian Cup, the stadium is undergoing renovations. It reaches the capacity of  88 thousand spectators. 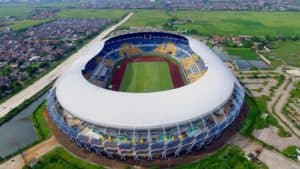 The pride of Bandung, west Java. the stadium has been repeatedly held a prestigious game.  Bandung Lautan Api Stadium was hosted the opening and closing PON West Java in September 2016.

On the other hand, The stadium equipped high quality facilities. There are athletics, circulation,  football pitches, offices, e-board, full roving grandstand roof, services,  scoring board and chair seats. Meanwhile, if there is no chairs, can accommodate 72,000 people. However, with the FIFA regulations, the number of spectator seats only accommodate 38,000 people 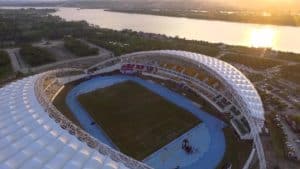 Aji Imbut Stadium is one of stadium with complete facilities. It located in Borneo, East Kalimantan province. venues even have become one of the grandest in Indonesia. The stadium was built for the PON XVII in 2008.

The stadium spent up to 899 Billion rupiahs for constructions.  Then on March 28, 2011 East Kalimantan Governor inaugurated the stadium’s name became Aji Imbut Stadium. The stadium has a capacity of about 35,000. The qualities of facilities are in A grade.

The name of Aji Imbut based on instrumental figure of development in Kalimantan. Aji imbut is the title of Sultan Aji Muhammad Muslihuddin. Moreover, there are several sport facilities such as football field covered velodrome building, arena equistrian (equestrian), archery stadium, martial arts building, BMX bikes arena, athlete dorms and include network infrastructure and enhanced by the arrangement of the garden and plaza. 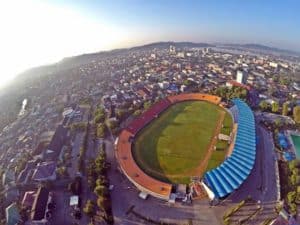 The stadium was projected for the opening and closing of PON XVII 2008 in east Kalimantan. Palaran is the first stadium with seat bleachers in entire stadium. Then, also the biggest stadium in Indonesia. Even in Southeast Asia with approximately 50,000 seats.

Palaran inaugurated by President Susilo Bambang Yudhoyono on June 18, 2008. The stadium is categorized as a stadium with A grade. Meanwhile, the funds of construction costs up to 1,2 trillion. Moreover, the costs was almost half of the regional budget (APBN) of east Kalimantan .

Then, construction of stadium taken 993 days. It from September 28, 2005 to June 20, 2008. On the other hand, Palaran also believed as the host of Djarum big league in 2008. The stadium complex has high value to hold international events. 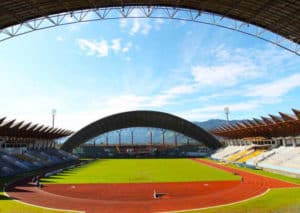 Meanwhile, the stadium renovated after the earthquake in 2004. In 2011, Harapan Bangsa used as the headquarters of the Aceh football club.

Moreover, Harapan Bangsa approximately has a number of capacity up to 45.000 spectators. Meanwhile, There are another functions of this Stadium. Most of them use this stadium for jogging, playing football, tennis, basketball, badminton, even archery.

You may search: Sumatran Tigers 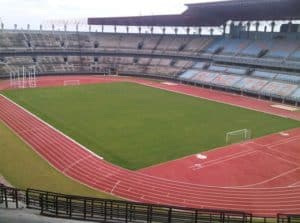 Gelora Bung Tomo located in Benowo, Surabaya, east Java. The stadium precisely is one of International stadium owned by Indonesia. Gelora Bung Tomo officially published on August 2006. On the other hand, stadium can loads up to 55,000 to 60,000 spectators.

As one of the largest stadiums in Indonesia, Gelora Bung Tomo equipped with tribunes around the field with great quality of lids and seats. Then, there is also an athletic tracks up to 400 meters long with 8 lines in areas. Tracks are usually use for training and exercising by national or region athletes.

On the other hand, the stadium has 21 entrances to facilitates the setting and checking of spectators. The lane of entrances designed for the spectators to be more orderly and freely pass through the main area.

Meanwhile, the standard class of seats built along with large stairs around 80 cm of widths. It makes audience feel more flexible. Then for standard class also provides a toilet and canteen in every corner of the tribunes. On the other hand, the VIP class located on four to seven floors. It completes with special toilet better than standard class.

Moreover, the VIP class positions will be enjoy the game, because the tribunes is the most strategic place to watch football match. Indeed, Gelora Bung Tomo is the great stadium which costs approximately up to 600 million rupiahs. 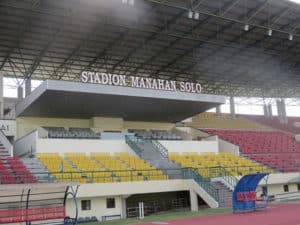 Manahan Stadium recognized as the largest stadium in Indonesia and has International standard. The huge building located in Adi Sucipto, Surakarta, central Java. Its approximately included as part of Manahan Stadium Sports complex. Meanwhile, the name of Manahan taken from the name of Banjarsari’s village.

Manahan offered by Mrs. Soeharto Foundation. The construction began in 1989 consists of 17,000 m2 land areas  and ​​33,300 m2 building areas. Then, finally in February 1998, Manahan Stadium officially opened by the President of the Republic of Indonesia, Soeharto. Stadium usually uses as alternative for holding region football matches especially in east Java.

On the other hand, Manahan has a high quality of facilities. It has open tribunes on the east, north, and south sides. Then, they covered with VIP tribunes on the west along with bleachers. Meanwhile, Manahan stadium has a number of capacity up to 35,000 spectators. 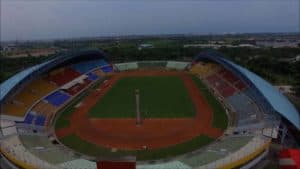 This stadium is one of the great stadiums in Indonesia. It located in Jakabaring Area. Sriwijaya Jakabaring was built for host the PON XVI in 2004. Then, the 3rd place 2007 Asian Cup stadiums represented in this stadium in addition to Gelora Bung Karno. As well as 2011 SEA Games.

Meanwhile, the name of Sriwijaya taken from a maritime empire with no political interfere in South Sumatra area. Sriwijaya Jakabaring reaches up to 40,000 spectators with a great facilities.

There are standard tribunes, water absorption, scoreboard and also lighting. Most of them recognized as A quality according to AFC. Then, four VIP convensional tribunes located in western and eastern of fields. Both are protected by a roof supported with arch steels.

The stadium is prepared for welcoming the implementation of the Asian Games 2018. It still continuing to build a new facilities to profit that big event. Then, construction of new facilities on area up to 30.8 hectares costs about 1.2 trillion. Moreover, Sriwijaya will develops more than 100 thousand seats in addition of facilities for 35 sports. 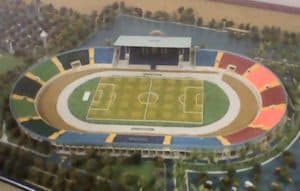 Then, Kanjuruhan can load up to 40,000 spectators and has a valuable facilities around fields. The stadium is a pride of Malang people. On the other hand, Kanjuruhan has so many facilities to support the arena. There are consists of standard tribunes with 2,736 m2 floor areas. 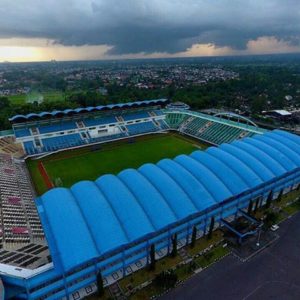 Maguwoharjo Stadium located in the north of Yogyakarta city. The stadium built in 2005 by Sleman city government. It has a different characteristics among other stadiums in Indonesia. The main difference can be find from the design of tribunes. Tribunes have a rectangular shape and refers to modern football stadiums in Europe. On the other hand, Maguwoharjo has no athletic tracks so spectators can more comfortable for watch the game.

Another dominant characteristic is four spiral blue roads in entrances of the stadium. So, we must walk spiral to enter the stadium. Moreover, it also powered by the great quality of turfs.

You may search: Luwak coffee 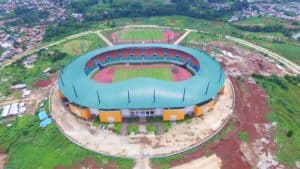 Pakansari stadium is one of magnificent stadium located in Bogor city, west Java. The stadium will be used for west Java Porda XIII in 2018. Then, the costs of construction reaches 525 billion rupiahs from west Java, Bogor regency, and country budgets.

On the other hand, the stadium facilities are according to FIFA standards. There are media center, VVIP room and athlete tracks. Meanwhile, Pakansari has approximately up to 40,000 spectators. The spectators can watch the match from all tribunes with closed roof.

Moreover, Pakansari stadium will be completed around 2016 to 2017. Therefore, it can be used for national sports week of west Java in 2018. 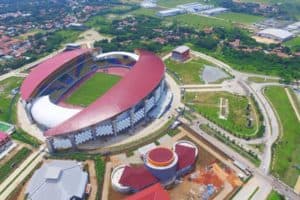 Football stadium located in east Cikarang, Bekasi city. The stadium built to host regency sport week in 2014. Then, the stadium has a capacity accommodates  approximately 40,000 spectators.

On the other hand, the facilities of Wibawa Mukti provides the large-size billboards, system information technology tools, and electronic tickets. So the spectators do not need to queue in stadium for buying ticket. They can buy ticket by online. It also provides multi-storey of building parking.

Therefore, the development of stadium costs around 560 billion rupiahs for put Wibawa Mukti as venue of 2018 Asian games which hold in Jakarta and Palembang.

In fact, Indonesia also has a spectacular stadium with International standard of quality for their facilities. Therefore, Indonesian stadium can be recognized as the fancy stadium that even the International football athletes can play comfortable for most high standardized stadiums owned by Indonesia.

10 Most Expensive Universities in Indonesia (1# is Surprising)

15 Most Beautiful Fabrics in Indonesia (#3 is Extraordinary)