Tobacco in Indonesia enjoyed positive views and increase economic contribution to the government coffers. It’s because many smokers say that smoking has become a necessity in everyday life, and that opinion is mostly true. In several surveys conducted in Indonesia, it appears that smoking is considered more important than food. Tobacco Control Support Center (TCSC) 2016 shows that the cigarette position in household daily expenditure is second highest after rice consumption. The cost spent on cigarette spending, especially by poor households, can be allocated to meat consumption 14 times. The amount is also equivalent to six times the purchase of milk and eggs, or pay seven months of child education expenses. But since tobacco is highly addictive then one just can’t forget about it easily.

History of Tobacco in Indonesia

According to Indonesian Wikipedia, it is explained that the history of Indonesian Cigarette originated from the city of Kudus. The first cigarette name is Kretek Cigarettes. Kretek cigarettes are of two types: non-filter clove cigarettes and those with filters. Clove cigarette manufacture only uses dried tobacco with clove sauce mixture and done manually by hand and when the cigarette is sucked then it sounded like “kretek”. Hence it was called kretek cigarettes.

The origin of Indonesian Clove Cigarettes stems from the discovery made by Haji Djamari around the end of the 19th century. At first Haji Djamari, had pain in his chest but then he smeared clove oil on his chest and the pain subsided. From there on came an idea from Haji Djamari to gather cloves leaves and mix them with tobacco to be rolled into cigarettes.

At that time rolling tobacco cigarettes has become a sort of tradition for men. But Djamari made modifications by mixing it with the corn husk. Djamari who continue to routinely smoke clove cigarettes then suddenly feel his chest pain was healed. From here on the information spread quickly that clove cigarettes Djamarli invented can cure disease. So this becomes a new business for Djamari and at the same time spread early information about kretek cigarettes in Indonesia and its rumors of profound health impact.

How to: From Planting to Harvesting

There are several phases that needed to be done to harvest tobacco so it can be ready to process into a cigarette.

Tobacco leaf picking is done in two ways: common pick (reaping) and cutting stalk. Reaping is done by picking the leaves only, while stalk cutting is done by cutting the tobacco rod along with the leaves just at the base of the stem. To obtain high yields tobacco then the farmers usually do reaping at most twice a day and then continue with stalk cutting.

The first picking of tobacco leaves is done when the plant is 65-70 days old, with the number of leaves picked totaling 2-3 sheets. Stalk cutting is done when the shoot appears to be old enough (yellow in color) with plant life 90-100 days old. Normally the picking is done in the morning to achieve better taste and aroma.

In drying the tobacco leaves for the purpose of decreasing its water content from 80 – 90%. During the drying process occurs aging process that changes the formation of leaves color. Drying is done inside a building, the drying is done for 22 days until it can be obtained a great dried tobacco. After that, the dried tobacco is tied up and wrapped with a mat ready for packing to a cigarette factory for further processing to turn into cigarettes.

Every smoker usually has different tastes to the choice of their favorite cigarette. It’ll depend on their preferred taste. Below will be listed the type of tobacco. 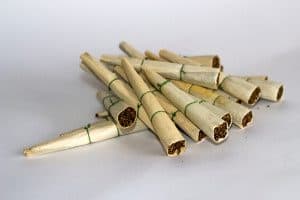 Klobot is a cigarette that uses wrapping material in the form of corn husk. The word klobot is absorbed from the Javanese language. Kelobot is bractea plant that covers the cob that is also used as a substitute for cigarette paper for rolling tobacco.

Klobot tends to be easy to use as a medium for wrapping cigarettes. Its texture is easily mashed and not easily torn, making klobot to become one of choice as tobacco wrapping. These cigarette wrapping are also widely used among fishermen and people in the mountains. The fishermen like this cigarette because klobot cigarette is not easily die despite exposure to sea water. 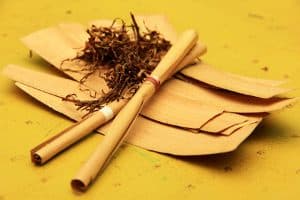 On the other hand, benefits of kawung leaf are to cure and reduce the risk of asthma. Meanwhile, kawung leaf rolls filled with native tobacco are commonly used by older people for the treatment of heart disease 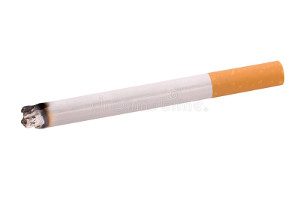 Cigarettes are cylinders of paper length between 80 to 130 mm (varies by country) with a diameter of about 11 mm containing tobacco leaves that have been chopped. Cigarettes are burned at one end and allowed to burn so that the smoke can be inhaled through the mouth at the other end. White cigarettes or often called mild cigarettes are one of the tobacco processed products.

In addition, Cigarette filter is also known as white cigarettes that is a type of cigarette without clove filling. Smoking this cigarette has a lower content of tar and nicotine compared with clove cigarettes and other cigarettes type in general. 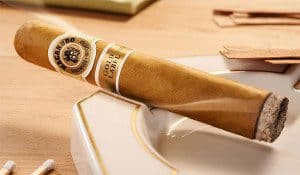 Cigars are a roll of dried tobacco leaves, which one uses to smoke. It looks like a cigarette, but its size is bigger and does not use paper at all. The cigar is a whole roll of tobacco leaves that are dried and fermented to form cigarettes. Smoker uses it by burning one end and the smoke is sucked by the mouth through the other end.

Smoking with cigars already existed from before the 19th century, and at that time people still rarely smoke cigars. Indeed, the current circulation of cigarettes has grown and has reached the world, but cigar lovers still exist and cigars are also still made in a traditional way.

In Sumatra, in the past, the young nipah leaves (called shoots) were made into cigarette leaves, a sheet of wrapping for rolling tobacco. After exfoliated thin leaves were dried dry, then it’s bleached to whiten it and then cut into cigarette sizes for consumption.

The tradition of smoking nipah leaves containing tobacco that has been burned is spreading in the wider community in villages. It is also used as a business field for some communities to sell ready-made nipah leaves complete with tobacco that one can smoke easily

There are many tobacco plantations in Indonesia, below are 5 of them that are well known for its tobacco production. 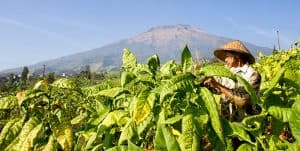 Tobacco is never separated from the small town in central Java that is Temanggung. Being on a plateau with a geographical position that stretches from the slopes of Mount Sumbing to Mount Sindoro, Temanggung makes a ‘paradise’ for tobacco production.

Tobacco Srintil is a main attraction of Temanggung. Some clove cigarette lovers said that without tobacco from Temanggung then the smoking experience will not be that great and satisfying. 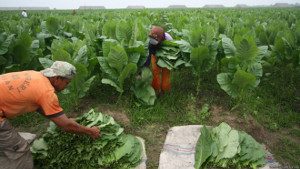 Since the colonial era, Deli has been known as one of the world’s best tobacco producers. The combination of seeds, climates and soil types in the Deli area produces tobacco with a savory aroma and tastes. Deli Tobacco is also suitable for cigar wrapping. The tobacco economy in Deli invites the presence of workers from many provinces who gradually create crowds in various corners of the city.

On the other hand, Tobacco is increasing in demand. Land that was originally forest is also used as a tobacco plantation. Climate, soil, and seed have different effects on tobacco quality. This tobacco became the reason Medan turn into a metropolitan city to date 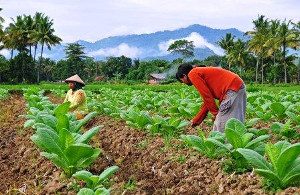 World Class Tobacco is located on the island of Lombok. In Lombok, especially in East Lombok, the plantation of tobacco are spread almost evenly. Lombok is a very fertile area for tobacco farming. In certain seasons, the rice fields there will appear green by the leaves of tobacco. This type of tobacco is called happy tobacco and it is one of the most popular types of Lombok tobacco and is sought after by lovers of clove cigarettes.

It’s fragrant aromatic tobacco and has a yellow ivory color when it’s dried are its unique characteristics. This tobacco exists and thrives in Suntalangu Village, East Lombok. This type  of tobacco has met the standards of quality recognized by the International Tobacco Agency based in Germany. 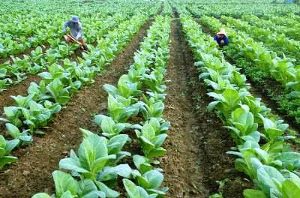 Jember is well known as one of the main tobacco producing areas in Indonesia. The most common type of tobacco grown in this region is Besuki na-oogst tobacco. Famous because of its distinctive aroma, this type of tobacco is well-known for its elastic property so it is very fitting to be a cigar wrapping.

That’s what makes this tobacco sought after in the international market. In terms of tradition and history, cigars themselves were introduced long ago in Indonesia and are part of the Dutch East Indies tradition and this makes them turn many forest in Jember into tobacco plantation to fulfill their demands of cigars 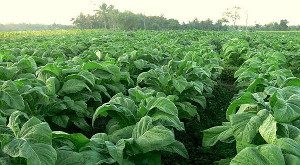 Pamekasan Regency is one of the largest tobacco producing areas in Madura, with a total area of 31,251 hectares (spread over 13 districts). Most madura tobacco is absorbed by cigarette manufacturers as the main raw material of cigarettes as well as a concoction of clove mixture. Madura is also famous for campalok tobacco.

Meanwhile, the existence of this tobacco is quite rare. Because Campalok tobacco planting land only consists of two plots, and only produce 7 kilograms of tobacco each season. The land is located in the area of Jembengan, Bakeong Village, Guluk-guluk District, Sumenep, Madura.

Development in the New Era

Although Indonesia produces much tobacco that the world needs but the government is also trying to reduce the consumption of cigarette mainly for younger people. The Indonesian government has been working on ways to reduce the number of new smokers by placing warnings about the dangers of smoking on packs or cigarette advertisements. In a joint study of research made by the government towards smoking warnings, it was found that  47.7 percent respondents stated health warnings on cigarette packs made smokers think of quitting.

However, as many as 89.71 percent of respondents actually think that the warning from the government is not effective to reduce the interest of smoking. Similarly, the ban on tobacco companies to advertise openly is not that effective, as many as 91.18 percent of respondents argue that the ban has no impact in reducing interest in buying cigarettes.

Although various warnings and restrictions are judged by many people to be ineffective, the truth is that 54.05 percent of respondents who have been cigarette addicts are aware of the dangers of cigarettes and say that they are trying to quit. As many as 16.22 percent say they do not intend to stop because they are just too highly addicted to cigarettes. A total of 13.51 percent unaware of a devastating effect of smoking on their health and only 2.7 percent said smoking was harmless.

Smoking is just an activity that produces no greater benefits to one’s health as it can only worsen it. The Indonesia government needs to find a balance in increasing the economy by producing more tobacco and also to reduce its usage among Indonesian people so that the health hazards won’t be that much greater experienced by ordinary civilians.