One thing to discover behind the natural attractions and unique habits of Indonesian people, is the art of Indonesia. There are so many kinds of art in Indonesia, divided into some forms like dances, traditional musics, paintings, and masks.

In this time, we’re gonna talk about some wonderful Indonesian masks that exist in Bali. You can so many different masks in Bali based on their own character. Strong, weak, and calm character can be found in each of the mask. Let’s take a look closer! 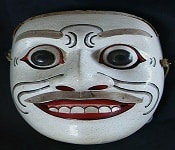 First thing first, we’re gonna talk about our first mask on the list of types of masks in Bali called Jauk Mask. This Jauk mask has the mean character behind it. With the big eyes and human face, it represents the combination between the human and giant.

So, if the Balinese people presenting the really mean character on the stage, usually they use this mask other than the others. But beside the mean character of a giant, there’ s a soft and kind human behind it. So it’s not fully a mean character, it’s more like the feeling of a human when angry or really upset of something. But, really heplful when needed. 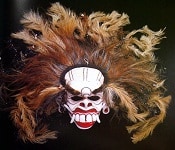 The looks of this Calonarang Mask already so scary. There’s simmilarity between this mask and our first mask above, the mean character it has. But this one is different. This Calonarang mask represents the evil fully.

There’s not a single good thing behind the character of this mask, there are some bad habits like jealousy and hatred filling this mask. With the big round eyes, pretty long fangs, and also a red face, this mask can be called the mask of the devil. 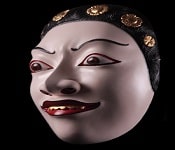 Whilst the other two masks created such an evil character, this Telek mask is like the protagonist of the story, the one who having the kind and calm character. The human face and white skin represent the kindness it has for the others.

This mask is actually a friend of another mask called Barong, which also having a really nice character even though looks hideous. It usually used as a mask for many Balinese dances, and also sold as a souvenir for the tourists. 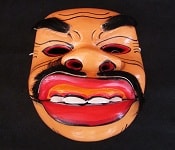 This masks represent the people itself that filled with fun things all day long. The Balinese people mainly use this mask to do some dancing for entertainment, not for the sacred thing like traditional ceremonies.

Usually the story it told are quite funny for the tourists, all of the jokes can be taken easily by all people inside the theater. Lots of humor, and lots of the laughable things done by the performances are the great things to see in Bali. 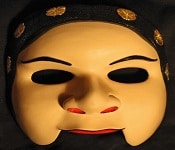 Next one is Pajegan Mask. This special mask is mainly used to accompany certain traditional rituals or ceremonies in Bali. Rituals that ended with the dance of Sidakarya Mask. Because of that, the wearer of this mask is not common people. Only a person with the high spirituality can wear this mask during the rituals.

A dancer of Pajegan Mask beside having the high spirituality, mush have the skills of puppet master, that has the ability to tell the story to the audience. And the ritual will be closed with the dance of Sidakarya maks. So, this mask and Sidakarya masks cannot be divided. 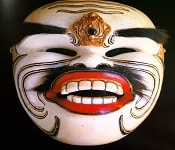 This is another sacred or holy mask of Bali. The Sidakarya mask is one of the important things of Balinese people life, especially in the way of spirituality. The uses of Sidakarya Mask is like a symbol that a ritual or ceremony has been done so well.

The Sidakarya Mask also tells us about the great history of the Brahmana. Many say that the mask itself is the bridge to connects people with Sang Hyang Widhi (God) and ancestors. Because of that, this mask is also a well respected one in Bali. 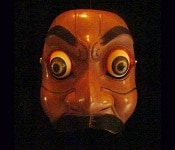 Here we have the Panca Mask. This mask is more like the improved version of Pajegan Mask. IF you want to see the performance of this mask, you can go to some temples in Bali to see one. There are five people doing the Panca Mask dance.

And after goign through some years, the Panca Mask developed into another beautiful mask called Sapta Mask. The difference between the Sapta Mask dance with this Panca Mask dance is the addition of the Putri and Condong dancers. 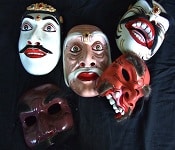 This Prembon Mask is also the unique one on our list. Not having its own special dance, the Prembon mask dance is the combination of many dance arts in Bali, for example there’s Panca mask, Arja Mask, and also Bondres Mask. The performance was made so easy to understand and hilarious.

The word Prembon dance itself means a combined dance arts that came from many others dances in Bali. Basically, when the dances combined into one single dance, it’s called Prembon mask dance. So you can enjoy different dance of the masks in one package. 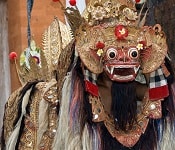 In the place of 9th until the last point, we wan to tell you about the kinds of Barong mask, the very special type of mask in Bali. There are so many of them actually, but we’re gonna point out five of them. So let’s start with the Barong Ket Mask.

This Barong Ket is actually the famous famous Barong in abli, because Balinese people always showing the dance of Barong Ket mask in almost all the areas in Bali. The form of it, is the combination between lion, tiger, cow, and a dragon. 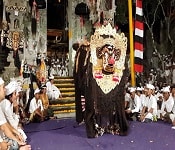 Having different form from teh Barong Ket above, this Barong Bangkal is actually a mask that resembling the face of a boar, an adult one. Barong Bangkal mask is usually performed door to door when there’s day of Galungan.

This mask is also became a very good entertainment for the kids. Maybe you think in your ehad now that the kids will be sacred by how awful it looks. But the fact tells us the opposite, many children in Bali love this, even some of them start to chase the perfomers to “scare” them. 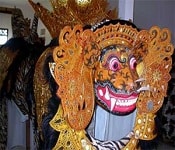 You can see almost the same shape as the Barong Ket has, but, the Barong Macan Mask is not a dragon or a cow, or the combination of both. It’s a tiger (Macan in Bahasa Indonesia). Even thought the body looks exactly the same, but the face of it is of course really different.

Just like the Barong Bangkal mask, this mask is not performed in one place, or in stage, but it’ll go to the houses or the streets, circling the village. Usually it’ll be completed with some Balinese operas with the music of Balinese gamelan called Batel. 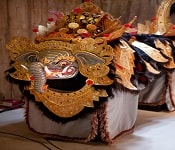 Having a body like the Barong Macan and Barong Ket, this Barong Gajah has a face of an elephant in the front side. You can’t see this Barong Gajah mask dance much often than those dances, because the mask itself is considered as a sacred mask.

The performance only held in certain areas like Bangli, Tabanan, Gianyar, and Badung. IF you’re going to those place, make sure you can look at the performance of this rare Barong Gajah mask before continuing your journey someplace else. 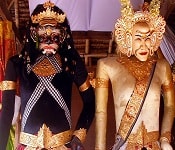 The last mask on the list of kinds of Balinese mask is the Barong Landong. This Barong has the humanoid form, and usually there are two of them, the black and the white. The black one called Jero Gede with its scary looking face, and the other called Jero Luh, the more calm one.

There’s a story that told the Balinese people about this Barong Landung. This Barong Landung is used to scare away the devils that always spread the people of Bali with disasters. And that’s worked. Now, the procession itself still being held, and the people still enthusiastic about it.

So those are the 13 unique traditional types of mask in Bali. As you can see, the Barong itself has so many different unique forms, beside that, there’s so many things to discover. Well if you taking a trip to Bali for cultural journey, then it’s a perfect time to do it. Have fun !