Indonesia is a plural country which has not only one but many religions, however the Indonesian citizens are uphold tolerance value to respect Religious Diversity in Indonesia. For Christians, Christmas is a very special moment and the Christians have been waiting for the D-Day as the birthday of Jesus Christ the Savior.

As a country with 16.5 million Christians and 6.9 million followers of Roman Catholics, each region in Indonesia celebrating birthday differently. In region which has high amount of  Christian / Catholic populations, the Christmas Day is celebrated with special rituals in accordance with the local region characteristics. In several big cities of Indonesia, the shopping areas often decorated with plastic Christmas trees and Santa Claus decoration. Below are some information about how each region in Indonesia celebrating Christmas Day: 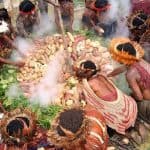 In order to hold barapen ceremony, the men will make a hole to put the burning hot stone and the women prepare leaves and other ingredients. Bakar batu or barapen is one of the gratitude, togetherness, and sharing  that is marked by eating pork together with the society. 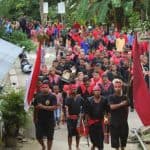 The Ambon people especially those who live in Naku country, holds a traditional ceremony called adat cuci negeri or washing the country.  It symbolizes the cleansing and sanctification (liberation of sins) of citizens and the local environment. The country washing ceremony begins by gathering at the house of the clan community (Soa) to hold the customary rituals.

The people then gather in traditional house (Baileo) while singing the local songs, dancing with the accompaniment of tifa (traditional musical instruments), and the women bring offerings such as betel nut, and a traditional drink called sopi. 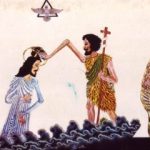 The celebration of Mass or worship in the Church is performed in Javanese language by the pastor, sometimes the pastor even wear a traditional clothes complete with beskap and blangkon.

Just like the celebration of Eid, Christmas is filled with the event of visiting each other’s family and relatives. Some children will get envelopes which contains money from the elders. 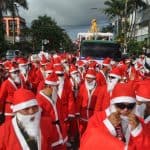 The pre-natal celebrations in Manado are held since December 1, where local government officials will be conducting Christmas Safari. The local government are participating in different worship every day in each district. Some of Manado people are accustomed to do mobile parades as well as visiting and cleaning graveyard.

The series of Christmas celebrations will end in the first week in January with a celebration called the kunci taon or New Year Key. The kunci taon is held by having some parades with unique costumes. 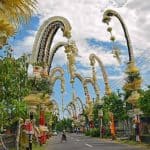 Not only celebration for Origin of Hinduism in Bali Indonesia, The village which mostly inhabited by Christian located in  the southern part of Bali. The people there wear traditional clothes and decorate the streets with penjor (bamboo decoration like janur) which symbolizes the dragon Anantaboga.

Christmas celebrations in the Bali area are not much decorated with Western culture, but more influenced by Hindu-Balinese culture. To enrich your knowledge, read more Christmas Tradition in Bali 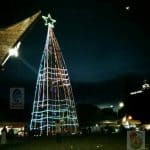 The highlight of this festival is the fireworks and Lettoan procession held on 26 December. Lettoan is a ritual of pig parade  with cultural symbols representing the three dimensions of human life.

The three symbols used are: 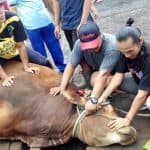 North Sumatera is inhabited by the Batak Tribe. The people in this region purchase animals which bought with the money saved by the people. There is also a tradition called marbinda, a tradition of  slaughtering animals that symbolize togetherness and mutual cooperation.

Types of sacrificial animals offered can be pigs, oxen, or buffalo and the flesh will be distributed to all the people who have donated. 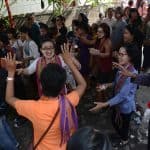 One of the areas in the northern Jakarta has a unique way to celebrate Christmas. Tugu village in Cilincing North Jakarta is said to continue the tradition that used to be its predecessors who are Portuguese. After doing worship at the church,  some people will visit other houses with music.

Families that are visited  must join the entourage then visit the next houses until the last house (it symbolizes hospitality).  At the end of the show everyone will be bathed in colorful powder as a symbol of “Atonement and Mutual Forgiveness” at the end of the year to pass. 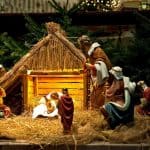 In December, the local pastor in Flores hold a competition for Kandang Natal or Christmas Coop. This is to remind again that Jesus Christ was born in a cage filled with simplicity. However the most fantastic celebration in this island is . But the fascinating Christmas celebration is the loud banging coming out of the bamboo.

Based on the culture of Manggarai and Flores, this boom is used as a notice to other villages which lie far enough that there are community leaders who experience misfortune. But today’s bamboo cannon is used as an expression of joy over the birth of Jesus Christ. 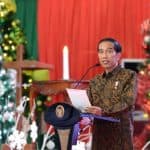 The event was first held in 1993 and it always celebrated every year. Until 2013 the National Christmas Celebration always held in DKI Jakarta, the place that usually used is Jakarta Convention Center.  Since 2014, the celebration is held in many countries and Jakarta is not only the host country to celebrate national Christmas Day.

The History of Asmat Tribe Indonesia