Christmas is nearly come. Although Christian is not a majority belief in Indonesia, all Indonesians could feel the Christmas atmosphere everywhere. While you visit the department store as the example, you would find the interior design of department store will be decorated like in a Christmas celebration. It is proven that Indonesia has the great tolerance for beliefs.

The great tolerance also looked great in Bali. As you know almost of Bali is Hindus. However, there are a number of people who follow Christian or Catholic as their beliefs. When Christmas comes, all of the Balinese will honor them. Even some of Balinese will join to celebrate the tradition of Christmas. Here are the 8 Christmas Tradition in Bali. 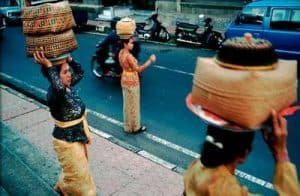 Ngejot in Bali is the tradition of giving the bacon or foods to the neighbor on Christmas day. The Christians will share their foods to the neighbor as the form of thanksgiving. It symbolize of sharing a happiness toward others. It also a symbol of a harmonious life among the different beliefs. They would wrap the foods in a unique container. They would also bring it on their head.

The Christians will cook some delicious dishes to be shared. Special for Islamic neighbor, they would not give them bacon because they must not eat it. You can imagine how harmonious they are. They could life well with their different beliefs.

Most of Christian villages are located on the south island of Bali. When Christmas comes, you would see a lot of road decorations called Penjor. Penjor is the unique stuff in Bali. It made off the plaited of young-coconut leaves. Then it is hung on a bamboo tree. Actually, Penjor is made in every big day in Bali.

Making Penjor traditions has been already done since so many years ago. As the time changes, the penjor is completed with some unique ornaments like the colored lamps. Penjor stands firmly in front of each Balinese’s house. They also makes the Christmas three with unusual thing. All of the stuff for Christmas day in Bali is collaborated to the Bali culture.

Something unique tradition in Balinese Christmas is the competition of making the Christmas tree. The competition will be held in some regions of Bali. In Denpasar, there is a Christmas three made of the chicken fur. Usually, the people will make the tree with the used goods.

The aim of the competition is to campaign the government program to reuse the second goods. There is also the Christmas tree made of the used bottles. They make the creation on it so it could shape a beautiful Christmas tree. 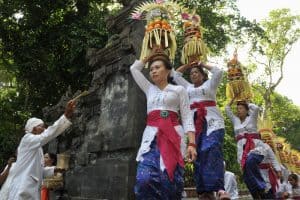 Gebogan is usually carried by the women on their head. The cone of fruits will be decorated with plaits of young coconut-tree. The gebogan looks so beautiful because of the combination of the fruit’s color.

Nampah is the tradition of cutting some animals for foods on Christmas day in Bali. As the example in Denpasar, the Christian will cut a pig for being cooked as the Balinese cuisine. They cut the pig in the morning before they go to the church.

Before cutting the pig, they will utter some prayer to Gods. Nampah tradition is actually adapted from Hindus tradition. That is why Bali is well known as the great tolerance. In a big day of their belief, they will honour each other. 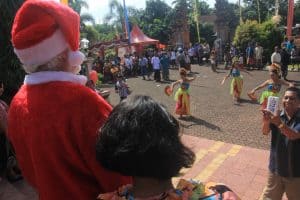 Palasari is the oldest Catholic village in Bali. Palasari is located 150 km from Denpasar, Bali. On a Christmas day, the people in Palasari wear Balinese traditional clothing. They also set the penjor in front of their houses. This is the normal Christmas tradition in Bali.

One thing that makes it different is the traditional dancing performance on the yard. All of people in Palasari gather to watch the performance. The girls of Palasari village dance beautifully accompany with Balinese traditional gamelan (music). All the people are joyful when Christmas day comes.

In Banjar Tuka (a village in Kuta Bali), the Christians wear the traditional clothing for doing Christmas mass. The women wear the ‘kabaya’, while the men wear the ‘sarong’ and ‘udeng’. They usually go to Paroki Tritunggal Mahakudus church. Before entering the church, they must splash some water on their face. It is believed as the holy water.

Inside the church, so much fruits and foods are available. It is a ritual offerings combination between Hindus and Christian beliefs. This tradition has already run since 78 years ago. That is why they still maintain this culture up to now.

10 Ways How To Avoid Scams In Bali Must Know