Locally known as Djawa or Jawa, Java is the political, geographic and economic center of the Indonesia.  Java is where most of Indonesia’s history took place with Jakarta being part of the island. Most of the country’s history took place in Java as it was the core of the colonial Dutch East Indies. This is where the center of Hindu-Buddhist empires and the Islamic sultanates began. On the other hand, Chain of volcanoes lines up from east to west—making Java the fifth largest island of Indonesia.

Besides being a home to 56.7 percent of the Indonesian population, Java is also birds’ paradise with more than 450 different bird species around. The island is pretty much crowded with people coming from many region in hope to find a better life. There are officially four provinces and two special regions in Java. Namely,West Java, Central Java, East Java, and Banten as provinces. Then, Jakarta and Yogyakarta as the two special regions.

Java contains more or less 112 volcanoes, thirty-eight of which are active. The highest volcano in Java is Mount Semeru at 12,060 feet (3,676 meters). Meanwhile, the most active volcano is Mount Merapi (2,914 m). There are series of discontinuous plateaus lies south of the volcanic belt and reaches an elevation of about 1,000 feet (300 meters). The island’s longest rivers are the 372 miles (600 km) long Solo River and the Brantas River. The Solo River flows north from Tawu volcano then eastwards to Java Sea, near the city of Surabaya.

The average temperature throughout the year is between 22 ° C to 29 ° C, with an average humidity of 75%. The rainy season begins in October and ends in April, meanwhile the highest rainfall generally occurs in the months of January and February. Rainfall in West Java reached approximately above 4,000 mm per year, while in the northern coast of East Java is just reached 900 mm per year.

Before Java has been developed and growth like now, There are several histories that an evidence Java already became island which has a high potential become developed island.

In 1891, the first early hominid specimens were found in Java island.  The cranial fossil remains, that commonly known as “Java man” is the first early hominid specimen found outside of Europe. Then there are several ones found at various locations along the river valleys, now generally classified in the species Homo erectus. “Java Man” is predicted to have occupied Java from about 1,000,000 to 500,000 years B.C.E.

The holding of the agreement between the Kingdom of Sunda and the Portuguese in Malaka in 1522 is the beginning of Java’s relationship with the colonial powers of Europe. With the agreement, Portuguese only allowed in Malaka. In 1596, an expedition led by Cornelis de Houtman, is the beginning of a relationship between Indonesia and the Netherlands. At the end of the 18th century, the Dutch have managed to expand their influence in the sultanates in the island of Java and so the colonization begins. The Java is main role in the beginning of colonization is as a rice-producing areas.

In 1811, the British succeed conquering Java and Java become part of Kingdom of Great Britain, with Sir Stamford Raffles as the Governor-General. Under the Treaty of Paris, Java be returned to the Netherlands in 1814.

From the 18th century to the 19th century, Java experiencing rapid population growth. The rapid population growth believed to happen because of Tanam Paksa System that is detrimental to society. Many couples trying to have more children in the hope of increasing the number of family members that can help pay taxes and earn a living. In 1820, an outbreak of cholera in Java claimed 100,000 victims.

Java known as the island of arts. There are several traditional arts spread around in all territory of Java. Both of dances, houses, even Fabrics. Here several arts from Java, such as:

There are some Indonesian cultures in traditional dances of Java. Such as: 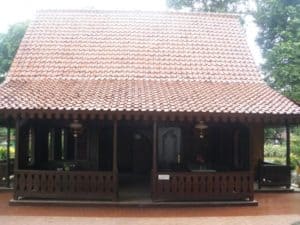 The characteristic of Kebaya house is that it has a big yard that work as parlour for guests, well and the family cemetery on the side of the house, and the walls of the house are made of panels that can be opened and shifted to the edges. On the other hand, Kebaya house can be found in Jakarta.

The house is divided into two parts. First part is the one that can be seen by public, while the other part is limited only to family and close relatives. 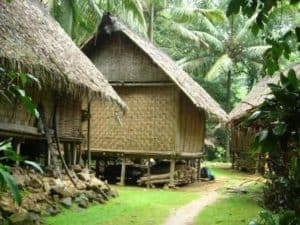 Baduy roofs of traditional house are made of leaves called sulah nyanda. One sulah nyanda is made longer and have a lower slope at the bottom of the roof frame.  Baduy House commonly found in Banten province.

The house’s lock are made with two pieces of wood that lay crosswise pulled or pushed from the outside of the house. 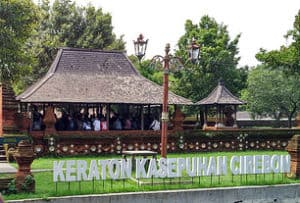 Kasepuhan Cirebon House were constructed around 1529 by Prince Cakrabuana, the son of Prabu Siliwangi from the Kingdom of Padjadjaran.

Then, this traditional house can be found in West Java, especially Cirebon. Here are the important parts in Kasepuhan Cirebon: 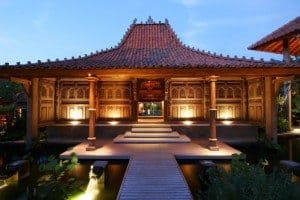 The Joglo roof is different with the other type of Javanese roof because it consists of columns that become higher as it go to the center.The four innermost main house columns are often the tallest, while the outer columns are the lowest. On the other hand, Joglo house mainly built in Central Java.

These four innermost house columns—surmounted by a unique structural element known as tumpang sari—support a roof that is the steepest of all type of Javanese roof; almost look like a pyramid, except that it comes to two points rather than a single one.

Part of Joglo are:

There are also many types of Joglo house such as: 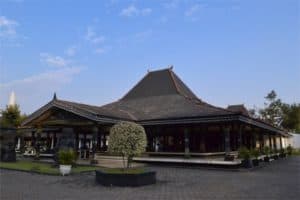 This house serve as a place for religious events or empire events.Its also used in “Jumenengan” which a show when an emperor ascended the throne.

Bangsal Kencono house has many ornaments and details from the influence of Hinduism, for example, the number of poles as many as seven symbolizes perfection.

Lurik is the clothing typically wear by male in the countryside among the peoples of Java. Lurik itself comes from Javanese language, “Lorek” which means an epitome of simplicity.

On the other hand, Lurik is believed that has been around since the days of the Mataram kingdom, evidenced by the discovery of inscription that tells about it.

Moreover, not only male, Lurik also used to make woman’s dress in the form of kebaya.

There are also well-known fabrics from Java called Batik. Batik mostly made in every territory of Java. Moreover, there are many kinds of Batik.Therefore, it makes Batik become one of Most Beautiful Fabric in Indonesia and already entered international stage especially in fashion terms.

With a density of 1,317 people / km, Java became the island where more than 60% of the population Indonesia live.

Here is the list of population in Java in 2005:

At the beginning, Java economy is highly dependent on the rice fields only until sugarcane, coffee, rubber, tea, and quinine were introduced by the Netherlands. Java Post Road construction by Daendels in the early 19th century become the initial ease of transportation. The toll roads built and expanded since the Soeharto era until now, has connecting urban centers with the surrounding area.

On this very day, industry, business and trade, as well as services has evolve in Jakarta, Surabaya, Semarang and Bandung, while Yogyakarta, Surakarta, and Cirebon in charge of keeping the cultural heritage of the Palace and become the center arts, culture and tourism. Towns along the northern coast of Java, especially around Cilegon, Tangerang, Bekasi, Karawang, Gresik and Sidoarjo become industrial area.

Java island is one of developed island among other in archipelago. Most of industries make Java as one of their focus to spread its products. Moreover, the location of Java also support in the term of economy to growth. That’s why many people want to transmigrate from their place to Java island.