Home » Place » Famous Architecture In Indonesia Will Leave You in Awe

Famous Architecture In Indonesia Will Leave You in Awe

Indonesia as one of the countries with the largest population in the world is the right market share for various businesses from all countries.

That’s why various companies make Indonesia as its business center. Both local and foreign companies. This is what causes high-rise buildings intended as offices to mushroom in Indonesia, especially Jakarta.

Building a building turned out to be not just a matter of making enough space for offices. But also how to design a building to have more value in aesthetic terms, so that it is pleasing to the eye. Here are Famous Architecture In Indonesia : 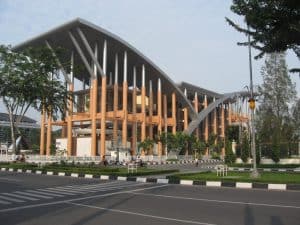 The name Soeman HS was taken from the name of a famous poet from Riau, who was also a descendant of Tapanuli.

This building consists of 6 floors, which consist of reading room and book storage room, auditorium, Malay Culture Room, cafe, Energy Corner and so on.

The Malay Culture Chamber stores various literature related to Malay culture. The architecture of this building is inspired by the form of a small table to read the Koran, also known as rehal. 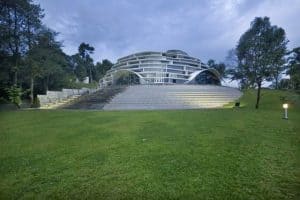 The most beautiful building in Indonesia then belongs to the state contractor, WIKA, which is devoted to the development of human resources and is general.

The architecture itself adopted a lot of Javanese wayang philosophy, which can be seen from naming its buildings, including Giri Sasana, Giri Wijaya, Giri Budaya, Giri Pustaka and Giri Boga.

One of the most beautiful buildings in Indonesia offers views to three different directions, including Mount Pangrango, Mount Salak and Mount Geulis.

With the location so close to nature, the construction of this building is expected to bring trainees closer to God, humans and nature. So that it can give birth to modern virtuous leaders and is characterized by Indonesian wisdom. 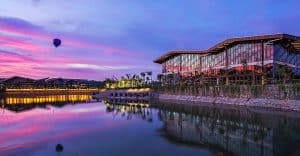 Designed by an architect from the United States Jerde, The Breeze presents the concept of an open-plan mall with green open space, or also known as the open air lifestyle.

This is in accordance with the principle of the developer, namely Sinar Mas Land, which promotes environmental sustainability in its business trip.

In addition, The Breeze turned out to be one of 40 other buildings in the category of the Best Shopping Center in the world. 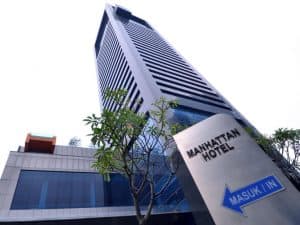 This five-star hotel located in the golden triangle area in South Jakarta combines the design and architectural style of hotels in New York.

This building was designed by Denton Corker Mashall Architects, an architect firm from Melbourne, Australia.

One of the top parts of the building looks like the Uno Stacko game, where one of the blocks is trying to be removed from the arrangement.

As a result, several floors look more protruding than the surrounding floors. 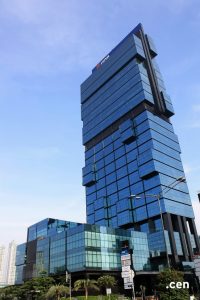 If the Manhattan Hotel looks like an Uno Stacko game, then UOB Buana, located on Jalan Jendral Soedirman, looks more like a lego arrangement.

This 44-storey building was actually planned to become a hotel, which in its journey finally turned into an office building.

The color of the window which is dominated by dark blue makes the area in Jalan M.H. Thamrin more fresh to the eye. At night, this building offers a fantastic colorful night view.

See also the best landmarks in Bali Indonesia for your knowledge. 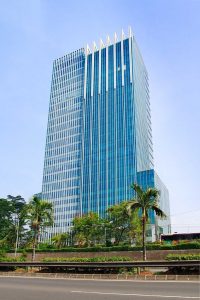 Menara Palma is located in Kuningan area, Jakarta. One of the towers has a different tilt angle and looks like it’s leaning against another tower. This tower has become home to many offices for years.

Palma Tower consists of 25 floors, 17 of them are offices, while the other are retails and structured parking lot plus basement parking lot.

The architect appointed by the owner, DCM, has a special mission.

They are required to be able to design buildings that reflect the modern management of companies engaged in the plantation sector.

With this unique design, the Palma Tower is expected to contribute positively to the Jakarta skyline.

You may see also best places to visit for wildlife in Indonesia. 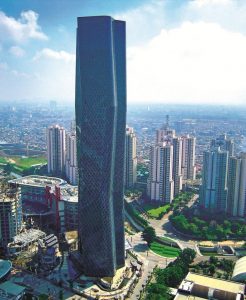 The building which is located at HR Rasuna Said, Kuningan, Jakarta is classified as a premium class office building with grade A +. This building is one of the most beautiful buildings in Indonesia.

The building owned by Bakrie Group was completed in 2008 with a building height of 210 meters.

Developed by PT Bakrieland Development, this building is very unique because of its curvy, wide and asymmetrical shape.

An unnatural twist of style and design which is an interlock. The use of dark blue glass also makes this building look very exotic. Read also best temple in Lombok Indonesia.

8. The Crystal of Knowledge, University of Indonesia, Depok

This is a library located in the University of Indonesia complex, Depok.

Located on the edge of a lake, this 2.5 hectare library holds more than six million book collections from various disciplines. 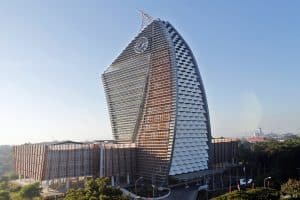 Located in the campus complex of the Makassar State University, this building was inspired by the typical symbol of the Bugis community, namely the pinisi boat. This building also has another name, Tellu Cappa, which means three peaks.

This 17-storey building was designed by the winner of a building architecture competition named Yu Sing. The main concept is the deepening of local wisdom combined with the construction of modern buildings today. 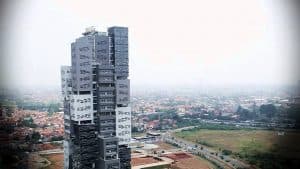 This building has a good rainwater storage system. This is expected to help overcome the groundwater crisis which is now beginning to feel its impact. The 22-storey Bina Nusantara Campus Building has concepts and forms that are no less unique. Regular zoning, environmental friendliness, and energy saving are the concepts initiated by Budiman Hendropurnomo, the architect. This idea was poured through a checkered design in a building with lots of large windows to maximize natural lighting. The campus also has a rainwater collection system that can be used for landscape watering, toilets, and as a contribution in overcoming the groundwater crisis. 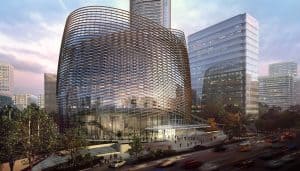 In 2013, the New Media Tower Building succeeded in becoming the first winner of a new energy-efficient building category in the National Energy Efficiency Award (PEEN). Unique shape resembling an eggshell, with a gray protrusion from the perforated metal sheath. Through the concept of environmentally friendly architecture and high technology that is applied, this 12-storey building can save energy up to 53.25 kWH per year per square meter. Application of double skin facade using aluminum panels can reduce heat up to 70 percent so as to save on the use of air conditioning (AC). The walls are porous with different diameter sizes for each hole, to produce maximum light. The super foam mixture with concrete makes the wall can reduce heat and is able to reduce sound. 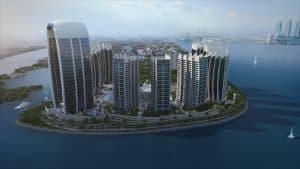 Born from the work of Tom Wright (WS Atkins Consultants, England) with a simple concept of nautical but dynamic themes, Regatta Towers is able to become an icon on the edge of the Bay of Jakarta. Clusters of apartment buildings become a symbol of a ship with an expanded screen that departs following the compass direction, while presenting a panoramic view of the Java Sea.

The uniqueness of the Regatta design resulting from the collaboration of PT Intiland Development Tbk and PT Global Ekabuana received the Prix d’Excellence award in 2010, which was given by the International Real Estate Federation, FIABCI.

The complex which is still under development has 10 apartment towers as high as 24 floors and 1 hotel. Uniquely, each lobby tower has a different design according to the name of each tower (Dubai, Miami, Monte Carlo, Rio de Janeiro, and New York). The Regatta Hotel form that resembles the letter O is very unique and has the potential to become a world-level icon.

Those are the famous architectures in Indonesia that had become unspoken national treasure for the inhabitants. Hopefully, you can come to see these buildings while having a vacation in Indonesia.