“Bhinneka Tunggal Ika” or unity in diversity means that even though Indonesia is a plural country, the people are respecting pluralism; including the differences in culture, language, race, and religion. As we know that Borobudur temple is the largest Buddhist temple in the world and categorized as one of the seven wonders by UNESCO (United Nations Educational, Scientific and Cultural Organization).

Borobudur temple is a tourist attraction which is located in Magelang, Central Java. Some of you might be wondering whether Borobudur is the one and only temple in Magelang, right? No. There are other temples in Magelang which will amaze you as well. 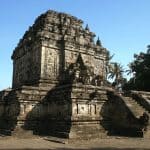 This temple is located approximately 3 km from the well-know Borobudur temple. This is the second most famous Buddhist temple in Magelang after Borobudur, it was also built in the same year as Borobudur during Syailendra dynasty.

Mendut temple has rectangular shape with a storied roof and decorated with small stupas and the entrance is facing the sunset direction. Increase your knowledge with read Most Beautiful Temples in Indonesia.

This temple looks beautiful and sturdy even if you see it from distance, moreover you will find attractive ornaments which are carved neatly. The ornaments are picturing some kinds of fauna such as the bird and the turtle, the ape and the the bird of war, Brahmin and the crab, etc.

There are 8 Boddhisattva (the candidate of Buddha) reliefs which are bigger than those in Borobudur. inside the temple, there are 3 high statues which is enlightened by golden light. 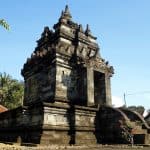 Pawon or Brajalan temple is the second destination to go after Borobudur temple, located in between Borobudur and Mendut temple this place is becoming a popular place too in Magelang.

Pawon temple is believed to be the place to keep King Indra’s weapon during Syailendra dynasty. However some also believed that this temple is functioned as a place to save ashes, since the name Pawon itself is taken from the word pawuan which means a place to keep awu (ashes). You may want to read about Oldest Temple in Indonesia

Just like Borobudur and Mendut, this temple is also a place for  Bodhisattva statue as a reverence towards King Indra which has completed the Bodhisattva stage but now that statue is gone and the inside part is left empty.

Unlike the other Buddhist temple generally, Pawon temple is more slim and quite look alike Hindu temple. The other attractions in this temple is a carving which depicting a standing Kuwera (God of Wealth), Kinara and Kinari (a pair of bird with human head), and a relief of a flying human in the ceiling. 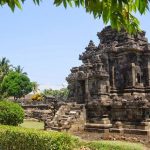 This temple is located in Ngawen Muntilan region or about 5 km to Mendut temple. The background of this Buddhist temple is based upon the discovery of Buddhist statues inside. There are a lion statue decorating every temple’s corner which makes this temple unique.

The shape is almost similar to Hindu temple but if you look more carefully there are stupas and steps which symbolize Buddhist temple in general. The nature around the temple is also still original, there are paddy fields around this temple. Enrich your knowledge with read Largest Temple in Indonesia

The temple complex consists of 5 small temples in parallel line from North to South and the whole temple itself is facing East direction. 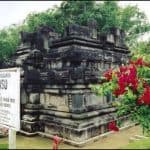 Located 25 km from Borobudur this temple is located in Merapi mountain slopes near the Tlingsing Pabelan river. This temple is named after dog because Asu means dog in Javanese language, a broken statue which nearly look like a dog is found when this temple is discovered for the first time in Sengi region.

Unlike the mentioned temples before, there are flora relief here and also Kinara Kinari which more common to found in other temples. The temple’ height is remain unknown because the ceiling or the roof part is gone, there are Nandhi (cow) statue and rectangular well inside. You may want to read about Buddhist Temple in Bali Indonesia 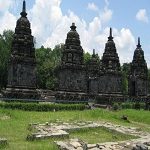 This temple is located right at the edge of Kali Apu which is flowing from Merapi Mountain slope in the West side. This temple is standing side by side with Pendem and Asu temples, and these three temples are called as Sengi temples.

The origin of this temple’s name is quite unsure, whether it is really named Lumbung or being called like that because the shape looks like lumbung (barn to save rice).

This Buddhist temple consists of 17 complex, the main temple is placed in the center and being surrounded by the other 16 temples. There are 9 niches in the North, West, and East and each direction consists of 3 niche but not even one of them is filled with Buddhist statue. Read more about History of Prambanan Temple in Indonesia. 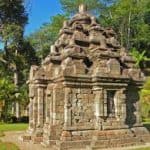 Located in a remote area on the eastern slope of Mount Sumbing, stands a hundreds years old temple named Selogriyo temple. This temple is predicted to be built during Mataram Hindu glorious era and it is still standing now at the altitude of 740 m above the sea level.

Unlike the other temples mentioned above, this temple has Hindu background because there are Ganesha, Durga, Nandiswara, Mahakala, and Agastya statues.

This is the perfect destination for those who like hiking because the visitors need to get through rocky path for 2 km long but the visitors can enjoy the beautiful countryside atmosphere so it will be worthy. 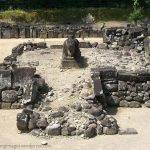 Canggal or Mount Wukir temple is a Hindu temple located in the Mount Merapi slope. People believed that this is the oldest temple established during King Sanjaya regine 732 M. This temple wreckage and its inscription are found in 1897, you will find Lord Shiva statue, yoni altar, and Andini or the statue of female cow. 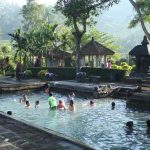 This archaeological site is different with the rest because this temple is in the form of hot water bath which is located in Magelang regency.

Umbul temple is established during King Syailendra dynasty and is named Umbul because the water source that comes from the bottom of the pond is poking like bubble or mumbul.

The whole walls are made of andesite rock and this pond is believed to be functioned as the bathing place for the princes and the princesses. Several rocks are lining in the pool edges and depicts the relief of flora and fauna, you will also find stupa at the top of this temple.

Those temples could be the alternative for those who want to visit new archaeological sites beside Borobudur temple.