The History of Borobudur Temple 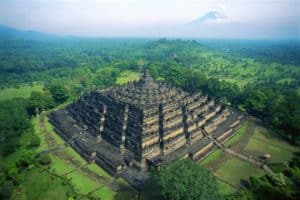 Indonesia is one of the countries that have a rich cultural and historical heritage that is widely known by people from all over the world.

One of the famous attractions for local and foreign tourists is which is not less interesting than beautiful beaches in Bali is Borobudur. It is one of the tourist destinations of the world’s history and heritage that should not be missed. Borobudur Temple is one of the largest temples in Indonesia even in the world. The beauty of this temple is famous to the whole world and once made it as one of the wonders of the world.

Then until now, Borobudur is still used as a place of religious pilgrimage. Annually, Buddhists come from all over Indonesia and abroad to gather at Borobudur to commemorate Vesak Day. In the world of tourism, Borobudur attraction is one of Indonesia’s most visited places every year. And for more details, we will discuss the history of Borobudur below.

The Origin and History of Borobudur Temple 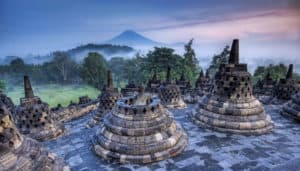 Borobudur is a Buddhist temple located in Borobudur Village, Magelang , Central Java which is about 15 kilometers from Yogyakarta. The temple consists of six square-shaped terrace on which there are three circular courtyard, the wall panels decorated with 2,672 relief and contained the original of 504 Buddha statues.

Borobudur has the most complete collection of Buddhist reliefs in the world. There are stupas that located in the middle and also crowning the building.

This temple is also surrounded by three rows of circular 72 perforated stupa in which there is a statue of Buddha that is sitting cross-legged in the lotus position perfectly with mudra (hand gesture) Dharmachakra mudra (turning the wheel of dharma).

According to the artifacts found, this temple was built by King Samaratungga one of the kingdoms of ancient Mataram kingdom, which is descendant of the Shiailendra House that glorifies the god Indra . This temple is estimated to be built around the year 780 AD and completed in 830 AD.

Then, Experts suspect that the Borobudur temple was designed by a famous architect of that time named Gunadharma and assisted by Visvawarman a prince of Khasmir who is an expert advisor in the Buddhist teachings of Tantra Vajrayana.
Another story about the construction of this temple is not very understandable because there are not much inscriptions that explain about the construction of Borobudur temple.

Borobudur had been hidden and neglected for centuries and been buried under a layer of soil and volcanic ash which then overgrown with trees and shrubs. These conditions then made Borobudur really resembles a hill. Due to lack of information obtained, experts argue that Borobudur temple collapsed in 950 BC due to the terrible eruption of Mount Merapi.

As a result of this eruption, Borobudur temple became collapsed and buried under the land. In addition, at that time Syailendra Buddhism Dynasti began to decline. At that time the Hindu Mataram Kingdom also began to move its administrative center to East Java, which was originally located in Central Java. And the Islamic Mataram Kingdom became more powerful in Central Java. 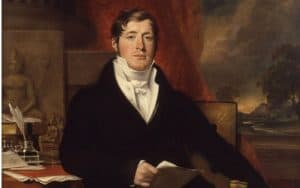 Sir Thomas Stamford Raffles is a British governor who led Indonesia in transition from Dutch to British colonial in 1811 AD -1816 AD. He is considered as the first to uncover the origin of the Borobudur Temple which was originally buried in the ground.

In 1814, Thomas Stamford Raffles got the news of his subordinates that the hill covered with carved stones. Then after hearing the news, Raffles sent an admirer of art and history called Cornelius to clean up the hill. And sure enough, a huge pile of boulders rose into a gigantic pyramid.

Raffles then ordered his subordinates to continue his work, but because of the rush of war this job became dormant. In 1835 AD, Hartman, the Governor-General of the Netherlands continued the process of Borobudur Temple re-discovery which was abandoned by Raffles after England suffered the defeat of the war in reprising its colonies of Indonesia. Hartman employed many workers to dismantle and remove all the obstacles that covered the piles of these stones. He was very interested in the temple he found and did a thorough cleaning of the debris littering this temple. 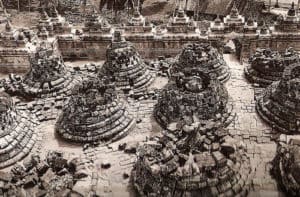 Even though it had been cleaned from all the debris, the soil, and the big wood that covered it, Borobudur temple had not been perfectly formed. Many parts were still missing, and damaged by being buried in the ground for a long time. Realizing this, in 1907-1911 AD, under the leadership of Theodor Van Erp, the Dutch began to restore the temple that does not look perfect.

This restoration is still done with conventional technology, so the relief has not yet formed as the original. The restoration of Borobudur Temple was only done to avoid further damage by removing vulnerable rocks collapsed.

Theodor Van Erp was a figure who had done a great job for the Indonesia because he had saved the ancestral heritage of the Indonesian from more severe damage.

Due to the political, military, and economic turmoil since the First World War, some governments that had ruled in Indonesia from the Dutch colonies, the Japanese colonies, and the Government of the Republic of Indonesia were no longer concerned with this historical treasure. Borobudur temple was left unattended, neglected, and ignored. As time went by, as the state began to improve, on August 10, 1973 further restoration was underway during the presidency of President Soeharto.

The proof of this restoration is a 20-ton inscription that was deliberately made and placed on the northwest side of the temple facing east. Uniquely, the restoration of Borobudur Temple which was under the leadership of Dr. Soekmono ws done by about 600 workers, most of whom are young people of high school graduates. They are the original sons and daughters of the Indonesia, none of them were experts from abroad.

Some parts that were restored from the Borobudur temple at that time include Rapadhatu (place at the bottom of the square), the foot of the temple, Terrace 1, Terrace 2, Terrace 3, and Mother Stupa. Because there are so many parts that needed to be restored, the time required for the process is about 10 years. And the restoration was completely finish on February 23th 1983.

Borobudur Temple in the Present 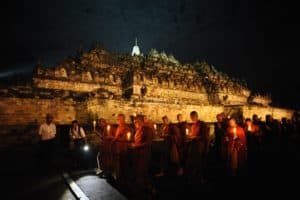 At this time, Borobudur temple becomes one of the most popular tourist destinations in Indonesia. Each year there are about 3.5 million foreign and local tourists who visit and enjoy this building.

In 1991, UNESCO designated the Borobudur Temple as a world heritage building. And also Borobudur temple had become one of the Seven Wonders of the World.

For Buddhists in Indonesia and Southeast Asia, the Borobudur Temple has an important role.

This temple is often used as a venue for some religious vigils. At the feast of Vesak, Buddhists often use this temple as the center of celebration. And on that holy day, this temple is very hemp and filled with visitors who not only come from Indonesia but also from Southeast Asia.

Those are complete explanation about History of Borobudur Temple.

10 Indonesia Business Cultures You Must Know