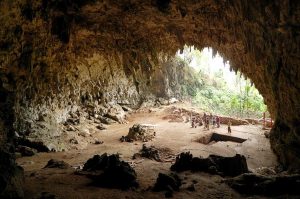 The word of Hobbit was first popular through the trilogy of The Lord of the Rings.

Meanwhile, it was told that the Hobbit is a human dwarf as high as an average of 3 feet or about 1 meter.

The forever-happy Hobbits inhabit the Shire. It is a beautiful place with short houses with grass green color. However, Liang Bua is not The Shire.

Liang Bua is a limestone cave in Liang Bua Village, District of North Rahong, Manggarai Regency. It is located 14 kilometers from north of Ruteng, the capital of Manggarai. The cave view is so great. The  length is about 50 meters with a width of 40 meters

. The ceiling is 25 meters high. The “ceiling” cave is decorated with stalactites that dangle. Liang Bua in Manggarai means cold cave or ice cave and is believed to be the home of Hobbit Flores, called Homo florensiensis, more than 10,000 years ago. That is why Liang Bua is commonly called as Hobbit cave in Indonesia.  (Read also: Largest Caves in Indonesia)

The history of hobbit from Indonesia

Continued excavations in Liang Bua, Flores, East Nusa Tenggara, found new evidence of the age of Homo floresiensis, the more popular being called the “Indonesian hobbit” because of its height of only about one meter. Ancient species of human dwarfs found in Indonesia were extinct faster than previously thought.

Hobbit frame estimated 18,000 years old. Then now researchers from the National Archaeological Research Center (Arkenas Indonesia), Wollongong University (Australia), and the Smithsonian Institution (United States) who conducted excavations from 2007-2014, concluded that the hobbits lived from 60,000 to 100,000 years ago.

This new discovery shows that Indonesian hobbits live 10,000 years earlier than Homo sapiens species. Hobbits were previously regarded as the last relatives in the branches of evolutionary human trees that became extinct.

It is now unclear of their position in the family tree of the human family. They may be descended from a normal high ancestor, who undergoes an evolutionary process of shrinking his height due to being isolated on the island.

Named Homo floresiensis because it is found on the island of Flores, they had small brains which had the same size of a chimpanzee brain, and a skull that resembles Homo erectus, which lives on the plains of Africa and Asia.

However the hobbit has long arms and short legs that refer to the much older evolutionary creatures, known from the bones named Lucy (Australopithecus Afarensis). The hobbit’s limb bones were found to show that the adult skeleton was fully standing about 106 cm.

Functioned as the research location

Liang Bua is more famous as a place of research than tourist attractions. Magnet Liang Bua as a place of research occurred since the era of the 1960s. At that time there was a priest named Theodore Verhoeven who taught the villagers in Liang Bua. Since there are no school facilities, the Dutch pastor who taught at Mataloko Seminary, Ngada, Flores, takes advantage of Liang Bua as a classroom.

It was the start of the priest’s curiosit. He was also part-time archeologist was intrigued. He found many fragments of human bones and various potteries. In 1965, on the sidelines teaching Father Verhoeven dug a section of the Liang Bua floor. The findings are quite shocking. At a depth of less than 1 meter, he found seven modern human skeletons with objects from the stone age of pots, jugs, pickaxes, beads, and bronzes.

Since then, Liang Bua has become famous as a place of archaeological studies that saves forced appeal. Based on that research, it appears that Liang Bua inhabited modern humans since 10 thousand years ago. Long before these periods, there was Hobbit who made the cave as a house.

The discovery of hobbit cave made headlines nearly a decade ago and continues to be controversial until now. Here are the facts of controversial creatures, which amaze the world of science.

Liang Bua actually had been found since colonial time and been used as the site of archaeological and paleontological excavations. Until 1989 there has been found many skeletons of Homo sapiens and various mammals – elephant-like creatures Stegodon, lizards, and rats. Also stone tools such as knives, pickaxes, arrowheads, charcoal, and burning bones, which indicate the level of civilization of its inhabitants.

The Indonesia-Australia excavation cooperation began in 2001 to find traces of the migration of ancestors of Aboriginal Australians in Indonesia. In September 2003, after excavations at a depth of 5 meters found a human-like skeleton but unusually dwarfed. The bones are not petrified but fragile and damp. There are nine individuals but none are complete.

Since its discovery, the hobbit skeleton has been the source of the scientists’ hot debate: whether the specimen is a true extinct species of the human family tree, perhaps a small branch of Homo erectus, a hominid 1.8 million years ago whose proportions are comparable to that of the modern Homo Sapiens.

Meanwhile, some critics argue that the fossil belongs to humans with microcephaly or microcephaly, a condition characterized by a small head and some of which are accompanied by mental retardation. However, a 2007 study revealed, the size of the hobbit brain is about one-third the size of a modern adult human brain. The ratio is inconsistent with the characteristics of microcephalus.

Based on the fossil, the researchers have revealed the face of the hobbit of Flores female sex. He can’t be called beautiful, but certainly his face has a peculiarity. With a background in forensic science, some scientists were able to reconstruct the face of a 1-meter-tall, 30-year-old female hobbit found at Liang Bua in 2003.

The face of the Flores hobbit was announced at the Australian Archaeologists Conference held on December 9-13 at the University of Wollongong.

These all above are the glance information about Hobbit cave in Flores, Indonesia. Nowadays Liang Bua is one of tourism object for the hunter of history. Although already famous as a place of research and tourist attractions, Liang Bua atmosphere still feels quiet. Visiting this place for one of your destinations trip is not such a bad idea.

12 Causes of Transmigration in Indonesia