History of Tsunami Cave in Aceh 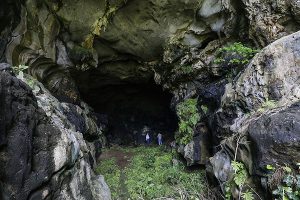 On December 26th 2004, it happened a mega disaster of tsunami in Aceh. It is one of the biggest Natural Disaster in Indonesia. Previously there was a great earthquake on the seabed near Simeuleu Island. At 7.59 AM of local time, a 9.1 to 9.3 magnitude earthquake shook the sea floor in southwest Sumatra, about 20 to 25 kilometers offshore.

In just a few hours, the tsunami waves from the earthquake hit all of the area in Aceh.

At least hundred thousands of people died and millions of people lost their home, schools, and their job. All of activities in Aceh totally stopped in that moment. Some of people that survived from tsunami Aceh claimed to be still traumatized by the incident.

Up to now, some of experts continue to uncover how tsunami in Aceh occurs. It includes looking for evidence whether there was another tsunami in Aceh so many years ago. Not so long after the research begin, cave of tsunami was found. There are actually so many other Largest Caves in Indonesia, however, this cave saves a history. Here is the history of tsunami cave.

A cave located near the city of Banda Aceh keeps a record of the tsunami history that once hit the most western part of Indonesia since thousands of years ago. The cave is very special, allowing sediments that show the history of tsunami events to be absolutely perfect. This cave found near the tsunami site in Lhong, Aceh has traces of giant waves dating up to 7,500 years ago, a rare natural record indicating that the next catastrophe could happen for centuries, or perhaps in decades.

This discovery provided the longest and most detailed timeline for the tsunamis that have occurred in Aceh province. One of them is the 30-meter waves triggered by 9.1 magnitude earthquake on 26 December 2004, which killed 230,000 people in some countries, more than half was from Indonesia.

Researchers in 2011 dug up sand deposits that had been swept into the cave for thousands of years and pile neatly between bat droppings like geologic layers. Radiocarbon analyzes of these materials, including shells and microscopic organisms, provided evidence of 11 tsunamis before 2004. Scientists are still working to determine the size of the waves entering the cave.

The cave they find saves a layer of guano (bat debris) and tsunami debris that goes into the cave. Debris tsunami can be known by looking at the characteristics of the sand and its organisms, for example the presence of mollusca and foraminifera. The researchers dated the sediment and learned that the sediment was formed from 7,500 to 3,000 years ago. The history recorded in the sediment had a message. A big tsunami is not an event that can be ascertained. Great inter-tsunami lags can be very long, but they can be just a few decades.

The 2004 Aceh Tsunami was not the first tsunami to hit Aceh. If the tsunami in 2004 was the first to occur in Aceh over the past 1000 years then we should all be suspicious of those who have triggered the 2004 Aceh tsunami. In fact, tsunami in Aceh has happened several times before 2004. Previously there was tsunami that happened in 1861 and 1907.

The stratigraphic records, the geological sciences that studied layers of rock, in this cave of the sea revealed a sequential layer of sand, bat droppings and other debris carried by the tsunami in the period 7,400 to 2,900 years ago. Stratigraphic records since 2,900 years ago were swept away by the 2004 tsunami. There may be other tsunamis. The researchers knew that there were two devastating earthquakes in the region around 1393 and 1450.

Most of Tsunamis usually occur with recurrence after 200 years. But, there is also a happening with a span of less than 100 years. This research in the tsunami cave is very important to know the history of the tsunami that once struck the Indian Ocean and possibly drowned some of the existing kingdoms. At the same time, it would be functioned to assist geologists to solve future tsunami forecasts.

Usually, a tsunami typically has the repetition period to occur in an area. However, tsunami in Aceh is different. The irregularity of recurrent tsunami time also leaves researchers concerned about not being able to predict when a tsunami will recur in Aceh after the 2004 tsunami.

The repetition of the tsunami in Aceh is irregular, some of them occur in 2,000 years faster. Thus, Indonesians need to be ready at any time. Hopefully, the Acehnese could learn from the tsunami’s history. In addition, it is necessary to provide early knowledge of the Aceh community by incorporating tsunami learning in the education curriculum.

The existence of stone caves scattered on the coast of Aceh is very important to be maintained and preserved. Including, the cave is located in Lhoong, Aceh Besar District. In addition to research, it is useful if the cave was used as a place of learning for future generations. To avoid the mining of mountain rocks near the cave, the government could develop a tour of the tsunami. Moreover, tourists should be limited to the part of the cave that can be entered.

Those are the history of Tsunami cave. The cave finally revealed the big mystery of tsunami in Aceh. It has been so many years passed since the big disaster occurred in Aceh. Aceh today has grown up in a beautiful city. The bad dream has passed, the good one is waiting. For further inormation about Aceh, you could see Traditions in Aceh Indonesia.

10 Meeting and Greeting Customs in Indonesia

20 Interesting Facts about the Climate in Indonesia