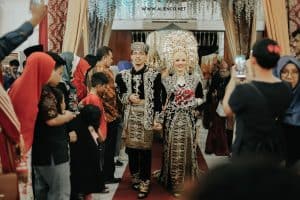 Wedding is every person’s dream. Finding the right person and invite them to take care of each other and spend the rest of your life together is one of the goal that everyone dream of. From getting know to each other to falling in love together must be a surreal experience for everybody. That’s why for some people weeding is an important event in their respective life.

In Indonesia, wedding ceremony sometimes can be unique. While the procedure is almost the same in every region, the celebration can be different due to different culture and lifestyle. This difference proves that Indonesia is a rich country with various kind of cultural practice and belief. Here are some of the most unique and famous bridal ceremony in Indonesia

The battle in this wedding is not in form of physical battle, but more in form of the official meeting between both bride and groom. This ceremony is held by both the couple singing and dancing among the guest. This is also a welcome greetings for both bride’s and groom’s family.

The couple chooses the song respectively and began to sing one by one. Usually, they choose traditional song from Aceh to adjust with the dance.

This tradition derives from generation to generation. The groom is blocked by a long shawl to get close to the bride. His family and he needs to fulfil the bride’s wishes to broken the shawl and take the woman as his bride.

This tradition has a purpose to make both family closer since they build a new big family by uniting two family to one. This ceremony can also test the groom’s seriousness to marry his bride.

There are steps in Balinese wedding. First of all, there’s Ngekeb ceremony, which prepares the bride to be a mother. A bride should stay in her bed for sometimes until her family pick her up to another ceremony. Then, there is Mungkah Lawang, which the bride’s family brings her to her husband’s house.

After that, there’s Mesegehagung ceremony where the groom’s family welcomes the arrival of the bride. Uniquely, the bride is delivered using decorated dooly. After the meeting, both of the couple will be purified in Madengen-dengen. Finally, the weeding is closed by prayer and thoughts led by local clerics, called Mewidhi Widana.

Merak Dance is created by Raden Tjetje Somantri in 1950s. This dance is very popular in West Java and they use this dance to welcome the groom in a wedding ceremony.

This dance is usually brought by a group of people who dressed as a Merak bird from Papua, Indonesia. West Javanese Gamelan accompanies the dance to depict the beauty and bravery of a young male Merak to attract his woman.

They also use a cleric or it’s called Ki Lengser in Sundanese language to give advises and prayers to both bride and groom.

If you think that Jakarta doesn’t have tribe because they are modern city, you’re very wrong. There’s one dominant local tribe in Jakarta called Betawi. They also have unique ceremony practiced in every wedding event.

It’s called Palang Pintu. It’s a tradition where the groom family is escorted their son to the bride’s house. They should bring Roti Buaya (Alligator-shaped cake) and when they arrive in front of the bride house, a representative from the groom should explain what their purpose is using pantun, a four short phrases poem.

Then the representative from the bride will answer the pantun with another pantun. That’s the interesting part lies where both parties answering each other’s pantun.

In Lombok, Nusa Tenggara Barat, there’s a unique way to marry a woman, it’s by abducting her. Yes, you hear it right. Sasak man who wants to marry a Sasak woman will abduct her and place her in his family house. The abduction isn’t criminal-wise practiced. There are steps and methods to do so.

After abduction, woman’s family will report it to the local leader that their daughter is abducted. Then, the groom’s family will come to the bride’s family to explain the situation. From there, It begins the negotiation about wedding plans.

In those specific area, there’s one special performance where in every wedding event, a group of people will do a comedy theatre that depicts life after marriage. This performance has purpose as simulation to what life after marriage is like. It contains advices, prayers, and wishes for the couple. Moreover, Gamelan music accompanies this performance, enhancing the richness of its cultural practice.

Tana Toraja tribe wedding lies in class hierarchy. The higher social status a woman has, the higher price that the groom should pay in the wedding. In Toraja’s tradition, the wedding begins with a long cavalcade before the couple arrives in a big and expensive wedding venue. There’s also traditional dance and song to celebrate the couple’s happiness.

Javanese wedding is one of the most popular wedding in Indonesia due to the fact that this weeding is heavily broadcasted in national television in recent years. Each ceremony might differs one to another, but one thing for sure, in Yogyakarta Palace, there’s one definite tradition that’s Nyantri.

Nyantri is the time when both groom and bride meet each other two or three days before marriage. This tradition begins in a long time ago where a bride and a groom doesn’t really now about each other. They even meet for the first time in the wedding. That’s why some men run away from the wedding probably due to the fact that it’s not his choice.

That’s why there’s Nyantri, where the groom spends two to three days to spend some times with the groom to get to know each other.

While in Toraja, the groom should offer his highest asset to the bride, it looks like it’s a different story in Buton. Here, both couple gives free money to single girl who comes to the wedding. By giving the money, the couple hopes that the girl will find her future husband due to a cultural belief lies in the fresh married couple blessing in the money. Moreover, it’s recommended that the girl uses her free money to buy sweet foods and furniture.

11. Prohibition to Go to the Bathroom for Three Days

This tradition is a little bit extreme, but it’s true. In Tidung tribe, East Kalimantan, both couple can’t go to bathroom for 72 hours, meaning they are not allowed to urinate for three days. This tradition has purpose to avoid bad things from happening in their after marriage life. That’s why when both couple practices this ritual, they don’t eat and drink too much and family member participates to watch over their condition.

Those are some unique to extreme wedding ceremony in Indonesia. For a multicultural country, it’s depicted clearly on how each tribes in different region practice their wedding ceremony which derives from generation to generation. From Sumatra to Papua, each has its own unique ceremony and it’s always interesting thing to know and understand its root and purpose.

7 Best Time And Place To Surf in Indonesia