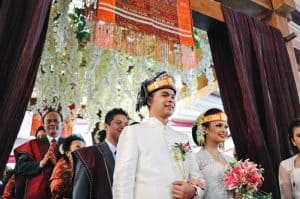 Talking about marriage is definitely anyone couples and people want to do a sacred and historical ceremony in a lively, luxurious and unforgettable life. Not a few couples who spend hundreds or even billions of rupiah to hold their wedding party.

Wedding is a sacred, true and life-long promise between lovers to establish a beautiful relationship at the level of a happy domestic life. Interesting thing and unique wedding venues in Jakarta you should know.

But who would have thought in a marriage other facts, could be a fact that is unknown to some people in Indonesia. Well, to find out what are the facts about Indonesia weddings, here are examples and explanations:

One of the facts about Indonesia wedding and the common tradition of marriage is to hold an engagement event first.

This is so that couples can be bound by promises to each other before holding a real marriage. Usually, when the couple is holding a ceremony there is according to tradition the origin of one partner, generally the tradition of the woman.

Then followed by a shower or bath with flower water by both parents, then asking for the blessing of the parents, and the top program by installing a pair of fiance rings that had been prepared long before. The following samples and facts about Indonesian wedding celebration and processing.

Especially for Muslim couples, there is one ceremony that should not be missed, namely a Thanksgiving event with prayers and recitation of the Quranic verses.

The event aims to give thanks, offer prayers for the smooth running of the wedding later and ask for prayers from relatives for his blessing. Usually, couples attend this event using traditional clothing such as Muslim clothing or polite kebaya and veils. This program is very sacred and full of perseverance in Islam.

The splash event is a tradition and the facts about Indonesia weddings are interesting and also unique. Each bride will be bathed with water mixed with fragrant flowers, and also after that, there is a slinging ritual. The sample of wedding etiquette in Indonesia also characteristics.And also other customary habits such as washing the feet of both parents, to ask for the blessing of parents.

This aims to purify themselves before the wedding begins and also begs to be launched in every process before the event. This habit has also been carried out until now and is still maintained in tradition. Especially for the Javanese tradition, this Sundanese tradition is very famous.

The role of clothing in a marriage is very important because this sacred meaningful event is indeed done in a lifetime. Couples who have a strong commitment will certainly determine the choice of clothing that is suitable and elegant to wear on the big day.

Examples of Indonesian-style wedding attire that is usually worn in the form of kebaya clothes, traditional clothing, international clothing, and also Muslim clothing. Each selected clothing usually has a meaning and also a certain meaning, and will be stored for the whole and lifetime of the couple. You should know the custom of Sundanese wedding traditions and the ceremony.

5. Preparation of Handover for the Bride

One more fact about Indonesia wedding is that there is a handover event in the form of goods or objects to the bride. This is an old tradition and until now it has become a symbol that the woman has been proposed by a man or her lover.

The items carried are usually in the form of women’s accessories such as gold, makeup, clothing, worship tools, and so on. The purpose of this event is to pay homage to the bride, that she is indeed worthy of marriage and has the right to be a wife to her husband.

6. Events for Applying for the Bride

One event that is important for couples who will get married is an application event. This program meant that the man’s lover was sure and willing to choose the woman to be a life partner at the time of the wedding. Here they are Balinese wedding traditions, ceremony, and reception.

Application programs in Indonesia are generally in the form of delivery of some items such as dowry or applications, jewelry items, as well as some fruits, cakes or bread and so on.

On the application in the Muslim tradition, women are usually not allowed to meet the man until the wedding day arrives. However, normally there is a meeting between the two partners during this application. Applications also discuss the agenda for setting a wedding date and family party.

The other facts about Indonesia wedding are different traditional traditions that are carried out in every region in Indonesia. For example, the tradition in North Sumatra, before holding a marriage generally the couple will hold a traditional ceremony.

This program is quite lively and very grand, generally for those who have excess funds can perform this traditional ceremony. The aim is to introduce candidate pairs and also respect existing traditions. Likewise regions such as in Bali, Kalimantan, Sulawesi they also have unique customary traditions. Tradition of Javanese wedding culture procession and ceremonies.

8. Fasting for the Bride

Traditions or other habits that the couple will decipher are through fasting. Indeed not all couples do this, this goal is done one of them is praying and asking God for a smooth marriage.

And also as a tradition so that couples especially women will look more beautiful at a wedding later. Marriage has its own uniqueness in the process of its implementation, this is because the old culture is carried out and maintains the continuity of tradition in Indonesia.

9. The fact of Siri’s wedding

Maybe this only exists in Indonesia, namely the facts about Indonesia weddings, namely siri marriage. This siri marriage was carried out without permission from the government, aka KUA (Office of Religious Affairs).

Marriage occurs when there is a contract or agreement between the couple by carrying out a siri marriage. The good side of this marriage is also called legitimate in the eyes of religion, so anyone can do this marriage.

However, on the other hand, this marriage is illegal in the eyes of the state, because there is no legal evidence and also the right for women will be greatly harmed if the man commits violence or acts of fraud. So, going back to the couple whether they want to choose a marriage legally or a Siri marriage. Hence types of Indonesian wedding culture ceremonies and customs.

Facts about other Indonesian weddings, namely the occurrence of early marriage. Cases that occur can be due to economic pressure, forced marriage, or because the woman has run out before marriage. This factor can cause the couple not to be ready to live a household life.

The bad impact of early marriage can lead to psychology, unpreparedness of women’s organs, and unharmonious marriages. However, unfortunately, this is still the case until now, how good the role of government and parental awareness is to urge that early marriage be prevented except for emergency reasons.

Aside from the above explanation, the following is still the other facts about Indonesia wedding that you need to know:

So the explanation of the 14 facts about Indonesia wedding, may be useful and become known. See you.