10 Surprising Facts about Slums in Jakarta 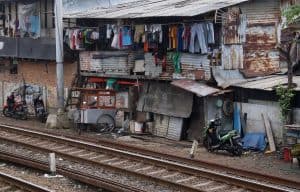 The slums are an area of high population density in a city generally populated by the poor people. Slum areas are a neglected part of urban development. This is indicated by demographic social conditions in slum areas such as high population density, unfit and inadequate environmental conditions and lack of educational facilities, health and socio-cultural infrastructure.

The growth of slum areas occurs due to the unavoidable flow of urbanization. In Jakarta, you might find lots of slums area behind its high skyscrapers. Those are facts about slums in Jakarta that you should know.

RW is the short of “Rukun Warga” which is used for the name of a complex of region in Jakarta.  It is listed that there are at least 220 RWs that categorized as slums area. In order to register a slum house, the Jakarta BPS measures a number of things. Among them are indicators of vulnerability to fire and floods, drainage conditions, population density, trash hauling, and the number of puddles. The results of this study also assessed that the area of North Jakarta, is the most slums. In the region recorded as many as 96 RW slums.

If you are visiting the Penjaringan Jakarta area, you will find one of the worst slum areas in Jakarta. Garbage is not the only source of odor. Former animal feces scattered in the middle of the road apparently contribute to air pollution. Although the smell is not dominating, the life of residents RW 017 Penjaringan looks normal.

Residents here generally open stalls for additional income. Then husbands work outside to be a motorcycle or taxi driver. While the wives at home keeps the stall. Not only the shops owned by residents, a number of peddlers also seen passing by in the middle of the village.The presence of a peddler seems to make a lot of garbage plastic scattered in front of residents’ houses.

In Jakarta there are more than 220 slum dwellings that are crowded and poor. If you want to see extreme poverty, then do not have to come to Jakarta. Wanting to see the extreme wealth is also in Jakarta, this is where the extremes are both there. Poverty in Jakarta is different from that in other parts of Indonesia. In fact, when compared in the remote area, poverty in Jakarta is somewhat extreme. In remote areas, poor people can still enjoy the natural resources, can stay in the house with a large yard, then it does not happen in Jakarta.

The number of densely populated slums in Jakarta is considered to be a trigger for conflict between residents living in it. Therefore, the more densely populated the higher the diversity of behavior, culture, religion, and tribal residents. The more densely populated areas are also caused many diverse. Some people often have the different opinions about something that will cause their conflict. Besides low education and lack of awareness, the community can not organize settlements become healthier.

If you travel to Jakarta, do not just look at skyscrapers or a magnificent mall. There is a unique tour to the slums that make foreign tourists curious. This is the Jakarta Hidden Tour, a tour operator whose name has already crossed the buana. Not a tourist for fun, but as the name implies, Jakarta Hidden Tour is a tour to hidden places. Precisely, to places full of poverty and 180 degree proportion of Jakarta’s famous glamorous.

Tourists will be invited to places or settlements that are far from worthy words. Tourists can see the houses that are only made of potluck and filled with crowded by one family. Tourists can meet directly with people who have severe illness, but can only live resigned because there is no cost. Until, tourists can carry small children who are malnourished.

The rapid growth of population in Jakarta caused some people who live in the city, living in a less decent place. In the UN-Habitat report of 2012, 23 percent of Jakarta’s urban population lives in slums. The rapid urbanization of up to 1.7 percent per year resulted in the growth of slums. The rapid rate of population growth is not matched by the provision of adequate infrastructure. The infrastructure development program has not been able to run optimally.

The view on the banks of Ciliwung is in stark contrast to the city of Jakarta which continuously builds buildings and luxury shopping centers. Almost all Ciliwung’s intermediaries are stockpiled by massive garbage piles. River that should have a width of 50 meters, now only be as wide as 8 meters due to the garbage pile. It is not so surprising if this place is labeled as the most slum place in Indonesia.

The increasing number of slums in Jakarta has a great impact on sanitation and environmental hygiene. Not only that, the littering of garbage in slums is the main cause of flooding in Jakarta. Slum areas also cause an unflattering stance in the Indonesian capital Jakarta. In fact, Jakarta also has high skyscrapers and elite residential areas, but there is also a slum area. This is a picture of a real social gap in Jakarta.

Those are some facts of slums in Jakarta. Hopefully the government of Jakarta could have the best solution for the slums area in Jakarta. It is not good to put the bad side area in the capital city of Indonesia.

13 Causes Of Overpopulation In Indonesia