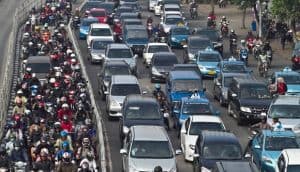 Traffic Jam is often found in major cities in developing countries such as Semarang and Jakarta. Frequently, congestion due to the increasing number of motor vehicles, the number of vehicles passing by on the road, both private vehicles and public transport.

No wonder the increasing number of road users who are increasingly day is not increasing, as happened in the capital city of Jakarta today. Most every citizen in Jakarta has more than one vehicle at their houses. Currently the government is still trying to reduce congestion that occurred in Jakarta. In fact, it is not as easy as imagined. Here are facts about traffic jam in Jakarta.

Jakarta was in the 7th position as most jammed city in the world by 2017. The congestion index in Jakarta stood at 279.89.  In 2016, the capital of Indonesia was ranked 17th in research on the world’s most jammed city. It is sharply raised if compared in 2016.

The most obvious losses appear to be fuel wastage. A lot of social costs are spent during traffic jams. Besides the cost of fuel before, it also adds the health costs resulting from air pollution. Currently, Jabodetabek area people who regularly travel in the area of DKI reach 2 million souls per day, with various interests.

With the high rate of loss, it should be better to build more infrastructure in Indonesia. Some even mention that the amount of loss is equivalent to the cost of building 14 Suramadu bridges connecting Surabaya and Madura.

A health study published through the international health journal Lancet shows that those who live near highways are more likely to suffer from dementia. That is a symptom of impaired brain function that can’t be cured. In particular, the study also proves that one in ten cases of dementia is caused by exposure to congestion.

Previous research has also revealed almost the same thing. The risk of dementia may depend on the distance of the settlement by road. Those living 50 meters from the highway have a 7 percent greater risk of dementia.

Every day Jakarta is struggling with traffic, one of which is the growth of vehicles that are not balanced with the road. In fact the number of vehicles increased by 8% per year, while the addition of roads is only 0.01% per year. This means about 7.3 million vehicles are fighting for 42.3km2 of roads in every day, 7.25 million or 98.8% of this amount is a private vehicle.

The average citizen of Jakarta spent 1 hour 8 minutes stuck in traffic every day. It’s the same time you can watch one episode of your favorite show every day. It is time wasting isn’t it? You must think many times if you want to live in Jakarta. But you can still get some benefits of living in Jakarta.

29 percent of car owners in Jakarta are now reconsidering whether they actually need to own a car or not. While in Asia, four out of 10 vehicle owners have considered stopping to drive their car over the past year. This figure is even higher among the younger generation, with 50 percent saying it is less interested in buying a car, according to the survey’s findings.

The study found that Jakarta people do not use their cars efficiently. During peak hours in Jakarta, there are 50 percent more cars than roads can accommodate and 50 percent of cars carry only one person. As a result the duration of the trip when the rush hour takes 1.8 times longer than usual hours.

Jakarta traffic jam continues to occur due to roads are not comparable with the growth of private vehicles. It can be justified that, the main stem of congestion in Jakarta due to increased growth of private vehicles. Will the addition of new roads be able to unravel congestion in Jakarta? Of course the answer will not solve the root of the problem, given the cost of land acquisition will not be a little besides the limited land.

The city of Jakarta has now become a hell for all its citizens. It is not only for motor vehicle users, but also sacrifices the convenience of pedestrians due to sidewalks are often crossed by motorcycles. Motorists in Jakarta have no choice. They often violate because they feel no signs or norms are violated. This condition is more common because of the lack of street sign information or more due to time constraint.