The Extreme Facts of Finger Cutting Tradition in Indonesia 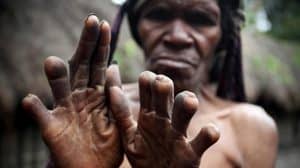 Dani is one of the many ethnic groups that exist or settle or inhabit the Central Highlands, Papua, Indonesia and inhabit the entire Jayawijaya regency and some Puncak Jaya regency. Dani’s population is approximately 25,000 inhabitants. Dani tribe is a group of tribes that inhabit the Baliem Valley region in the Central Highlands, Papua. Their settlement is between the Ersberg and Grasberg Hills that holds gold, silver and copper.

From the way they dress, they still wear a lot of ‘koteka’ (male genital cover) made of kunden / pumpkin and women wear wah clothes from grass / fiber and stay in “honai-honai” (hay-roofed hut / weeds). Major and religious ceremonies, tribal wars are still carried out (though not as great as before). However, there is one extreme tradition that they do. The tradition is to cut fingers as a form of grief after relatives died. It is called Iki Palek. To find out more about this horror ritual one, here are some extreme facts of finger cutting in Indonesia

Each place has its own ritual in showing the sense of loss when one family member leaves behind for good. There is a prayer and a thanksgiving, to do the extreme tradition that make goosebumps like that lived by the Dani tribe in Papua.

Once a close person dies, they will immediately decide on one of his finger joints. For most of people would likely think this ritual may be extreme. However, according to Dani tribe people, there is no better way to express a sense of loss than to do this dangerous ritual. The pain received for them symbolizes the heart and soul that is also torn from loss.

For the Papuan people, weeping for the families who have passed away will never be enough to symbolize sorrow. So that done finger cutting. It is because the finger is a symbol of harmony, unity, and strength in both human and family. Although in the naming of a finger in the hands of a human only mention one representative of the family that is the thumb.

However, if observed the existence of each form and length has a unity and strength of togetherness to alleviate the burden of all human work. Each other complement each other as a harmonization of life and life. If one is lost, then the components of togetherness and power will be lost.

However, if observed the existence of each form and length has a unity and strength of togetherness to alleviate the burden of all human work. Each other complement each other as a harmonization of life and life. If one is lost, then the components of togetherness and power will be lost.

Another reason why fingers are cut off when mourning is because the fingers have the basic guidelines of living together in one family, one family / clan, one honai (house), one tribe, one ancestor, one language, one history / origin, etc. or in His Papuan language “Wene opakima dapulik welaikarek mekehasik”.

Togetherness is very important for the people of the central mountains of Papua. Only wounds and blood were left. The pain is illustrated how deep their pain of losing someone. The injury of the person left behind the family member recovered only if the wound on the finger has healed and did not hurt anymore. Maybe that’s why the people of Dani tribe in Papua cut off the finger when there are families who died.

Initially you might think that this ritual is done by everyone. But practically, Iki Palek is only done by women only. Usually the person whose finger must be cut is the oldest mothers or women. So, when there is a close relative, maybe a husband, a child, or a sibling who died, then their finger will be cut off.

Probably because it’s only done by the oldest woman, then we can see that the majority of mothers there lose much of her knuckles. There are even up to only have three fingers are still complete. The finger cut off from Dani’s tribal mothers indicates how many of their families have died. Although he said only women do, but men sometimes also do it.

Talking about the procession, actually there is nothing too special in this Iki Palek ritual. As long as it can be broken then any way is legitimate done. Usually the people there use a kind of ax or traditional knife.

The tradition of cutting fingers in Papua is done in various ways there are using sharp objects such as knives, axes or machetes. Another way is to tie a finger with a piece of string for some time until causing blood flow to stop and when the blood flow stopped freshly done finger cutting.

Not just wearing tools, sometimes even some who wear alias teeth bitten to break up. About the pain, do not ask because they clearly feel it. But, again, this is a sign of loyalty to be done. And they do not feel heavy because of it.

Not only women who do extreme tradition as a symbol of loss, the men of Dani tribe also did it. It’s just that they have a slightly different way. Not a finger cut, but sliced the skin of the ear. The process is not much different, so when there is a brother who died then the men will cut the skin of his ears. Usually they do this by using a kind of sharp bamboo blade.

Not only stopped here, to complement the grieving momentum, there is also a mud bath ritual. The tradition is a mud bath tradition. Mud baths are performed by groups or members for a period of time. The mud bath has the connotation that everyone who has passed away has returned. Man starts from the ground and returns to the ground.

Those are the facts of finger cutting that exist in Dani tribe. Although it is extreme, it is one of the part Indonesian cultures. Fortunately, this tradition starts left by the people of Dani.

The Unique Tradition of Balinese Funerals in Indonesia