A traditional dance is often used as an expression of culture by a particular group of people. It may symbolise the many things that the group has to face in their daily life. The traditional dance may also hold a valuable cultural element that must be celebrated.

Papua is a province in Indonesia that is abundant in natural resources but also have a strong connection with their culture. Every tribe in the region has their own kind of traditional dance. Each dance has their own purpose.

The traditional dance in Papua Indonesia is unique and you won’t be able to witness it in any other place. The following are some of the traditional dances that the people perform, either for festivals, tourism or art performance. 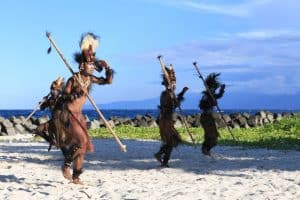 The Wutukala traditional dance originated from West Papua. It depicts the every day life of the Moy tribe who are living in the region. The dance also displays a depiction of their source of livelihood which is hunting for fish. Most of the Moy tribe are fishermen. This dance shows the gratefulness of the people for what they have received in their life.

The Wutukala traditional dance is done by both men and women. There are usually 5 up to 6 pairs of them. They wear their traditional costume during the dance. For the men, they wear skirts that are made using dry leaves and roots. On their heads, there is a headpiece consisting of the beautiful Bird of Paradise feathers. Their bodies are also covered in various black and white paint. Moreover, they also hold spears that are used to catch fish. The women do wear similar costume as well. But, They carry a bag that is used to contain fish.

Every movement in this dance carry a story. The men move in a way that is similar to how they would often get their fish. The women dance as if they receive the fish from the men.

Of course, there is music too. The music accompanies the dance. Guitar, ukulele and bass are some of the instruments they use. With that, the people also sing a traditional song expressing their happiness about the life that they have in Papua. 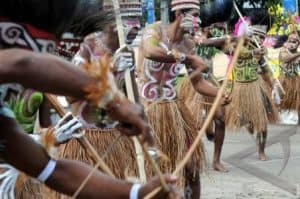 This particular traditional dance is often carried out by one of the most well known tribes in Papua which is the Asmat tribe. The dance holds a very strong symbolism of the people in Papua.

It used to be the dance that they do when the chief declares that it’s time for war. People will be so fired up for the war when they do this dance. But in the absence of war, the dance now depicts how brave the people truly are.

The war traditional dance consists of around 16 males and 2 females. They wear traditional costumes such as chestnut beads, dried grass skirts, different kinds of headpieces and paints on their faces. They carry their long and sharp spears. Some may even have bows and arrows that were used in wars. The dance is very lively as drums are beaten to guide their move. 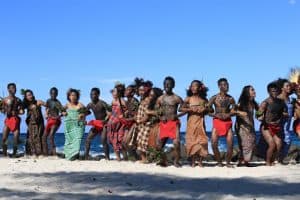 The Arfak tribe in Papua made this traditional dance. The Magasa traditional dance is also called as the Snake dance because of how the dancers’ arms are linked to each other. In the olden days, the Magasa dance is performed when the tribe achieve victories or done great accomplishments. Now, the tribe dance as a celebratory gesture for guests who come to Papua. For the Arfak tribe, the dance is also a gesture for gratitude.

For the Magasa dance, the men would wear a piece of cloth around their west. They would also wear feathers of the Bird of Paradise or Cassowary bird. In their hands, there would be a traditional gear or weapon of their choice such as a sword or a spear. On the other hand, the women would war a sarong that covers their chest down to their feet. Their heads would be covered with flowers or the leaves from the Sago tree.

Anybody can perform the dance. There is no limit to how many people can participate. But the usual setting is alternating the man and the woman. Then they would link their elbows with one another.

There are no musical instruments for this dance. The dancers would sing a traditional song together. They will move in unity while happily chanting a song they know so well. 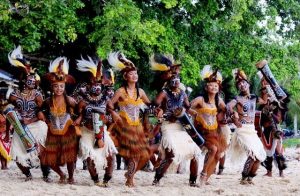 The Welcome traditional dance has been performed by the tribes in Papua for many years. The dance shows how welcoming they are to the guests who come to Papua. It’s a symbol of gratitude and respect to the guests. When the dance is performed for them, the people in Papua hope that they feel at home. It also ensures the guests that they will be treated very well by the people there.

A group of men and women perform this dance in front of the guests. They will wear their traditional costume, headpiece, necklace, bracelet and other necessary accessories. The group will dance along to the sound of the live music that accompanies them. The people often play the guitar, the ukelele and the traditional tifa to make the dance more lively. The tifa is a special musical instrument in Papua. It is similar to a drum but the men carry it while they dance.

There are a couple of sessions for the dance. So the group have various moves that they must show to the guests. The dance is very energetic and upbeat. It gives a very positive atmosphere for everyone who watch it. Guests are sometimes given a necklace and a headpiece to make them that they also belong in Papua. They are then asked to dance along with the group. 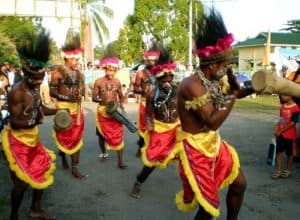 The Suanggi traditional dance has a very strong bond with the beliefs of the Western Papua tribes. It tells the story of a man who is now alone because his wife died for being a Suanggi woman. Suanggi itself means an evil spirit that still roams the earth for revenge. They still have some unfinished business and because of that, their soul cannot rest peacefully. It is said that a Suanggi comes from a woman who passed away after giving birth.

The Suanggi often possesses the body of a woman who is still alive in the tribe. When a woman is possessed, she is now called as the Suanggi woman and she also has some black magic power. This power will be used by the Suanggi inside the woman to cause hurt and chaos. They will attack the people that they don’t like, especially the ones who harm the environment. Their power is dangerous and may cause death.

The elders in the tribe will find out who the woman is and get everyone to kill her. Once she is dead, they will open her up and find evidence. There might be some odd things that reside in her body. For the tribe, they believe that a Suanggi woman will have two biles instead of one. It’s a sure sign of a Suanggi spirit.

The tribes in Papua believe that it’s important to never forget these traditional dances. They tell the world of their story and their beliefs. To abandon them would mean that they will lose their identity.

30 Facts of Bali Indonesia That Are Really Unique