The Unique Tradition of Balinese Funerals in Indonesia

Bali is a very famous cultural tourism destination to foreign countries. No wonder, if the longer Bali the more foreign visitors. They come to Bali not just enjoy the beauty of nature. Some of them claim to be curious about the cultural diversity in Bali. One of the things that interest them is the tradition in Bali.

In Bali, tradition is a duty that should not be missed when having a big events in their lives, such as: marriage, birth, even death. The most unique is their tradition in performing a burial ceremony. There are two unique traditions of  of Balinese Funerals in Indonesia. Here is the review.

In Balinese Hindu custom, if there are relatives who died then usually done cremation or bury the corpse in accordance with taught by Hinduism. In Trunyan village, the corpse was not buried or cremated as is common in other areas, Trunyan Village residents keep the remains of their dead relatives on the ground, covered with cloth and bamboo arranged to form a prism. The people of Trunyan village named their funeral ceremony as Mepasah. 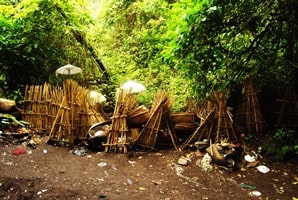 In Mepasah tradition, after the cleaning ceremony by means of bathing with rain water, the corpse is only laid on the ground. The casing of the corpse was given a hole of about 10 to 20 cm so that the mortal position did not shift due to the contour of the burial ground is uneven.

Then other than the face, body parts wrapped in a white cloth. As a marker, the corpse is covered with bamboo arranged to form a prism called ancak saji. What is unique is that even though the corpse was placed on the ground, the corpse did not smell. The corpse is placed between the tree Taru Menyan, taru means tree and the meaning is fragrant. Presumably, the aroma that comes out from the taru menyan tree is believed can neutralize the air around it.

2. How the corps couldn’t be decomposed?

Trees that emit such strong unique scent can only grow in this area, although it has been tried to be planted in other areas. The uniqueness of this tree seems to have become the forerunner of Trunyan village name.

Under one taru tree, there is only a maximum of eleven bodies can be laid. It is governed by the indigenous beliefs. But some say that one tree can only neutralize eleven bodies, so if more than that then the body will emit odors. If there is a new corpse, then one of the longest remains will be moved, to the open, not covered with brackets of the ancestors again but united with other bodies in the stone or under the tree.

So do not be surprised if in the place, there are bones and supplies goods offerings such as sandals, spoons, plates, clothing, and others scattered in the cemetery. It is intentional because there should be no goods that are taken out of this burial area.

But not all bodies can be treated the same as the ones mentioned. Only under certain conditions can the corpse be buried like this. Terms of the mortal that can be buried in such a way are those who at the time of death including those who have married, the people who are still single and young children whose teeth have milk date, the people who died in a natural condition and no injuries which has not healed, and has a complete body part. If it does not meet these requirements, then the body is buried by buried.

3. The Kind of Grave yard in Trunyan

Adat Village Trunyan has arranged funeral procedures for its people. There are three types of sema (tombs) located in Trunyan Village and have been distinguished by the age of the deceased, the wholeness of the body parts, and the way of burial.

The first burial area is called the sema wayah, where the burial is considered the best and most sacred. That is when the corpse can be buried by way of mepasah. The second type of burial is the sema muda, where the body is buried, reserved for children or babies whose teeth have not yet been dated.

The third type is sema bantas, as well as the young sema corpse buried buried, but is reserved for people who Ulah Pati and Salah Pati, which at the time of death still leave the wound and cause of death is not fair like accident, loss of life caused by action owang others, loss of life by deliberate, and there are parts of the body that are not intact.

Ngaben in Bali  is a cremation ceremony or burning corpse in Bali, Indonesia. Ngaben traditional ceremony is a ritual performed to send the corpse to the next life. In this ceremony, the corpse is placed in a position like a sleeping person. For the detail information, continue to see this review.

The abandoned family will assume that the deceased person is asleep. In this ceremony, there is no tear because they assume that the corpse just does not exist for a while and undergoes reincarnation or will find the final resting in Moksha that is a state where the soul has been free from reincarnation and wheel of death. Ngaben ceremony is also a symbol to purify the spirit of the deceased.

If a person dies, the dead are in fact only the corpse while the spirit is not. Therefore, to purify the spirit, it is necessary to perform the Ngaben ceremony to separate the spirits with their crude bodies.

About the origin of the word Ngaben itself there are several opinions. Some say that Ngaben comes from the word beya which means stock. Some argue from the word ngabu which means to ashes. In addition, there is also a saying that Ngaben comes from the word Ngaben means sanctification with fire. In the Hindu belief, the god Brahwa or the God of creator is known as the god of fire. Therefore, this ceremony can also be considered as an attempt to burn the dirt in the form of a rough body that is still attached to the spirit and return the spirit to the Creator. 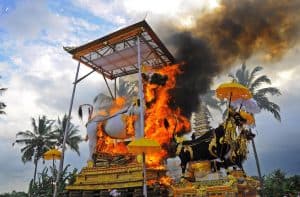 For the people in Bali, Ngaben is a happy moment because by carrying out this ceremony, parents or children have performed obligations as family members. Therefore, this ceremony is always greeted with joy without sobs. They believe that sob just precludes the journey of the spirit reaching nirvana. The appropriate day to perform the Ngaben ceremony is usually discussed with the elders or the people of the understanding. The body will be placed in a crate.

It is placed in an ox-shaped sarcophagus or placed in a vihara-shaped container. This container is made of paper and wood. This form of monastery or cow is brought to the cremation site through a procession. The procession does not run on a straight path because it aims to keep the evil spirit from the corpse.

The peak of Ngaben traditional ceremony is the procession of burning the whole structure of yaknik Lembu or this monastery along with the corpse. Ngaben procession usually takes a long time. For those who still have a high caste, this ritual can be done for 3 days. However, for low-caste families, the corpse should be buried first and then done Ngaben.

Those are the unique tradition in Bali. Both of them might be weird for some people. However, it is a tradition that becomes one of cultures in Indonesia. So, it should be well preserved.

The Extreme Facts of Finger Cutting Tradition in Indonesia