Indonesia is known for having a lot of tribes. All of them have their uniqueness and speciality, making it different from other tribes. Also its worth taking a look at them, at least once. That’s why we take you to another tribe that exist in Indonesia, called Asmat Tribe. (See also: Misunderstanding of Culture in Indonesia – Papua Culture)

So what is the culture of Asmat Tribe, check them below : 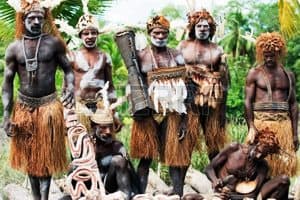 Before knowing about its culture, we better understand what is Asmat Tribe first. Asmat is a tribe in Papua. Asmat tribe known for its unique wood carving. The Asmat population is divided into those who live on the coast and those who live in the interior. These two populations have their own characteristics and charms from one another in terms of dialect, way of life, social structure and ritual.

The coastal population is further divided into two parts: the Bisman tribe which is between the Sinesty River and the Nin River, as well as the Simai tribe. (See also: Culture of Toraja – Indonesian Theater )

The Asmat tribe is the name of the largest and most famous tribe among the many tribes in Papua, Irian Jaya, Indonesia. One of the things that make the Asmat tribe known enough is the result of a very distinctive traditional wood carving. Some ornaments / motifs that are often used and become the main theme in the sculpting process conducted by the tribe asmat people is taking the theme of the ancestors of their tribe, commonly called mbis. (See also: Indonesian Angklung Facts – Indonesian Beliefs and Values)

But not stop there, often also found other ornaments / motifs that resemble a boat or wuramon, which they believe as a symbol of a boat that brings their ancestors to the realm of death. For indigenous tribes asmat, woodcarving is more a manifestation of their way of performing rituals in the remembrance of the spirits of their ancestors. (See also : Kecak Dance In Bali – Barong Dance in Bali)

Asmat tribe is a tribe that embraces Animism, up to the introduction of the missionaries bringing new teachings, then they start to know other religions than the religion of the ancestors. And now, these tribal people have embraced various religions, such as Protestantism, Catholicism and even Islam. Like society in general, npw they are carrying out its life process, Asmat Community also, go through various process, that is:

During this process takes place, the next generation will be well preserved to be born safely with the help of the biological mother or mother-in-law. Birth, shortly after the baby was born performed a simple ceremony with a cutting ceremony umbilical cord that uses Sembilu, a tool made of bamboo is dilanjarkan. Furthermore, breastfed until the age of 2 years or 3 years. (You might want to see : Balinese Wedding Traditions)

Next is Wedding, this process applies to a 17-year-old male and female and is done by a male parent after both parties reach an agreement and through a test of courage to buy a woman with a dowry-based antique dish based on the value of the Johnson boat vessel agreement , If there is a deficiency in the Johnson boat price interpretation, then the men must pay it off and during the repayment period the man is prohibited from taking acts of persecution even though it is allowed to live in one roof. (Read also : Flag of Indonesia – Indonesia Military Power).

And the final is Death, if the tribal chief or customary chief dies, the remains are mummified and displayed in front of this tribe’s joglo, but if the general person died, the body is buried. This process is carried out with the accompaniment of the Asmat-language song and the cutting of the fingers of an abandoned family member. (See also: Natural Disaster in Indonesia) 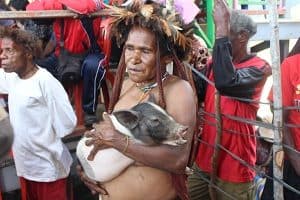 There are several unique things found in this tribe. Many of them aren’t logical and unreasonable. For example, of course we all know “intercourse”, the activity that man and wife doing to producing next generation of their family. Normally, they do it on the bed, right? However, this thing in Asmat tribe is quite “wild”. In fulfilling their biological need, both men and women do it in fields or gardens, when men come home from hunting and women are working in the fields. (see also: Longest River in Indonesia)

Also there is another unique “event” here. This thing is between women and pig. Not intercourse of course, but this is about breastfeeding. And it happens where piglets are breastfed by this tribe woman until it reaches 5 years old.  (See also: Traditions in Bali)

The Asmat community is Catholic, Protestant, and Animism, a doctrine and practice of natural balance and worship of the spirit of the dead or sculpture. For Asmat tribe sago worms are an important part of their ritual. Each of these rituals is held, ascertained, if many caterpillars are used. The customs of the Asmat tribe recognize itself as a god child from a mystical world which location is where the sun sank every evening. They are convinced that their ancestors used to land on earth in the mountains. Beside, the Asmat people also believe that in their territory there are three kinds of spirits that each have good nature, evil and evil but dead. Based on the mythology of the Asmat people dwelling in the Gulf of Flamingo, the god was named Fumuripitis. (See also: Ngaben in Bali)

Asmat tribe believe that they are descendants of the gods who descend from the unseen world which is beyond the sea behind the horizon, where the sun sets each day. According to the beliefs of the Asmat, the god of the ancestors landed on earth somewhere far away in the mountains.  On his way on downstream until he arrives at a place that is now inhabited by Asmat people lived in downstream, he experiences many adventures. In the mythology of Asmat people who dwell in the Gulf of Flaminggo for example, the god was called Fumeripitsy. As he walked from headwaters to the sea, he was attacked by a giant crocodile. (See also: Balinese Puppets)

The boat he had, drowned. In the fierce fighting that occurred, he could kill the crocodile, but he was seriously injured. He was carried away by the flow that stranded him on the banks of the Asewetsy River, the present is Syuru village. Luckily, there was a Flamingo bird who looked after him until he recovered; Then, he built a yew house and carved two very beautiful statues and made an em drum, which was very strong. After he finished, he began to dance continuously without stopping, and the magical power that came out of his movement gave life to the two statues he carved. Soon the statues began to move and dance, and they later became the first human couple, the ancestors of the Asmat. 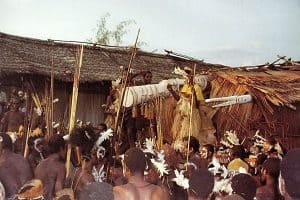 The Asmat do not know the terms of burying the bodies of the dead. For them, death is not a natural thing. If a person is not killed, then they believe that the person died because of a black magic that hit him. Newborns who later die are considered common and they are less sad because they believe that the spirit of the baby wants to go to the realms of the spirits. On the contrary, the death of an adult brings deep grief to the Asmat community. (See also: Bali Tribes )

The Asmat believe the deaths which come except at too old or too young, are caused by evil actions, whether of magical powers or acts of violence. Their beliefs require revenge for the dead. The ancestral spirits, to whom they devote, are represented in spectacular wooden carvings in canoes, shields or wooden poles carved by human figures. (See also: Hinduism in Bali )

Until the late 20th century, Asmat’s youths fulfilled their duties and devotion to their fellow members, to their ancestors and at the same time proved their virility by bringing their enemy’s head while his body was offered to eat by other family members in the village.

There are some traditions which still done by Asmat people until now. They believe that kind of tradition will make their life better than before, as follows:

1. The Making of Lesung Boat Ritual 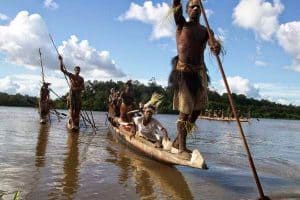 Every 5 years, Asmat people make new boats. In the process of making boat to finish, there are things to note. After the tree is selected, cut down, peeled and tapered at both ends, the rod is ready to be transported to the boat making. Meanwhile, the handles for holding straps and ropes are prepared. The abstinence to watch while working on it all is not to make a lot of the sounds around the wrought. The Asmat people believe that if the log is stepped before it is pulled into the water, it will gain weight so it can not be moved.

To pull the log, the boat owner asked for help from his relatives. A small part will drive the wood in the back and the rest pull the wood. Previously held a special ceremony led by an influential elder in the community. The point is that the boat will run well and smoothly. 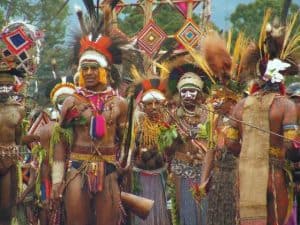 Bis ceremony is one of the important events in the life of the Asmat tribe because it is related to carving the statue of the ancestors (bis) when there is demand in a family. In the past, this bis ceremony was held to commemorate the family members who had been killed, and the death must be avenged by killing family members of the killing party.

To make a statue of ancestor or brother who has died required approximately 6-8 weeks. The carving of the statue is done inside the long house (bujang) and during the making of the statue takes place, the women are not allowed to enter the house. In the making of bis statues, there is usually a wife exchange called papis. This action intends to cultivate an indispensable friendship relationship at a certain moment, such as warfare. The choice of spouse occurs during the ceremony of war between women and men held every afternoon.

3. The Making of Bujang House 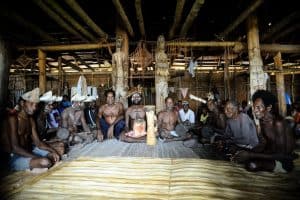 A family can live there, but if there is a planned raid or ceremonies, women and children are barred from entering. The Asmat perform special ceremonies for the new bujang house, which is attended by family and relatives. The making of a bujang house is also followed by several people and the ceremony is performed with dance and tifa.

That’s it the Culture Asmat Tribe. So what do you think about it? We must agree that Asmat has a rather unique custom that can’t be found anywhere else. And its a good point, to add the uniqueness of Indonesia itself. Thanks to that, Indonesia becomes more “special” in our heart. That’s it, have a good day!