13 Foods eaten in Bali You Should Try

Balinese dishes are no less famous than its tourist attractions. In fact, many restaurants in other cities provide dishes from the Island of the Gods. For those who already tasted it, they will surely know its dishes.

Bali is indeed a tourist destination that is often visited by tourists, both from inside and outside the country. Naturally, because the city offers variety of pleasant vacation spots. But do not waste your opportunity to try the signature dishes in Bali. Because foods from Bali is very typical. It’s very different from dishes from Java, Kalimantan or even western dishes. They use very typical spices to make food delicious. Here are 13 dishes you can eat in Bali, Indonesia. 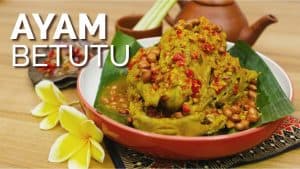 This dish is in the form of chicken or whole duck whose stomach is filled with various spices. That said, duck Betutu is a favorite food of kings in Bali. The processing technique is quite unique, namely the seasoned duck meat will be given massage first so that it is more tender and the marinade seeps into the bone. After that, wrapped in banana leaves or areca leaves and baked.

The ripening process takes a day and night using the coals of chaff. The taste that is presented, namely savory and spicy. Usually, food is served at religious ceremonies. But, now a mandatory menu in fancy restaurants. Some restaurants that provide it are Ayam Betutu Liku, Ayam Betutu Men Tempeh and Ayam Betutu Typical Gilimanuk. 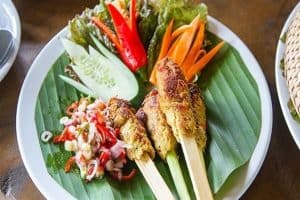 As the name implies, processed satay is made by wrapping the main ingredients on the stem of lemongrass or bamboo stalks. So, it produces a pleasant aroma. Some types of meat that are often used are chicken, beef, pork and mackerel fish. But, until now the last choice is still a favorite, even though the price is expensive. The meat is chopped and mixed with Balinese spices before being wrapped around.

It is not difficult to find satay lilit because almost all restaurants serve this menu.

Lawar is a blend of minced meat with various vegetables spiced with selected spices. Generally, these foods are made from pork, but kuwir (duck entog) can be an alternative for Muslims. So, the chopped meat will be mixed with vegetables, such as long beans and grated coconut with herbs. More delicious when eaten with white rice, satay lilit and jukut ares.

Please note, lawar itself varies. When viewed from the color, there is a red lawar and white lawar. The first special is usually produced from a mixture of blood meat. There are also lawar which are named according to the type of meat or vegetables, such as kuwir lawar, pork lawar and jackfruit lawar. Warung Lawar Kuwir Bu Wit in Tabanan and Warung Makan Pan Sinar in Denpasar is a recommendation for a restaurant that serves kuwir lawar. 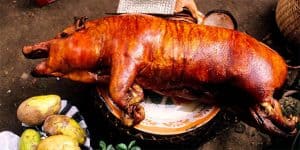 This food is excellent for foreign tourists who come to the Island of the Gods. For pork lovers, they will certainly be satisfied by the delicious food. Using Balinese genitals and cassava leaves which are put into the pork belly before being rolled while rotating on the coals of fire makes it taste delicious. Moreover, the brownish skin color is very crunchy on the tongue. But, not everyone can consume it because pork rolls are not halal food.

Like a duck, initially another food called guling is served as a traditional ceremony. However, now there are various restaurants. The restaurant that offers these cuisines, namely Warung Jero Kawan in Mengwi, Pak Dobiel’s Warung Babi Guling in Nusa Dua, Warung Babi Guling Candra in Denpasar and many more.

In Balinese, “tipat” means ketupat and “cantok” means to be rolled or mashed. Of course the main ingredient of the dish is ketupat which is given long bean vegetables, kale, bean sprouts and cucumber. The process of serving is similar to rujak petis. So, spices such as fried peanuts, garlic, chili, salt and taoco are mashed with mortar. After that, the ketupat and tofu are cut into plates. Then add cooked vegetables and poured peanut sauce.

Tipat Cantok is quite famous in Bali, so it is not difficult to find a seller. You can try the culinary style of a simple warung or star hotel.

If you usually eat vinegar flavored rujak, in Bali it is different because there are processed rujak with tuna fish sauce. This food called Rujak Pindang is made from sliced young mango and super spicy sauce. But, if you want to be more complete you can add filling with various kinds of fruit, such as bengkuang, kedondong or seaweed (bulung salad). Usually, the type of seaweed used is bulung boni. 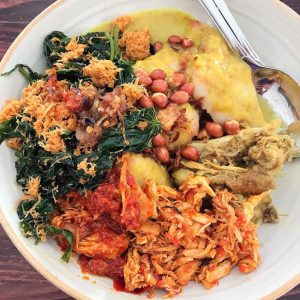 Culinary originating from Buleleng Regency is in the form of diamonds, but the shape is not square, but rather like lontong and wrapped extensively with young coconut leaves or young palm leaves. Unlike the ordinary ketupat using peanut sauce, Tipat Blayag is quite unique because it mixes seasonings from processed Balinese rice and spices flour. So, the texture is thick and slightly similar to coconut milk. 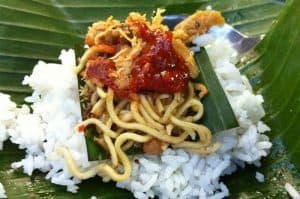 The next typical Balinese food is Jinggo rice. This culinary concept carries a cheap concept, but the matter of taste does not dare to match. Same with cat rice, the food is wrapped in banana leaves. The contents are one pan of white rice, shredded chicken meat, fried tempeh, fried noodles and extra spicy sauce. Usually, people will not be full if they only eat one packet of rice jinggo. Speaking of its name, there is a unique history related to the price of this food.

So, no one knows for sure what the terms “Jinggo” or “Jenggo” mean. But, according to some people it comes from Hokkien, which means one thousand five hundred. In 1997, when the new popular Jinggo rice was indeed priced at Rp1,500. However, it is now sold at a price range of IDR 3,000-5,000. Because it is classified as street food in Bali, you can find these food vendors on the roadside.

This dish originating from Gianyar in the form of rice made soft, even the texture is like porridge. But, what distinguishes it is the hot spices from the edge. In general, these preparations are served with various ingredients, such as long beans, Moringa leaves, young jackfruit, eggplant, red beans and grated coconut. For the side dish itself there are shredded fried chicken and eggs. It feels more special because it is presented on a banana leaf.

Tepeng rice is available in several places, especially Senggol Market, Gianyar and is a favorite breakfast menu for the people there.

This food is very famous in rural areas. But, now it’s not only villagers who like food other than sweet potato rice, urban residents also love it. Because, the taste of interrupted rice is truly special. As the name implies, the main recipe for the dish is rice and sela (sweet potato). Seasoned with kalas, which is a mixture of coconut milk, meat and big base. Additional ingredients are jukut (vegetables) bejek, small shrimp, peanuts, shredded chicken, bongkot sambal and sambal mat that make addiction

Although it sounds ordinary, but the rice rice from Karangasem has a quite interesting history. So, this food appeared for the first time in the 1970s when the region experienced economic difficulties. Local residents mix cassava and sweet potato as a substitute for rice in the midst of a crisis.

Komoh is a type of soup that contains meat, such as chicken, duck, egg, turtle or pig. Sometimes, this food can also be served with the liver and skin of the animal. The way to eat is quite unique, namely “dipuyup” alias bring the serving bowl closer to the mouth by hand, then comoh can be drunk or it could be with a tablespoon.

Other than lontong in general, fragile jukut has different shapes and sizes. There are triangles, but some are oval and larger in size. Usually, the main ingredients are cut into pieces, then served with various cooked vegetables, such as cassava leaves, spinach, papaya, jack fruit and fruit or the heart of a banana. After that, it was doused with a thick sauce called telengis. Made from the side of coconut oil and boiled coconut milk.

Those are 13 foods locals ate in Bali that you should try. You may find recipes in the internet and cook it yourself but it will taste original if you eat it directly in Bali. Happy eating!

12 Surprising Facts of Cigarette in Indonesia

Best Surfing in Indonesia : Our Recommendations