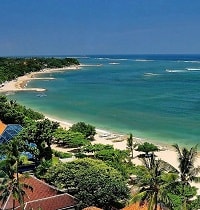 Indonesia has a lot of beautiful tourism objects to visit. One of them is Bali which is known as the island of the Gods. A lot of foreigners recognize Bali as a beautiful island without knowing Bali is the part of indonesia. Bali becomes well known because its beautiful beaches. The most popular beach is Kuta.

Kuta is located in southern of Bali. Both local and foreign tourists will never skip visiting Kuta Beach when they go to Bali. The exotics scenery of Kuta with the white sand and blue sea could mesmerize a lot of tourists. Kuta is also famous as the heaven of the surfer because of its good wave. Moreover, Kuta has a beautiful spot where people could see the great sunset. It would make the perfection that Kuta is the most popular beach in Bali.

Kuta beach didn’t instantly become as popular as today. It has a long journey and story for Kuta to develop into a very busy place. It would be something new for some people if they would like to learn history of Kuta Bali.

Kuta has been found since 14 century, in 1336. Patih Gajah Mada and the troops from Majapahit landed in Kuta, Bali. It was aimed to do an aggression for a mission. Then Patih Gajah Mada and his troops could successfully did their mission to conquer Bali. Because Kuta was fit to be a port area, this place became the small port as the important centre of trade port. Local people called this place Pantai Perahu.

Long time ago, Kuta was not so crowded place. It was just a small village. In 1597, it was Aernoudt Lintgens who arrived as the Dutch sailor and felt so stunned on Kuta. He stayed for a week to record his experience in Kuta and wrote it into a journal named “The Last Paradise”. Surprisingly, it could promote Bali into abroad successfully.

Another version also said Mads Johansen Lange, the Dane people who was a trader, landed in Bali through Tukad Mati river (dead river). It was happen in Dutch colonialism era. His good skill on trading brought his name into successful trader in Kuta. He was good in adaptation so the people in Kuta could accept him easily. He became the mediator between Balinese Kings and abroad trader. Kesiman King gave him a belief to export commercial spice. Unfortunately, he died mysteriously and was buried near Tukad Mati River.

Mads Lange’s name then to be immortalized as one of the street name in Kuta, Bali. There was also built a monument at Chinese grave yard complex in Bali. There is written “Sacred to the Memory of Mads Johansen Lange” to commemorate him.

Then, Manx whose kid name was Murial Stuart Walker, a Scottish American came to Kuta in 1932. Her coming to Indonesia was actually because of her depression to herself. She began falling in love with Kuta after watching a Balinese film, “The Last Paradise” in Hollywood Boulevard.

When she arrived in front of King palace in Bali, many people welcomed her as if she was the princess of Bali. Then the king of Bali gave her a Balinese name, K’tut Tantri. It was the sign of how she admired Kuta.

She built the first hotel in Kuta named Suara Samudra. She also became the author of “Revolusi di Nusa Damai” which contained her important role in history of Kuta Bali.

Kuta became more popular after Hugh Mabell launched the book titled “Pujian untuk Kuta”. The book wrote some enticements for people to make a tourism facility in Kuta as the tourism object. Because of this book, people started to develop Kuta for tourism place. They built some resorts, hotel, restaurant, and many others. After for a long term, Kuta officially became the center of tourism object in Bali.

Old Kuta beach was the place of landing for thousands turtle. Because a lot of people start to visit Kuta and build so many buildings there, their habitation is rapidly decrease. Kuta today makes a lot of change. On the bank of the beach grows many coconut trees, pandanus trees, “padangglak”, and “katang-katang”. All of them has the same function to keep the sand resistant.

Thus, by knowing the history of Kuta Bali, we should keep environment in Kuta Bali balance. We have to remember that Old Kuta maybe dozens times more beautiful than Kuta today.