Hello again everyone. Meeting you again in this beautiful morning with thousand of facts of Indonesia. Now, beside having fun at the great venues at Bali island, you can do another religious journey to some places in the island.

Call it, the temples and other else. There are so many temples in Bali, because they are very religious people. They do their prayer almost everyday. And they do it, at the nearest temple in their area. Now, we’re gonna tell you some of the places included in the list of 17 spiritual places in Bali. 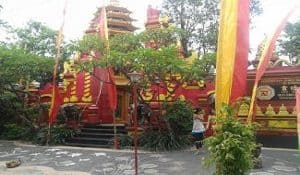 The first one we’re gonna take a look at is this chinese temple in Tanah Kilap called Ling Li Mao. Just like the other chinese buildings in Indonesia, it has this specific architecture of China in some of its spot. Juts like in the pillars and the roof, you can find the chinese elements in there.

Beside for praying, the place is also used as a gathering places for people. They need to gather and talk about their things, you know their daily life or something social. There you can also just hanging around and enjoying its view. 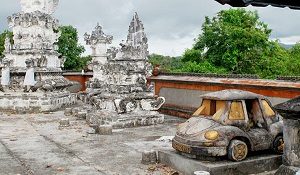 The next is Paluang Temple in Nusa Penida Bali. Well this is the famous one, thanks to its car-shaped pelinggih which attract some people in the region and also other countries. Many foreign tourists come by just to satisfy their curiosity about this pelinggih.

The location also great for taking a picture or else. Its located near the sea where you can see the sunset if you want. Then, don’t forget to bring your camera and capture all the moments in there! Have fun! 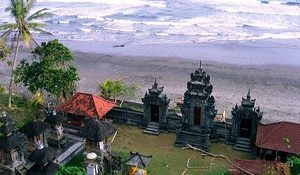 This is the big one. Rambut Siwi Temple is the biggest and the highest temple in Bali, passing Penataran dan Segara Temple. It’s so big that you may confuse it as a fort or something. Just to reach its gate, you need to go through many steps.

It can be tiring actually to walk around in this temple. However, when you  finally done, it that’ll be very satisfying. The view there is so great to be capture. Then, if you really curious about it you can go to Gilimanuk, Denpasar to visit it by yourself. 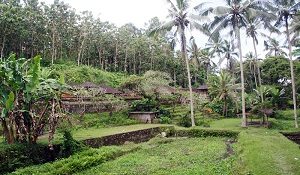 Next one is Ulun Mumbul. The place is located in the middle of this calm park named Ulun Mumbul park. The park itself is so peaceful and fortunately still green with those trees and bushes. In the middle of the park there’s this clear water pond that exists on its center. Then on the pond, Ulun Mumbul stands.

You can either check the temple or the park first and then continuing your journey to the next spot. The place’s considered sacred though, people uses it for ceremonial places. Therefore, maybe you’ll need a permission to enter the temple. 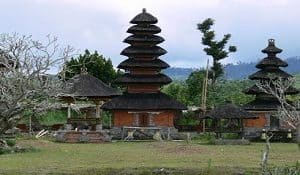 For example the Tionghoa temple of Balingkang, Paruman Agung, and Ratu Ayu Subandar pelinggih. So you can feel this strong acculturation between those cultures. It’s really beautiful to see. 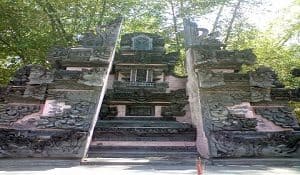 If you imagining the city called Makkah in Saudi, then you’re wrong. A little bit wrong actually. Even though the temple ain’t located in Makkah city, but you can feel the Islam elements in it. The places is used for Muslims to pray, not other religions.

The construction of the building looks like a mosque but in the shape of a temple located in this specific location at Buleleng. So maybe they named it Mekah after the symbolic city of Islam, Makkah city. The purpose is to show their identity as Muslims. Therefore, if you’re a moslem, you can try to pray for a while in here. It’s good. 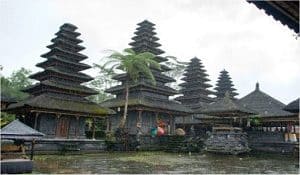 The Catur Lokapala will tell us about the story and the definition of Hinduism religion in this epic tale. Now, the temple is said as the one to protect the calm and peacefulness of the four realms. Each realm protected by one God. That’s why, there are four Gods who protect the realms.

Just like the story above, the place is very quiet and peace. This calmly atmosphere added with the existence of the lake near temple. Making this place more comfortable to visit. You can check it in Besakih village, Karangasem. 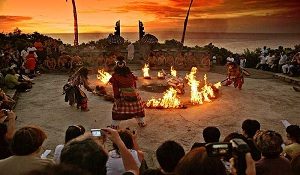 Next is Uluwatu Temple. Some of you may know about this special temple. Because, other than place for prayer, Uluwatu Temple is also used as a place for another interesting show called Kecak Dance in Bali. They held it here often.

Then if you haven’t known it, then you may as well visit it immediately. Thus, the seats here are mostly filled by foreign tourists. The seats are pretty limited. Therefore if you want, just check it out at Uluwatu regency, Bali. 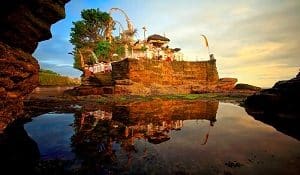 This temple is very famous in tourists eyes, thanks to the Tanah Lot area that very familiar to anyone. Tanah Lot is actually a shopping area where you can buy things for you or your friends and family back home. But, there’s one thing to explore.

The temple. Yep, the exclusive Tanah Lot temple ain’t the one you’re gonna see everyday, because the way to temple is not available on anytime. You can cross to the temple when the water is at very low level. That’s why when the tides come you can’t do anything but watch it from afar. It’s one of the great place you should go to. Meanwhile, if you want to know more information about tanah lot, you can check History of Tanah Lot Temple and the Legend. 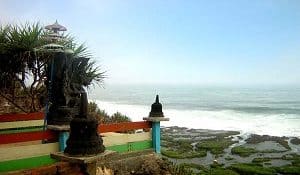 This spectacular temple is located in the most “exclusive” area of Tabanan, Bali. Located in the beach lips, accompanied by the Soka trees. The way you have to go is a little bit challenging. However, once you arrived, you’ll be blown  away by the spectacular view it has.

The things is, the temple is considered as a very sacred place to visit. Tha’s why you must respect some rules there, and have to get the permission to go visit it. You can’t go there by yourself because it might be dangerous for you. 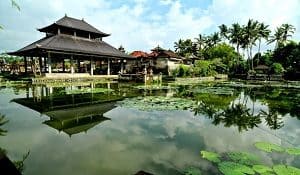 Langgar means small mosque in Javanese, so that’s why the temple looks like a mosque but with a very tiny size. Not that tiny actually. Some called it as Dalem Jawa Temple, because the name Langgar is very common in Java.

The temple located in Bangli, Bali in the middle of this lotus filled pond. The view is great so the building. Even some of moslem come here, but not for praying but to do another activity like Qurban for example. They do it just one day before Nyepi happens. 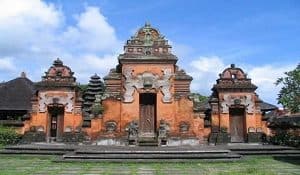 Taman Sari temple is also one of the famous temples in Bali. The place is very rich of history, that’s why many students came here to search and examine the histories that left in this place. The histories are rather important one because it has the relation with the great ancient kingdom of Majapahit.

Well even though most of the heritages or historical objects were brought by Deutsche in colonial era, but some of them remain in here. They’re maintained beautifully. So, if you want to explore the history, the Taman Sari will always welcome you. 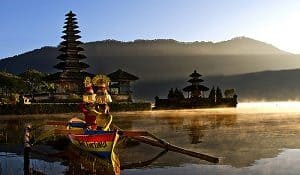 Ah, the iconic temple of Bali. You may see this one temple in so many occasions. In the commercials, even in our currency. The temple is very famous. Thanks to the Bratan Lake under it, the place is grow more and more famous by the day.

You can enjoy the lake first if you want. Just take a look at it, or having a boat and then exploring a bit around it. Then you can take the boat to the temple, right on the lake. You can finally see the greatness of the lake and the temple yourself. 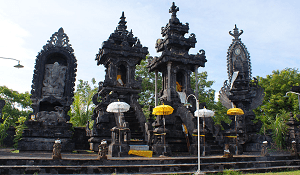 The next one is the Temple in the east side of Singaraja. You can find it easily with looking at the east spot of the area. Located near the mountain with cold atmosphere. There you can enjoy the calming situation of the mountain around the temple.

The temple itself is also considered very unique because the shape or form of it is not like the other temples. The temple looks more simple yet very unique. So that’s why you should come to Singaraja to take a bit look at it. 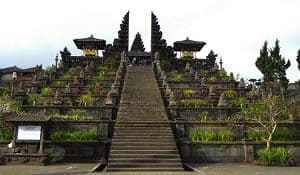 In the 15th, we have Agung Besakih Temple which is located in Besakih, Rendang, Karangasem, Bali. You can call it the temple of thousand steps. Thus, you can see the stairs there, that you must take to reach the temple. There are lots of them.

Do not get to excited, you can pass it as calm as possible. Then, the feeling after “defeating” those steps are rather exciting and satisfying. You’ll also be paid with wonderful view of the scenery around and the temple itself. 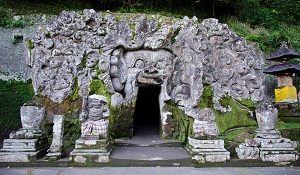 Goa gajah is actually the most unique of them all. First of all, the entrance. In the “main gate” you can see these stone carvings forming the face of creatures with the mouth as the door to go in. Then after watching and “capturing” the carving, you can finally enter the place.

There, you can see the historical things in there. Too bad we can’t show you what’s inside, it’ll be going to be a big spoiler for you guys. Then, to fulfill your knowledge and curiosity, just come to the Goa Gajah temple which is located in Bedulu village. 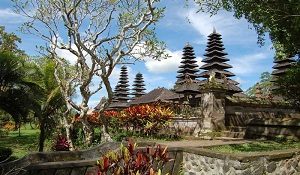 The last but obviously not the least is the Taman Ayun Temple. Well the spot is indeed full of fun, because around the temple there’s this calming pond filled with flowers, and then there’s museum right across the temple, and then another attraction called Wisata Mandala.

However before visiting those attractions, better do a little visit to the temple first to do whatever you do, like praying or just observing. You can take a look at this unique formation of the temple and the grass. The colour of both are contrast to each other. Really good for a picture.

Then our list finished here. Hope you can do well enough to fulfill your spiritual journey with calm and peace in heart and also mind. Good luck!

Other articles in Facts of Indonesia :