There are so many cultures in Indonesia, differ in every single way of religions, customs, and also the tribes. The number of these aspects is so many, even you can’t even divide them as a whole new culture sometimes. Like this one for example, the traditions in Lombok. In Lombok area of Indonesia, which is located on East Nusa Tenggara has this special tribe called Sasak. Sasak tribe is maybe already well known in your ears. They have so many different traditions we can inspect and learn in Lombok.

Interesting thing here, the people of Lombok have a very high antusiasm of the traditions that exist in their life until today. In this occasion, we’ll divide them into four categories, the Ceremonies, Traditions, and many other factors. So, let;s begin with the first part, the Ceremonies.

First we start from ceremonies which often held in Lombok island, as follows: 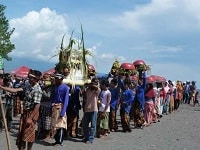 The first one on the list is the ceremony of Rebo Bontong. Rebo Bonteng often held to prevent the bad things to happen in their life or many called it as “Tolak Bala”. This ceremony is considered very important by the people of Lombok because of the meaning of it. They usually will hold the ceremony on the Wednesday (rabu/rebo) in the last week in Safar month. 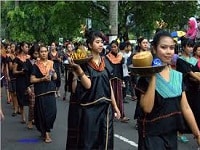 This one is a very religious one. Included with important persons, the ceremony is usually filled with so many people. They usually did this in a way to ask forgiveness and showing gratitude to God. So, he Bebubus Batu came from tow elements. First, the Bebubus, which is actually the combination between rice and other vegetables, and Batu means stone.

The stone is of course a sacred one, the place to held this ceremony. So, there wil be Kyiai, Pemangku, and complete with so many people of Lombok. They made this ting called sesajen or Dulang, which will be used in the peak of ceremony. 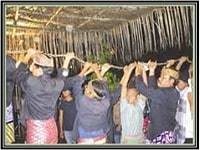 Sabuk Belo is a legendary belt that came from long times ago, which still carefully maintained by the people of Lombok. With its gigantic size of 25 meters, the belt can be considered as the longest belt in the universe. Who use this kind of belt? Well, you should learn the facts by yourself because there’s no clue about it.

However, they will carry the legendary belt all around the city during the Maulid Bleq, which only happen in 12 Raibul Awal Hijriyah year. The sight of the belt is absolutely the best thing you should capture, because it’s a 25 meters belt! You can’t see any like that everyday.

The last ceremony in the list of traditions in Lombok is also has the same purpose like Bebubus Batu. The ceremony has the meaning of asking to God. Usually, after showing gratitude, we humans will plea to ask Him anything we needed right now. Just like the thing in Turun Taun, people ask for the rain.

So as you guessed, the people usually do this during the long dry season in Indonesia. That season might be the worst situation of Lombok, either economically or geographic. The hard conditions have made some people feeling so tired of that. So, the Turun Taun might be the best solution, at least for them.

Next, we move to traditions which already maintained by Lombok people since ancient time, as follows: 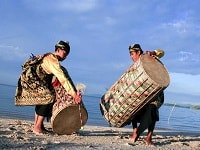 Gendang beleq is one of the instruments available in Lombok. Shape like a gendang, it has more bigger size than the original. They usually use the Gendang Beleq in some ceremonies like mentioned above.

Also, the gendang can carried by one person only, with a belt to hold it. It’s quite heavy to honest, and not so many people are strong enough to carry it all the time during the play or ceremony. Best to prepare your strength first before trying this. 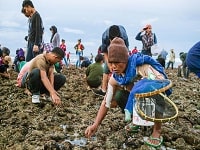 Bau Nyale is actually a legend that tell us about the epic story in Lombok. The story involves some important character like Mandalika princess. Somehow, it’s believed that Mandalika princess turned into a weird animals in the sea.

That’s Nyale, Nyake is the sea animals that you can find along the coast. Once a year, many people will come to the bach coast to hunt them. Usually they will cook them in their own home, or even use them as medicines. 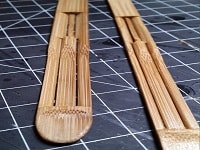 To operating this instrument, it requires a bit of extra attention and patient. With some training with the players, you can finally understand how to operate it. With that skill, you can play the Slober anywhere and anytime you want. Just don’t annoy somebody else with that stuff. 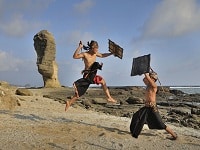 This is another great stuff in Lombok. Missing the fight like gladiator because you weren’t born yet? Don’t worry, the Periseian will give the same feelings as the gladiators fight. In this fight, you can use your shield or they called as “Perisei” to protect your body from opponent.

You can hit the opponent with the wood, hit them with your best shot. Don’t worry about some serious stuff, this is just a game after all. Just make sure to not hitting the enemy in the face or head. It can cause much serious damage you don’t want to do. 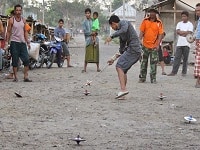 This thing is the thing maybe some of you called as Top or maybe Spinner. But in Lombok, the name is Begasingan, or Gasing in Indonesian. Usually the usual small gasing will be played by the kids, the small kids with their small toys. But Begasingan, is much bigger.

Because of the size, the thing usually played by the adults ad teenagers, the male ones. The spinner, or gasing is as big as a man’s palm. It’s too big for kids, and sounds even louder than original gasings. It’s actually a fun thing to do here, to spend the evening.

Lastly, we will ook up for the Cultrues. As you know that Indonesia has so many cultures around archipelago that you can miss it to watch and feel it. Here the information about Lombok culture, as follows: 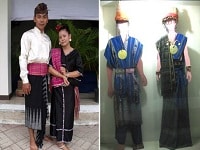 In several traditional ceremonies, the people of Lombok will gladly wear their own traditional clothes which look very beautiful. They are very simple clothing to use in our activities too, in special ones. So the male has this kind of clothing we called Sarung with a belt on it also added with a blankon on the head.

And the female also has the sarung or Rarang clothe, but putted in the shoulder. Both of them will use the dark colour, or the neutral colour as white. But, they look so great indeed, don’t you think? 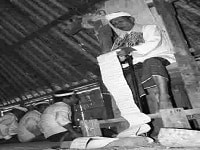 Maos is actually the activity to read the scrolls, filled with the story of the ancient past. Usually the story included the Kingdoms era in the past Indonesian history. They usually read this with 4 persons, with their own jobs.

The maos actually is a good thing to do in an era like this. So the kids or maybe the youngsters can understand how rich the stories of Indonesia in Kingdom Era has. They are really beautiful to understand, and to precious to keep. 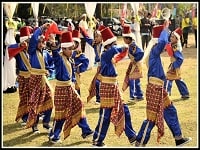 The next one is Rudat Dance. This dance is very famous in Lombok. Danced by the 13 persons that look like soldiers. They usually have their own unique clothings and lead with a commander, with more interesting clothing.

The dance looks really funny and entertaining for some reasons. Many people in Lombok like the dance, especially because of it’s a very crowd one and also full with funny soldiers. They also add some music that has Arabic and Indonesian lyrics, a beautiful combination. 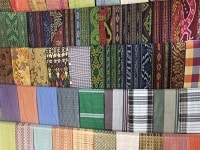 There are so many songket in their physical designs and motives. You can come to the village of Sukarar to directly see the process of making the clothe. You also can buy one or many clothes to bring home, choose your favorite!

On the other hand, after traditions and ceremonies, as well as culture, which often held in Lombok, now we will take a look about habits of Lombok people, as follows:

1. Cleaning The Floor With The Bull’s Poo

Even though it’s so disgusting, many people in Lombok always clean, or wipe the floor with the fresh bull’s poo. This is considered as the one of strangest thing that happen only in our beloved country. There are reasons of why they using the bull’s poo instead of soap, shampoo, or maybe the good smelling things out there.

Well, despite of the smell, they think that the fresh warm bull’s poo can make their floor more stirdy and strong. The smell can be gone in several minutes though, but the benefit you’ll get actually surprising. The floor looks more like a stoney floor now, we still don’t now why.

2. The Run Away Marriage

Marriage is the beautiful thing in humans life. To get a perfect marriage, two will be preparing all the stuff they needed and wanted to do for so long time. But in Lombok, the story can be a much different. If the dream marriage can be arranged base on your budget and dreams, the marriage in Lombok based on how luck are you getting kidnapped.

Yes, you’ve read the strangest word in our article today, kidnapped. So the girls are will getting kidnapped by some guy who like them most. Luckily, it’s not so illegal to just taking the girl and bring her home. After the boy’s parents plus the girl like him, then marriage will be settled in a shot. But the story will be much complicated if the girl doesn’t love the buy who kidnapped her. You can imagine that.

There will be dances, the musics, and good times to enjoy all the way until the night comes. And then, the couple can get to the next step which is living together in harmony. TheNyengkola will usually happen after the proper marriage consisted of Ijab Qabul and stuff.

Nebon is actually just a tell from a husband to her wive, to keep the wive’s hair more long and long during pregnancy. And the best thing for pregnant women out there is, the husband will do all of the things like cooking, preparing clothes, and the others which basically the wive’s jobs.

Nebon is usually focused on how well the men treated their pregnant wive. This habit considered as sweet and also respectful, especially toward the pregnant ladies. They of course need some times to lay down and relax, right?

5. Respecting The Bulls as The Holy Ones

Almost the same as India country, where they respect the cows, in Lombok they’ll respect the buls around their house. The bulls are considered as holy beings that couldn’t be harmed and disrepected.

So maybe that’s one of the reasons why they use the bull’s poo to “upgrade” the house, because tehir believe toward bulls itself. Seeing them respecting animals in the way like this is also cute to be honest.

Indonesia people love the spicy foods. Lombok is part of Indonesia, so that’s why they also love the richness taste of spicy foods. You can find so many variants of spicy foods that came from fish or another based composition.

In Lombok, you can find its traditional foods which dominated by the spicy ones like Nasi Pucung, and the famous Plecing. You can also try the other “strong” stuff in here called Kelepon Kecirit, which is really sweet.

Those are the traditions in Lombok. Hope you can find them interesting enough to make your day and making you more understand about how rich the cultures in Indonesia.