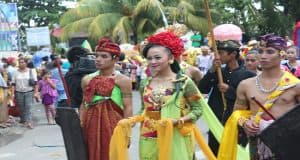 Merariq is a Sasak language which means married in Lombok. Here in this area, the wedding ceremony is done in a unique way in that first the bride will be kidnapped by the groom and be brought to the groom house, where it had previously been an agreement with the parents of the bride. Long story short, after then it’ll be done a procession of a wedding to validate the marriage of the two couples so as to be accepted by the community there. 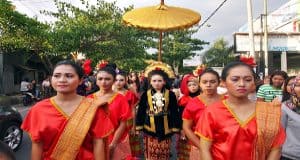 Nyongkolan is an indigenous activity that accompanies a series of events in a marriage procession on the Sasak tribe in Lombok, West Nusa Tenggara. This activity is the procession of the wedding, that is walking from the groom’s house to the bride’s house.

They are accompanied by relatives of the groom wearing traditional clothing as well as a group of music that can be a gamelan or group of tambourine and another percussion instrument to enlivened the event. 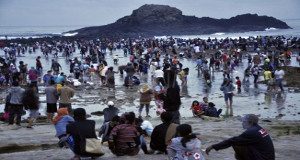 Bau Nyale comes from the Sasak language that means catch while Nyale is the name of sea worms in Lombok. Bau Nyale ceremony is a traditional ceremony of Lombok community conducted between February and March. The ceremony itself is a ceremony where people will go to the beach at high tides around 4:00 am to catch sea worms of “Nyale”, usually the catch of Nyale will be eaten and some leftovers are for sale there 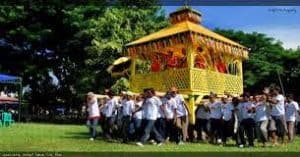 U’a Pua Ceremony is a ceremony related to the celebration of the commemoration of the Prophet Muhammad SAW. The ceremony was held for seven consecutive days, displaying the attractions of the community of Mbojo from Bima, which begins with a parade of the House replica of Bima followed by all the surrounding society, dancers, and arts groups to make the event much more lively. 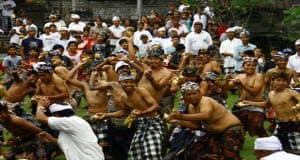 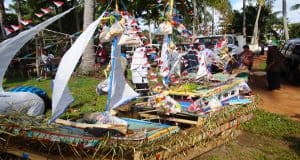 The Ceremony of Buang Au or throwing ashes is one of the local cultural treasures of Sasak people, ethnic majority in Lombok, West Nusa Tenggara. Throwing Au is a term used by the Sasak people to celebrate the baby’s birthing ceremony, a week after the completion of labor by the mother.

At the ceremony, a week after the charcoal was burned and laid, the charcoal that had become ashes was then taken and thrown away. This process of disposal of ash is then known as the ceremony of Buang Au. 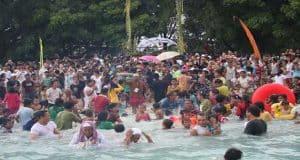 Rebo Bontong ceremony is held on Wednesday of Safar month in the Islamic calendar. This ritual is a shared bathing in a certain place. In practice, a series of prayers are offered on the day of the ceremony.

Religious leaders and various people who follow this ritual deliver Sesangi offerings of sticky rice, eggs, bananas, and other farm produce to the sea, as a symbol of a request to God to ask for protection from any disaster that might happen to them. 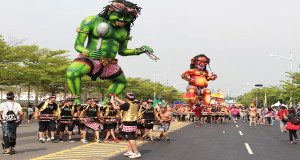 In support of the Nyepi feast which is the day of purification of Bhuana Agung in the ceremony of Tawawa Kesanga which aims to neutralize the negative power of Bhuta Kala. This ceremony is held on Tileming Sasih Kesanga day before the implementation of Nyepi holiday.

In the district of West Lombok and Mataram, the ceremony of Tawur Kasanga is coupled with Ogoh-Ogoh Parade. Ogoh- Ogoh is the creativity of Hindus in Bali and Lombok to visualize Bhuta Kala. 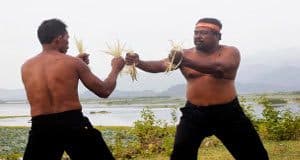 Barempok is a tradition of peasant communities in West Sumbawa that use rice bonds as a means of punching each other to express a sense of joy over the harvest they earn. Dozens of men take turns dueling in the arena.

However, in this fight, it is not a boxing glove that is worn on their hands but a few dry straw sticks that are rolled onto the fist. The event is accompanied by the traditional music while they were fighting. Because the nature of this fight is boxing then three referees are deployed to oversee every game. 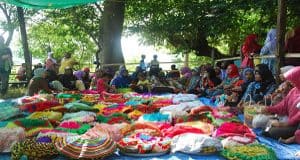 The peasants in Sumbawa, West Nusa Tenggara have a unique tradition to requests the fertility of their crops. The tradition known as the Ponan party is held by citizens every harvest season. This heritage tradition is the symbolic form of gratitude and the event of praying to the divinity.

Therefore, that the local community harvest is abundant and far from a failure or pest outbreak. This tradition of Ponan Party already included as one of the Sumbawa tourist Calendar Year. 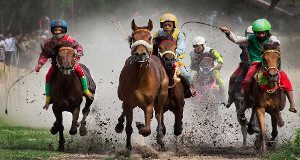 Pacoa Jara is a Dompu term for horse racing which has become a favorite sport of Dompu and Bima community and routinely held from local to national scale. Participants come from Dompu also come from various regions such as Bima, Sumbawa, Taliwang, and Lombok.

In addition, to witness the excitement of Pacoa Jara then you can visit Lepadi Racetrack at Lepadi Village, Pajo Subdistrict, Dompu Regency, West Nusa Tenggara Province 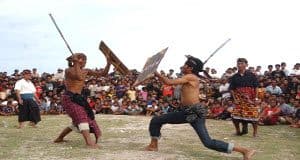 Peresean is part of a traditional ceremony on the island of Lombok and is included in the art of Sasak tribe dance. Peresean art shows the courage and agility of a fighter, this art is backed by the emotional impingement of the kings of the past when a victory in the war against the enemies of the kingdom.

On the other hand, what is unique in this fight is that participants are not prepared before as the fighters are taken from the audience itself, meaning that the spectators challenge each other’s audience and one player will lose if their head or limbs have been bleeding. 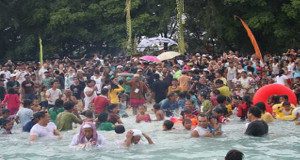 Segare Rare is a tradition of coastal communities south of Central Lombok district by conducting the celebrating ceremony as an expression of gratitude to their Creator of the blessing that comes from the ocean and as well as to repel any disaster and reinforce the safety of the coastal communities where the sea and land formed their livelihood longevity of life. 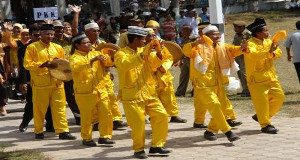 This type of art attraction has grown tremendously since the 16th century. Hadrah Rebana is a kind of attraction that has been influenced by the teachings of Islam. The lyrics of the songs that are sung are songs in Arabic and usually contain spiritual messages. Until now Hadrah Rebana has grown rapidly to all corners.

Furthermore, it is encouraging that Hadrah Rebana continues to grow and be created by artists in Bima. And a lot of works of movement and songs that accompany the performance of Hadrah Rebana. 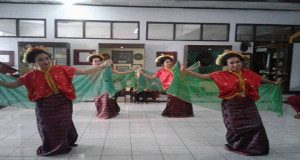 One of the cultural arts of Lombok is Rawa Mbojo. This art is one of the media of delivering the message and the advice that is presented especially at night during harvest season while storing rice in a barn. Rawa Mbojo, accompanied by violin song combined with poetry and rhymes are full of advice.

As a compliment, then it is presented also a story charmer who brought the fairy tales that are interesting and has full of life meaning that’ll captivated the audience. 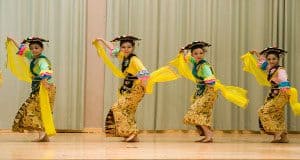 Meanwhile, Lenggo dance was originally a classical dance that appeared and developed in the palace environment of the Kingdom of Bima, and only displayed on certain occasions only. 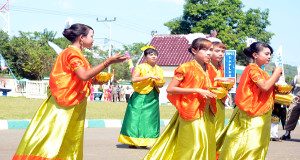 Wura Bongi Monca dance is one of the welcome dances for welcoming guests from Bima, NTB. This dance is performed by female dancers in groups with gentle movements while sprinkling yellow rice as a symbol of respect and hope.

On the other hand, Wura Bongi Monca dance is one of the traditional dances that are quite famous and still often performed at various events in the area of Bima, NTB.

The traditional ceremony in Lombok represents the unique culture and heritage that Lombok people has in their community. This is an important identity that has permeated much society there and in turn, will make many tourists visit Lombok as a way to learn the harmonious and pristine living condition of their region.