Home » History » An Amazing History of Pottery in Indonesia 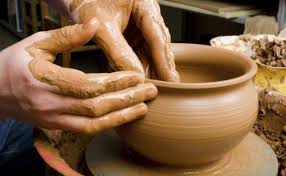 Pottery is the objects made of earth and water elements that become extraordinary because it has passed through various times, but still can be found. Shapes, materials, and ornate patterns are sometimes the key for those skilled in further analyzing the artist’s culture of pottery.

Based on the results of research in Indonesia, pottery has been known in Indonesia since prehistoric times are estimated to be used and developed by humans who support the early farming cultivation. For more information, here is the history of pottery in Indonesia.

At that time, the craft of objects including pottery reached its peak development. Making pottery in prehistoric times turned out to have a significant development from the start of simple shapes and ornamental patterns to a more complex level again. In the early years, at the time of cultivation, everything might be shaped and worked by hand without technique or other tools.

The earliest technique of making pottery is a circular technique. The best clay is pounded and stirred to have a perfect density. The clay is then twisted and then made a coil gradually until the coil creates the shape and has the space. Each circular twist is subsequently trimmed using a finger and then the smoothing process using a stone or shell.

Including the relics of Majapahit Kingdom (16th century AD) found many bricks and tiles of clay than burned as building materials, but also objects such as piggy banks. Pottery fragments were also found on the Batujaya site, in Karawang, West Java. It was found fragments made of terracotta. Appropriate marking of these pottery-pots were exist in the 3rd century or 4 AD.

Pottery images are also found on the building’s decorative reliefs, and sculptures. This gives an indication that the tradition of making ceramic objects with simple technology has long been going on. Other artifacts are depicted on the reliefs of Borobudur temple showing the motives of women who are taking water from a pond with round pots and pitchers and cooking with a cauldron.

While the reliefs of Prambanan temple and Penataran temple (Blitar) depict vase of flowers with embroidered ornaments and flowers. This legacy also illustrates the existence of ceramics activities in the rural people and a lot to do with the discovery of the needs of the container.

The technology of making ceramics can be said to start developing with the establishment of Ceramic Laboratory or “Het Keramische Laboratory” in 1922 in Bandung. The main function of this laboratory as a center of research on building materials such as bricks, tiles, water channels and so on made of clay. Besides developing also glaze technology for fine pottery items called ‘aardewerk’. Glaze material imported from the Netherlands.

Furthermore in Plered Purwakarta erected a ceramic factory with complete tools of mass production to process clay material. This factory serves as a parent who provides guidance in the manufacture of building materials and smooth glazed earthenware to the local craftsmen. The ceramic factory in Pleret, which is intended as an extension center in West Java, was forced to go out of business. While the parent center in Bandung his life is still uncertain existence.

But despite the import of this technology, Indonesian ceramics have not progressed rapidly. The ceramic extension center is targeted at rural pottery life only. The townspeople were not familiar with high-burning ceramics at the time, and preferred to use imported goods from China or Europe.

With the entry of Japanese troops, the ceramics factory in Bandung has been renamed “Toki Shinkenjo”. This laboratory serves as a research center that researches and develops and manufactures ceramic items with high fuel temperatures. The products include: refractory brick, bottle sake, and so forth. The goods are made for the needs of Japanese troops in Indonesia.

Since the government was held by the Indonesian Republi, “Toki Shinkenjo” changed its name to Ceramic Investigation Center (BPK), in its operation equipped with the tools of testing and the tools of production more modern. The functions and duties of BPK are growing, not only conducting ceramics, glasses, electrical insulators but also actively conducting research activities of ceramic raw materials found in ceramic materials in several places.

With the discovery of abundant raw materials such as kaolin, felspard, quartz and so on, then since the 1960s years of emerging ceramic factories in some various city. Its products are also various such as pottery products, stoneware and porcelain, the type of production include cutlery and pottery, decorative items, fireproof goods, refractory brick, engineering tools, casts, emails, and building materials.

The life of pottery began to rise. The growth of small and medium enterprises engaged in ceramics such as in Bandung, Plered-Purwakarta, Klampok, Bayat-Klaten, Malang, Yogyakarta and other areas outside Java. With the passage of time, and with the higher education of fine arts such as ITB Bandung, ASRI (ISI) Yogyakarta, ASTI (ISI) Surakarta and other universities began spawning ceramic academic artists who helped turn the ceramics world today.

However, amidst the progress of the ceramics industry, the Indonesian ceramics industry has not made significant progress although the progress in this ceramic field has become a market demand. This is because the facilities and infrastructure, in the form of tools to develop the ceramic industry is expensive. Besides it’s a technology that is as hard to come by. For materials for advanced ceramics should be more pure material.

However, some efforts to develop the ceramics industry, in the form of researches are still being conducted. As the example are some activities in designing the development activities for ceramic objects in industries such as Sango Semarang, ceramic industry in Tangerang and in other industries.

Those are the long history of pottery in Indonesia. In conclusion, we need to preserve everything that included the part of the culture, so is the pottery.

The Number of How Many of Indonesia’s Islands are Inhabited