Home » History » A Glance at the History of Television in Indonesia 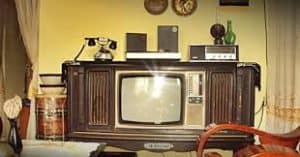 Watching television now is not an entertainment anymore. TV has been used as electronic needs number two after the smartphone in Indonesia. Almost every home in Indonesia now has a TV. In fact, not infrequently every room and room there is a TV.

Watching TV remains an entertainment and an important source of information for most people in Indonesia. However, before the television industry in Indonesia reached the good point as it is today, the world of TV developments in Indonesia is quite interesting to review. Here is the long journey for the history of television in Indonesia.

Television began to be introduced around the world as a tool that helps spread information to the general public. Television began airing for the first time in Indonesia on August 17, 1962 which at the same time with the celebration of the 17th Republic of Indonesia Proclamation Day.

The broadcast firstly broadcasted a ceremony of the Independence Day celebration held at the State Palace and lasted quite short ie from 07.30 to 11.02 WIB. On August 24, 1962, President Soekarno inaugurated the first Television in Indonesia named Televisi Republik Indonesia (TVRI).

This is the most important phase that is the main milestone of the birth of Televisi Republik Indonesia (TVRI), which was then only aimed to cover the Asian-scale sports event that is the fourth Asian Games held at the Main Stadium Senayan, Jakarta.

Formerly television was a luxury, but now it has become a common item and easily purchased by various circles of society. Well this time we will only briefly discuss about the start of the color television in Indonesia, because previously it was the first time Indonesian citizens just enjoy the black and white television.

The first Indonesian TV commercial appeared in 1963 and was still a slideshow of print ads. Products advertised at the time were Hotel Tjipajung advertisements, heavy equipment and truck products from PT Masayu, Indomilk milk, Sedaaap milk, Anker beer, Mascot cigarettes and Vespa motorcycles. Toward the end of the 70s such ads that are familiar now began to appear frequently.

In Indonesia, anything related to national development, such as the history of the founding of the Bogor Palace could be witnessed and recorded in the form of a message that was only charged with the use of television.

The extent to which the television media has a function in supporting the rate of development of democratic systems in Indonesia in various forms that can be used as a medium to provide public education to become more critical, more educated and become a more mature and cultured society.

People in Indonesia watched television for the first time in 1955 or after 29 years since television was introduced in 1926 and after 26 years since the first television show aired in the world in 1929. Television originally brought from the Soviet Union during the anniversary of Yogyakarta city to 200 years in Yogyakarta.

On July 25, 1961, an agreement was made to establish a committee tasked with preparing for the creation of television stations in Indonesia. After one year of preparation such as making studios, building broadcast towers, and preparing other technical stuff in place previously used for the Information Academy in Senayan.

Television Impressions for the first time trial was covering the 17th Anniversary of the Republic of Indonesia’s flag ceremony on 17 August 1962 directly from the Merdeka Palace in Jakarta. The celebration of independence was held by the Television Television Division and the Bureau of the Television Organizing Committee, and to this day it is known as the birth of Televisi Republik Indonesia (TVRI) which is the first national television station owned by the Indonesian government.

Read also: Why Indonesia is the Happiest Country

The year of 1962 is a national television milestone Indonesia where is the stand and operation of TVRI. In its development TVRI became a strategic tool of the government in many activities, ranging from social activities to political activities.

For decades TVRI held a broadcasting monopoly in Indonesia, and became a media of government. Since the beginning of the existence of TVRI, news broadcasts become the mainstay. Even “Dunia dalam Berita” and the “Berita Nasional” aired on the main hours. Even Metro TV became the first TV station in Indonesia that focus on news, like CNN or Al-Jazeera.

Initially, the agreement to establish television was only from the short telegram of President Soekarno while he was traveling to Vienna, October 23, 1961. It was hard to imagine how troublesome and troubled it was at that time, because even to choose which equipment from what company was still guessing.

In its development, private TV gave birth to more varied news broadcasts. Newscasts that are straight news, such as Liputan 6 (SCTV), Metro Malam (Metro TV), and Seputar Indonesia (RCTI) were not the only news television sets. Less depth straight news was changed by TV stations with depth reporting broadcast, which reviews the news in more depth.

The second milestone in television was in 1987, when the issuance of the Decree of the Minister of Information of the Republic of Indonesia Number: 190 A / Kep / Menpen / 1987 on limited channel broadcasts, which opened up opportunities for private television to operate.

The Dark History of Violence in Indonesia