Coral reefs are the variety of underwater ecosystems which built by colonies of tiny animals in marine water that contains a few nutrients. Etymologically, the term coral reefs refers to coral (the collection of animals from Scleratina order) and reef (sedimentary rocks in the ocean). The sedimentation itself can be derived from the limestone which is produced by corals. Indonesia as a country which has many islands and beaches, also has many beautiful coral reef locations which will amaze you. 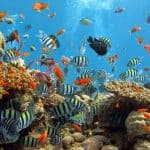 Bunaken is an 8.08 km² island which is located in Manado Bay, exactly in the northern part of Sulawesi island. Bunaken sea park itself is a sea park located in Bunaken island which has of the highest marine marine biodiversity in the world.

This national park represents Indonesian tropical water ecosystems which composed of mangrove ecosystems, seagrass beds, coral reefs, and land or coastal ecosystems. There are about 91 species of fish found in this national park. 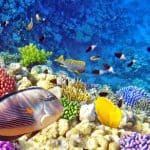 Raja ampat becomes one of the most famous tourist attractions in Indonesia. This island is a series of four group of islands clusters which is located in the western part of of Kepala Burung (Vogelkoop) in Papua island. Including as a part of cendrawasih Bay complex, a 4 millions hectares Raja Ampat island becomes the biggest marine park in Indonesia.

Raja Ampat is the richest and the most diverse in the world’s coral triangle region (Philippines, Indonesia, and Papua New Guinea). What is coral triiangle region? It is the nickname for the countries which becomes the heart of coral reef in the world therefore those regions are protected and being an natural conservation regions.

For the divers, Raja Ampat is considered as the world’s underwater heaven. You do not have to dive and go into the deep sea to see its beauty because almost all of the sea contents are visible in the shallow sea contents. 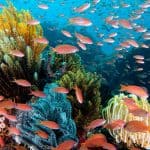 This is the name of a national park located in Wakatobi regency, Southeast Sulawesi Province. This national park is a heaven and the center of the world’s coral reefs as well as marine tourism object for those who like underwater adventure. The coral  marine biodiversity is varied.

This national park is officially a world underwater research center. This marine park is popular globally espeially after Wallacea Expedition done by England which stated that this area is rich with coral species. The underwater topography is beautiful and colorful, there are more than 112 coral live here.

To enrich your insight about Papua, read here : Facts about Papua Indonesia 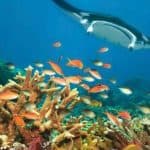 This island is located in East Kalimantan, has three diviing spots which is nominated as the third world’s international diving destination. The underwater biodiversity is also rich with 460 types of coral reefs and 832 species of reef fishes. 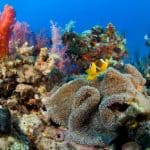 This national park is composed by several small islands and shallow sea water. It has three main component which form the ecological system, that is: coastal forest, mangrove forest, and coral reefs.

On the other hand, the coral type of this national park is fringing coral reef, the coral reef’s authenticity is still protected. 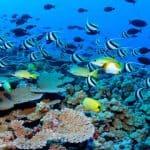 Not only that, there are also some ancient fishes and shell fish such as napoleon fish. In 2006 this marine park is categorized as the World Herritage Area for Indonesia’s underwater paradise due to its beauty. 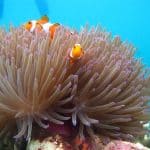 Kaimun Jawa is another island which is famous with coral reefs, consists of 22 islands and has 5 ecosystems types which is coral reef, seaweed and sea grass,  mangrove, coastal forest, and lowland tropical rain forests. Those ecosystems are the habitat of various flora such as Dewadaru, Kalisamada, and Setigi.

The fauna that is protected in this area such as green turtle, hawksbill, golden junai, and conch gel. Karimun Jawa sea has several coral reef types, those are fringing reef barrier, barrier ree, and patch reef. The most attractive part in Karimun Jawa is red coral and black coral which is getting rare. Another attraction object is a shipwreck which becomes the habitat for reef fish. 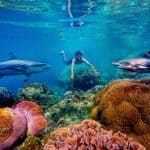 This marine park’s characteristic is the existence of caves as well as the basal contour which has temperature 60-90 degrees . The flow of the water is unique in this strait because it is always changing its direction. 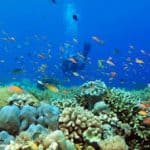 This marine park is located in South Sulawesi, considered as the third largest atoll region in the world after Kwajifein in Marshall island and Suvadiva in Maldives.

Furthermore, Atolls here is formed as the result of volcanic eruptions which submerged 2.000 meters beow the sea level.

The atoll is forming a round reef like coral reefs which is the habitat of various marine plants. When you dive into this marine park you can find nudi fish, cuttlefish, barracuda, pari, and bump head fish in the depth of one meter.

Beside what I explained above, here i give you a stunning view of wonderful and catchy coral reefs in Raja ampat, Indonesia. Check this out.

It is such a blessing that Indonesia has many beautiful coral reefs which will satisfy those who like underwater diving. Those are only some brief explanations, to know more information you may see Indonesian Coral Reef