Okay guys, back here again with your friendly neighborhood author here, we’re gonna talk about some more interesting facts of Indonesia. We all know that Bali has some interesting temples, right? Those temples stand on the land, on above the water. But here, we want to tell you about much interesting stuff, the underwater temples in Bali.

We knew that in some years back then there’s this thing that people always talked about, the founding of the water temple in Bali. After that, there were many speculations told by many people back there. Even archeologists take part in this. But, sadly none of them were truly the built by people in some centuries back then or as we call the ancient people. Here is the examples of some interesting findings about water temples in Bali. Even though some of them aren’t exactly the water temple, but they are worth mentioning in here. So check this out : 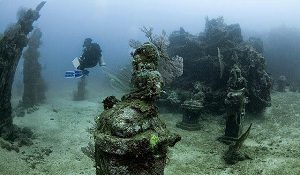 People shook about this. This underwater temple was really made people more curious about it, and make people wonder the where is the location the temple. The temple located exactly in the sea side of Pemuteran Bali. Many archeologists also try to find out, what exactly the thing is, is there any history related in here or something that needed to be found out. That’s why, this beautiful underwater temple became a huge phenomenon in Bali in that time.

After some times passed, the truth finally comes out. A guy named Chris Brown clarified this fussy things about the temple. So, the guy and his friends including his best friend Paul Turley, built this place as conservation in the first place. They start to drop all the things in the temple in the year of 2005. So, Chris and his team bought some of the temples form the crafter, and then just drop it in the sea.

So, all the things about the Atlantis or ancient history are actually just a myth and gossip. The place is actually a the most visited diving spot in Pemuteran, they even named it as Taman Pura. Many divers come in the place until now, just to take a look at the exotic and spectacular under water temple of Pemuteran.

For know more about what underwater temple of Pemuteran Bali look a like, here the visual information for you to make it easy to understand. 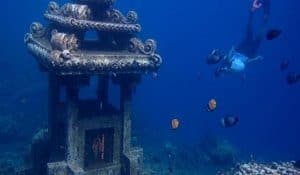 Now now, there’s another underwater temple in Amed Bali. The shape is very temple-ish right, you can consider it by looking at some references in the internet. This one also speculated by some people that this is one of ancient heritages. Well, it turned out the other way. The temple is actually a mail box. Yep, you heard me right, it’s a mail box.

This mailbox is located exactly in the area of Jemeluk Beach, Amed. The Pos Indonesia (Indonesian Post Company) actually drop this “temple” as the first underwater mailbox in Indonesia in October 2011. With this, you can also send some postcards in there, with the water resistance post cards of course. You can get one by the Coral Reef Aliance near the beach. It’ll cost you Rp10.000,- per post card though.

So, if you really want to try the interesting experience about sending post cards under wtaer, maybe this time is the perfect chance for you to do that. Beside that, you can aslo diving around the “temple”, looking at some beautiful corals that exist in there. It’s really spectacular though.

Then, as always, for know more about what underwater temple of Amed Bali look a like, here the visual information for you to make it easy to understand.

3. The Statues in Nusa Dua 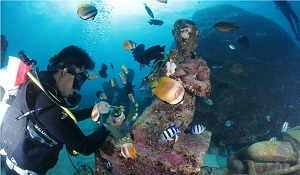 Well, this one is the starter of the 3 remains spot that are not the water temple (maybe look like one) but also worth mentioning. Talking about temple of Bali, there are many aspects can be found withing, like the statues for example. Even though you can’t found the underwater temple in this Nusa Dua Area, but you can found the statues there. One of them is the woman dancing graciously. Well, here is some facts that maybe you want to know.

The statues located in Nusa Dua Bali is actually the act for coral conservation, held by Nusa Dua Reef Foundation. They aim to conserve the corals and fish ecosystem by planting these statues in order as a home for the fishes. They did it firstly in the 90’s, because the ecosystem back there was terrible. Beside conserving the corals, they try to protect the endangered species of the Kimsa clams. Many hunt the down because the clams have very high economic values.

So, in order to maintained their existence,the organisation of NDRF built the statues. As a “tool” for protecting all the living beings in the ecosystem.

On the other hand, for know more about Buddha Statue in Nusa Dua Bali look a like, here the visual information for you to make it easy to understand. 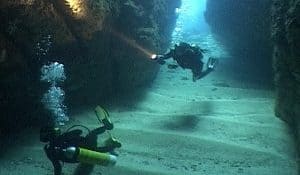 The next one is the “temple” in crystal Bay Nusa Penida.  Different from the Nusa above, Nusa Penida doesn’t have something related to the temple actually, but here is something interesting that you can find. While diving inside the Crystal Bay area of Nusa Penida, you can continue your journey to enter the dark cave in there.

Meanwhile, the cave is actually the entrance to go to the Bat Nest there. From afar, the cave looks like the exterior of a temple, just like the usual Balinese temple that you may found in up above.

The journey may be a little bit challenging though, you can add some friends if you’re scared enough. Don’t forget to bring at least a lighting to help your journey there. It will be dark all the way to the cave, so prepared all the required things like oxcygen support and also don’t forget the lightnings. Upon arrival, you can see the nest by yourself, the Bats may be a little bitey sometimes. So, the cave is actually a connector between the sea and the bat cave up above. So, there will be some uphill ways you need to take.

Actually, the information about the cave is unknown, either information or history. Also there aren’t many people know about this place yet, because they usually just hanging round at the beach and some usual diving spots in Nusa Penida area, in the Crystal Bay itself to be exact. So, with some considerations, you can either go or pass the cave. But, you’ll pass the greatest secret found in Nusa Penida area. Do you actually want to miss that? 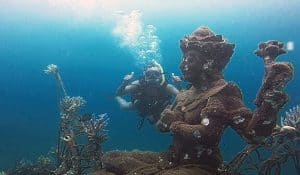 First thing first you can see in here is the existence of the statues located right in front of the Matahari Tulamben Resort. They built them in 2013 to attract more tourists to the whole new level of their unique diving spot. In the spot you can find the Buddha statue and another Goddess called Tara which is the mother of Him. Beside those you can find other different statues. Beside the existence of the statues, there’s one other thing you should check in Tulamben.

A little bit far from the actually temple, this gigantic thingy is actually has some histories behind it. The gigantic thingy that you can find in here is none other than the giant shipwreck of the USAT Liberty Glo. Let me tell you about the history of it. The ship is actually a cargo ship, built in the year of 1918 to serve the American soldiers at World War 2. So this ship’s job is to deliver the needs of the soldiers like weapon or foods. Sadly, the ship sank in years after that, attacked by the Japanese submarines. Then the ship “rest” there for all the time being.

Then in 1970, people near there found the ship and making it as tourism spot, until now. But you may be careful when diving to the ship there because there are so many beautiful corals that covered the ship with wonderful degrading colours. Don’t you break the corals, because it’s against the regulations there. Of course, there’s diving regulation in there, so you must respect it.

On the other hand, for know more about God Statues look a like, here the visual information for you to make it easy to understand.

Then our list is finish. Maybe you want to check those spots to prove them by yourself if you’re curious enough. Surely, it’ll be a great experiences you’ll get. Then, happy diving!

Other Facts of Indonesia articles :