Home » Place » Bogor Botanical Garden, A Garden You Can Visit in West Java 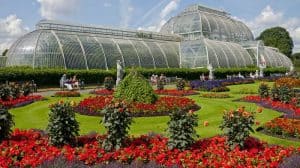 Bogor Botanical Garden is the largest plantation preservation area located in Bogor, West Java. It approximately has 15000 plant species preserved, breed, and researched. Nowadays this garden is open for public as tourism site. It offers various kind of tourism site such as gardens, museum, laboratories, monument, and cemetery.

Bogor Botanical Garden has been around since Indonesia consisted of multiple empires and kingdoms. This garden was established under Sri Baduga Maharaja (1474-1513) from Sundanese Kingdom. The purpose of this garden is to preserve the ecosystem and to produce seeds of rare wooden. This garden was left behind after Sundanese Kingdom had been defeated by Kingdom of Banten until Dutch occupation in Indonesia.

In 19th century, Thomas Stamford Raffles, who served as the governor at that time, had curiosity about botanical research. His friend and he began to build a beautiful garden in the Bogor Palace. Time to time, most of scholar from the West who comes to Indonesia, transformed the land around the palace to become a big garden in purpose of preservation and development of useful plantation (for example for medical purpose), teaching learning program, and collection of plantation.

Bogor Botanical Garden received its official name in May 30th, 1868 and separated its administrative program from Bogor Palace.

2. Bogor Botanical Garden has the Oldest Lychee Tree in Indonesia

The garden is a place where a lychee tree have been living there for 194 years. It’s believed that the tree was imported from China in Colonial Era. This tree is a witness of the garden’s development.

Bogor Botanical Garden also has the largest orchid collection in the world named Anggrek Harimau (Grammatophylum speciosum). Guinness Book of Record records that this Orchid is the tallest orchid in the world, with its potential of having 7.5 meters in height.

3. The Pioneer of Indonesian Science

Bogor Botanical Garden marks the first introduction of science to Indonesian people. This garden gives birth to research about plantation. Then, in the future, the possibilities of other major can be touched such as medical studies and technology.

Thanks to Bogor Botanical Garden, Indonesian people now has access to boarder idea of science. Even they now combine some major to create more effective and newer invention that could help some actors in need. For example harvest technology that combines plantation studies and technology.

4. It has various collection of Plant

Bogor Botanical Garden has approximately 12.531 collection of plantation species ready to be researched and preserved making it one of the garden in the world that has the most complete collection.

In its laboratory, Treub Laboratory, scientist named Hans Fitting and Boysen Jensen invented a hormone named Auksin that influenced the agricultural sector in the world. It’s also the first time that a group of scientist can breed the rare flower originally from Indonesia, Rafflesia Padma. It’s one of the biggest accomplishment the garden has ever done considering that breeding Rafflesia is not an easy task to do.

5. The House of Orchid

This section in Bogor Botanical Garden is a home for around 500 orchid species that originally come from Indonesia or as the result of hybridization. The left side of the green house is the place where wild orchid is displayed.

While the right side is where hybrid orchid is displayed. In this exact area, you can find the biggest orchid in the world Grammatophyllum speciosum that has 7.5 meters in height.

Jalan Astrid provides a long street with colourful flower surround you. It has 200 meters long and in each side, there are a flower called Canna Hybrida, colourful flower with red, green, blue, orange, and yellow.

Jalan Astrid is one of the best spot to take photo to feed the content of your social media.

There is one big building tagged with name Laboratorium Treub in Bogot Botanical Garden. This laboratory was established in Dutch colonial era due to research necessity.

In this laboratory, phytochemicals is developed in Indonesia for the first time. This laboratory is named after botanical scientist that devotes himself in this subject for 30 years. That person is Melchior Treub, the founder of Landbouw Hogeschool, now it’s Institut Pertanian Bogor (Bogor Botanical Institute).

This spot is one of legendary spot in Bogor Botanical Garden. Lady Raffles Monument is a love letter from his husband, Thomas Stamford Raffles. Visitors can look after his poem exclusively written for Lady Raffles. This Monument is also called The Monument of Love.

Straight from Lady Raffles Monument, visitors can visit Gunting Lake where they can take a break and witness the lake’s beauty.

Sir Georg Karl Reinwardt is the founder of this conservative garden. Back to 2006, to honour his devout, LIPI (Indonesian Institute of Science) alongside with German Ambassador, built an epigraph dedicated to Sir Reinwardt.

Not far away from the epigraph, visitor can find a white building with colonial architecture with green colour dominating the area. This place is Bogor Palace that was established in 1745, 200 years before Indonesian independence. This is an obligatory spot for visitors who curious with Indonesian history.

Bogor Botanical Garden was taken over by the Dutch government after they won the battle against British troupes. Then the Dutch government built cemetery around the place to bury fallen soldier or important people at the time. Some of them are Heinrich Kuhl and JC Van Hasselt who contributed their idea in flora and fauna development in Indonesia

Zoologi Museum provides information about the richness of flora and fauna all across Indonesia. This museum displays various fauna in canned. Other than that, there is diorama about the battle between deer and wolf.

The uniqueness about this museum is that it uses real animal that’s canned so it doesn’t alter its size or colour. Visitors can see rhinoceros, snake, and sea creatures with its original size. There are about two thousand species displayed in the museum.

The most interesting one is that there’s a skeleton of blue whale that’s believed as one of the biggest mammals in the world. The skeleton is still complete and the official keeps it in an exclusive room.

12. A Storm had ever Struck and Broken the Garden

In 2006, a storm hit Bogor Botanical Garden and broke 124 trees that are already more than 100 years old. Because of that, the official decided to close the garden to repair the damage caused by the storm. The loss was expected to be millions of rupiah and also hundreds of collection.

In June 30th, 2017, Barrack Obama, former president of United States of America, had visited Indonesia as his friendly visit program with Indonesia. Indonesian president at the time Joko Widodo received his arrival in Bogor Presidential Palace then invited him to have breakfast in Grand Garden Café in Bogor Botanical Garden.

Those are some interesting facts about Bogor Botanical Garden. Not only it serves as preservation area, but also it offers tourism activity that touches historical, environmental, and cultural perspective. Bogor Botanical Garden is perfect example of how a national park should be. It opens for public and offers various kind of tourism activity but also preserve important flora and fauna as well.