10 Rare Flowers In Indonesia (#8 is beautiful)

Indonesia is a country which is rich for its natural resources. Various plants especially flowers are growing well in Indonesia. However the existence of some Indonesian flowers are getting rare so that those flowers are in dire need to receive some protections. Below are the list of some rare flowers in Indonesia, check it out! 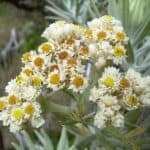 This is an endemic flower which live in  alpina / montana zone in various mountains in Indonesia. This flower lives in  mountainous areas with altitude between 800-3400 m above sea level. Known as eternal flower because  it is very durable and not being damaged easily. Based on the IUCN redlist, Javanese edelweiss included in the category of threatened or plant under threatened conditions.

This condition is emerged due to the fact that this flower is available in the mountain climbing route so its existence is disrupted by the human’s activity when climbing mountain. For those who likes to clim the mountain, read this Best Mountain for Hiking in Indonesia. The characteristic feature of this flower is a bushy shrub with white fur,  has many branches, gray-white colored twig, the flower shaped like small hump, and this flower attracts various insects. 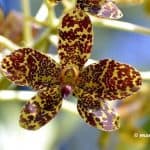 The panicle has hundreds of flower which has diameter up to 10 cm. Sugar cane orchid grows in lowlands area in the places with tropical climate. Sugar cane orchid needs sunlight to grow up well. This flower is protected by the local government due to its uniqueness and scarcity. 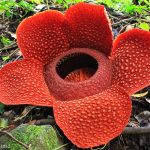 Rafflesia arnoldi is the most popular flower in Indonesia, its existence even being acknowledged by the international citizens. This flower is considered s the biggest flower in the world because its diameter is up to 1 meter and its weight reach 10 kg.

Rafflesia is an endoparasite to a plant and came from Tetrastigma genus. The only part of the Rafflesia plant that can be seen outside its host plant which is a five-crowned flower.

Rafflesia is widely known to the public is the type of rafflesia arnoldii. This species only grows in the forests of southern Sumatra, especially Bengkulu. Both rafflesia and carrion flower have bad odor, The main feature that distinguishes rafflesia with layered carrion flower is the form of rafflesia which is widened (not high) and it has red color. Rafflesia flowers have no roots, stems, or leaves. The flowers have 5 crowns. Rafflesia has  stamens or pistils on its bottom part. 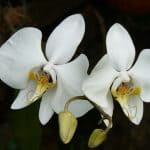 Moon Orchid is one of Indonesian national flowers. It is nominated as Puspa Pesona Indonesia, this flower is categorized as puspa pesona because this of this orchid character and beauty which represents Indonesia’s beauty.

The moon orchid is firstly discovered in Maluku and it has different names according to the pace where it grows; orchid wulan (Java and Bali), orchid fly (Maluku), and orchid menur (Java).

The moon orchid  is a type of orchid (Orchidaceae) which has distinctive characteristic, its petals are wide and white-colored. This flower is included in  monopodial orchid plants because it likes less sunlight as a life support. The leaves are green with elongated shape, the root is fleshy, and it is fragrant when it is blooming. More moon orchid variety is emerged as the result of orchid crossing. 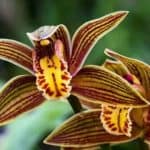 Tien Soeharto was Indonesia’s first lady in the past and this orchid is named after her to commemorate her effort to develop orchid in Indonesia.

Anggrek Hartinah is one of the soil orchids which grows in a group. This orchid likes an open space to grow between grasses and other plants such as fern plants, kantong semar, etc, at the altitude of 1700 meters above sea level. The leaves have tapered shapes  with a length of 50-60 cm.

The flower has star-like shapes and it is quite thick. The petal leaf is as big as the crown petal. The top part has  yellowish green color and the bottom part has brownish color with yellow color at the edges. This flower is considered as Sumatera’s endemic flower because it only grows in Sumatera. 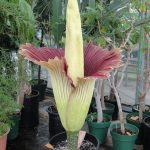 In contrast to rafflesia,  the titan arum flower has cream color on the outside and it grows tall vertically. The crown has purplish red color, trumpet-like shape, and it grows soaring to the sky.

Unlike rafflesia that can not grow in other areas, titan arum can be cultivated. Rafflesia is a parasite for vines meanwhile titan arum is not parasite. This flower undergoes two phases in life that goes repetitively which is vegetative and generative phases.

In the vegetative phase, a single stem and a papaya tree-like leaf appears. The new flower  can grow when the tuber has a weight of at least 4 kg. If the food reserve in the tubers is less or has not reached 4 kg weight, then the wilted tree will be replaced by a new tree. 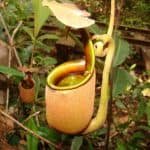 This flower looks like a pocket that is why this flower is named after kantong semar, kantong means pocket or pouch in English.

Different with the other flowers, kantong semar is a carnivore and it catches insects by putting the nectar gland  on the lid of the pouch. The insects’ nutrients that trapped will be absorbed by the plant.

This flower can be found in Southeast Asia region especially Indonesia. When the leaf is young, the predator bag on Nepenthes is closed and the Nepenthes is open when it gets mature. Nephentes is closing its carnivorous bag when it is digesting its prey. 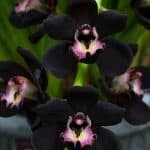 One of Indonesian orchids which is popular in the world is black orchid (Coelogyne pandurata). Black orchid can be found only in Kalimantan and Papua regions.

This orchid usually grown in trees or on rocks. Named the black orchid because this orchid has a black tongue (labellum) with a few lines of green and hairy. The sepal and petal are light green colored (for Kalimantan black orchid). The flowers are quite fragrant and usually bloom in March to June.

This is a rare orchid flower comes from Maluku. This orchid is named as Larat Orchid because it was found in Larat island in Maluku. The international world known this flower under the name of cooktown orchid. Cooktown orchid represents the identity of Maluku province, it has a stem with small base and the center is enlarged and the tip is smaller.

This orchid grows well in hot areas, at an altitude between 0 – 150 m above sea level. The population of this orchid is getting rare therefore the local government is making many efforts to conservate and protect this flower. 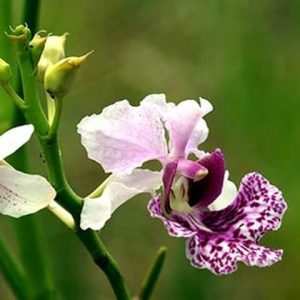 Orchid pencils have beautiful and charming colors, this flower is even more special because it has durable freshness up to 22 days. This flower is one of the Indonesian flowers which can attract the British people. It was nominated as The Queen of Orchid and got the First Class Certificate.

Discovered in Labuan Kalimantan, this flower is named after a famous botanical expert Papillionanthe hookeriana. The root of the pencil orchid has the air, round-shaped roots extending out of the stem book as much as one or more and it is colored dull white and light green.

Those are some information about beautiful flowers in Indonesia which is getting rare and highly protected by the local government. Do not forget to share this article with other because sharing is caring! ^^