15 Famous Plants in Indonesia (#3 is Exotic) 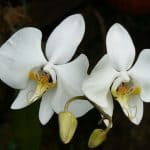 Anggrek bulan or puspa pesonais found for the first time in Maluku but now you can find this flower in Ambon, Java, Kalimantan, Sulawesi, and Irian.

There are a high demand for anggrek flower either as ornamental flower or decoration in foreign countries so this flower cotributes a lot to increase the devisa. The characteristic of this flower is a wide white flower petals however now the colors are varied due to hybridization.

Anggrek bulan is an epiphytes because it is sticking to the stem or branch. Then, you may also want to see Indonesian National Flower for further information. 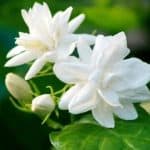 Jasmine flower is well known as puspa bangsa or the national symbol. This flower is useful as an important in religious activities or tradition in either Indonesia or in foreign countries. Jasmine is very attractive even though it is simple, it has a good smell, and the color is white.

On the other hand, This flower symbolizes purity, a simple but humble character, gentle, comfort, and peace. Therefore jasmine reflects Indonesian people’s characters a lot, people who are modest and has a good character.

Indonesian jasmine is very popular in the global wold and we need to be proud of it. Read more about Medicinal Plants of Indonesia 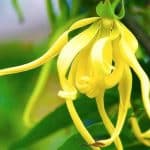 Cananga Odorata is a fragrant flower originated from Maluku and now has been spreading in all over Indonesia. Ylang flower is a flora identity for North Sumatera province. Indonesia is one of the ylang flower oil exporter which is named Java Cananga Oil, this flower is distilled for fragrance industry, soap and cosmetic, as well as pharmacy and food & beverage.

The oil is exported to India,  Singapore, China, France, Germany, England, and United States. Meanwhile the biggest ylang plantations is Blitar, Boyolali, Magelangm Banten, and some regions in East Java. Don’t forget to read more about how many Native Plants of Indonesia 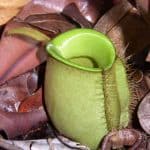 Actually this flower is not only in Indonesia but Tiongkok, Indochina, Philippines, Madagascar, New Caledonia, India, and Sri Lanka. Most of the tropical pitcher plant species originated from Sumatera and Kalimantan.

Meanwhile, different with other flowers, this flower is a carnivore, it eats insects, pacet, and frogs. How does this flower attract its prey? There is vines that is modified to form a pocket, that pocket is used to trap its victim.

Unfortunately this plantation is getting rare due to the forest diversion into palm tree plantations so there are no enough space for this flower to live. 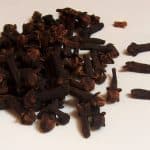 Clove is a plant which triggered Europeans coming to Indonesia in the past, it grows mostly in Maluku. There are a lot of benefits from clove; a dry clove flower stalk is widely used as cooking ingredient, medical world also use this plant because it has anesthetic and antimicrobial characteristic, and also as an important material to make cigarette.

The local tradition in Maluku obligated for parents to plant a clove plantation when they have a newborn baby in the past. Therefore the Maluku people really take a good care of the clove plant well. Maybe you want to read more about Spices in Indonesia. 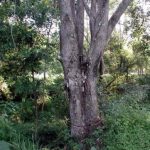 This is a wooden tree and camphor is taken from the middle part of this tree. This tree can grow tall with height more than 60 m, the tree’s skin is brown but it is reddish inside, and this tree has a very distinctive aroma.

Do you know camphor? Camphor is made by cutting the middle part of this plant into small piece, boil it then those small pieces need to be distilled. The chrystalized camphor becomes the main ingredient to be processed in the factory.

This endemic plant is also critically endangered because the the plants are getting rare. 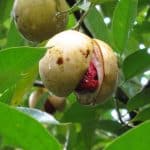 This plant is originated from Banda, Maluku. This plant was very popular even since the Romans era as an important and expensive commodity.

Furthermore, Pala is a dioecious so it is both a male and female tree, the leaf’s shape is elips, the fruit looks like lemon and it has a distinctive smell.

That is why people said that you can smell pala in all over Banda region so the international world knows Banda island as Banda Nutmeg. 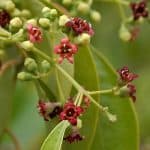 This plant is the pride of East Nusa Tenggara province, it can produces sandalwood and cendana oil. The wood is used as spices, incense, perfume, and keris (ceremonial knife).

In addition, Cendana is actually a parasitic plant because it could not support itself from the start so it needs host tree to support its growth, this is why cendana is quite hard to be cultivated.

The fragrant cendana wood or Santalum Album is very rare and the price is very expensive. Sandalwood is believed to be an alternative to gets closer to God. 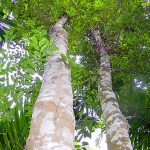 This wood is very famous in perfume industry because it really smell good. Gaharu tree is considered as the most expensive woods in the world. The popularity is no joke because several countries such as Saudi Arabic, Qatar, Chinese, Korea. Japan, United States, and Singapore are the importer of gaharu woods.

The reasons why gaharu is very popular is because it has some benefits such as for perfume, accessories, a cure for a special illness, anti-depresan, and a composition for other cosmetics.

This tree is an endangered species due to the overflowing demands in the trading world. 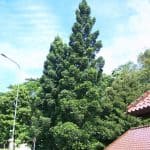 Agathis Labillarden is originated from Papua as a plant which has high economical value. It’s height can reach approximately 60 m, dammar gum is usually being used in industrial activity; as an ingredient to produce matches, plastic, plaster, varnish, lacquers.

Furthermore, Damar is recognized as native plants of Indonesia. It has been spreading aroung Sulawesi Island, Maluku, as well as Philipines. However, nowadays, This kind of plant also cultivated in Java Island Areas.

Meanwhile, it grows in lowland tropical rainforest. Then it raise up to 1,200 meters above sea level. You may want to read about Rice Cultivation in Indonesia

Those are several Indonesian endemic plantation, most of them are endangered to cease due to forest diversion. Therefore we need to protect the remaining species so we can get the benefits from the mentioned flora in the future.

10 Fascinating Things to Learn in Bali