Home » Fauna » 17 Facts about Coral Reefs in Indonesia (#9 is Heartbreaking!)

17 Facts about Coral Reefs in Indonesia (#9 is Heartbreaking!) 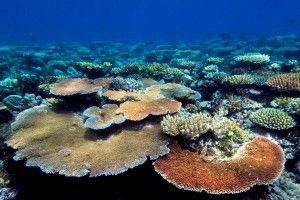 Coral reef can be said as the most diverse and colorful ecosystem in the world. Coral reef is the home to the beautiful corals and mesmerizing sea creatures. As well as Indonesian coral reef.

From the microscopic plankton to small fishes, sea turtles, sea mammals, and that is only to mention a few. 70% of Indonesia’s area is covered by water.

That is more than half! So its no question that Indonesia is home to one of the best coral reefs in the world. Read this 17 Facts about Coral Reefs in Indonesia to understand more about the underwater beauty:

This is one of the most common misconception of corals. Corals are actually animals, not plants. They may seem like a plant (or maybe some of you thought corals are rocks) because they don’t have any significant movement, but corals really are animals. They are related to jellyfishes. You may want to read about Popular Coral Reefs in Indonesia

Indonesia has over 85.000 km2 of area covered with coral reef, that is estimated to be 18% of the world’s total. Indonesia is the home to 750 species of corals, beating the famous Carribean islands and the Great Barrier Reef Marine Park in Australia that only have around 400 species. The Raja Ampat, located in East Indonesia, alone has over 500 species, 75% of the world’s known coral species. You can find corals with various color, sizes, and shape here in Indonesia. You may want to read about Dangerous Animals in Indonesia

The Coral Triangle is an area in the tropical water that includes Malaysia, Philipines, Indonesia, Timor Leste, Solomon Islands, Papua Nugini that is known to be the home of the world’s corals. It has more than half of all the species known to humans up until now. Indonesia contributes the largest area in the triangle.

Coral reefs are known to be habitat of sea creatures. Sea creatures can find shelter and food in the reef. As the most diverse coral reef in the world, Indonesia is home to more than 2.500 fish species, 2.500 molluscs, 1.500 crustaceans and that is just a few! From every shape and sizes of creatures, you can find in the beautiful coral reef of Indonesia. You may want to read about Native Animals in Indonesia

Coral reef is one of the most important ecosystems in nature. It has a very important role to play. Coral reef protects the shore, home of most sea creatures, controls the stability of the world’s temprature, and not to mention the role its playing for the social-economic sector. The coral reef condition affects the fisheries and tourism of Indonesia.

Coral reef reduces global warming by absorbing the CO2 in the air. It also helps to stabilize the world’s temperature. The existences of coral reefs are really important to keep the sustainability of ocean or sea ecosytems, especially in Indonesia.

Raja Ampat considered as a paradise of coral reefs. The live coral covers up to 90% of the sea floor. It is where you can find the colorful corals and fishes as you may see on the movies. The reefs are mostly in great condition. With the clear blue water, it is truly a paradise underwater.

Coral reefs across the planet is currently in an alarming condition, including in Indonesia. Less than 7% of the reef is in a prime condition, about 20% is categorized as good, and over 30% is categorized as damaged. The reef’s condiition is affected by both natural factors, such as temperature, salinity, water current, and also by human factors. You may want to read about  Endangered Animals in Indonesia

In mid March 2017, a cruise ship crashed into one of the world’s most beautiful coral reefs in Raja Ampat, Papua. Nearly 13.000 m2 of what was once said to be one of the best diving areas was destroyed. The damage causes a huge shift in the coral reef ecosystem of the area.

One of the human activities that cause a huge damage to the reef is the use of bombs by fishermen to catch fish. Bombs are used because it becomes easier to catch a huge amount of fish in a short time. But it causes big damage to the reef. The case of bombing was common to be found all across the country, but it is now reducing with the help of education to the fishermen.

Yes! Tourists have a huge impact to the health of coral reef. By touching or stepping on the corals, breaking the corals, and throwing trash (especially plastic) to the water, can directly damage the health of coral reef. It is important for tourists to know about this, especially when Indonesia’s coral reef is one of the country’s best tourism spots. You may want to read about  Characteristics of Tourism in Indonesia

Coral re-plantation is one of the methods to restore the damaged coral reef area. It is done by re-planting a live coral to a suitable substrate. This method has been done in several places of Indonesia including Seribu and Karimunjawa Archipelago.

Indonesia is on the list for the best dive spots in the world! Divers can see the breathtaking view of the corals, beautiful colorful fishes, and encounter various other sea creatures as well.

The health of coral reef is directly affecting the abundance of fish in the seas, as they are home of the fish. If the reef is unhealthy, there will be less fish and that will decrease the income for fishermen.

Coral reef is very important to Indonesia’s ecology and tourism. It has to be protected not only by the government or related stake holders, but by everyone. Education is one of the earliest ways to start protecting the coral reef.

Then, here i give you some information about coral reefs from Sumbawa Island, Indonesia, with their stunning beauty. Check this out.

Seeing this beauty underwater is one of the things that should be on your bucket list! Come visit and witness Indonesia’s coral reef with your own two eyes. But remember to be a good tourist and protect the coral reef.