Indonesia is an archipelago with a large area. Because the region is separated by the ocean and strait, Indonesia has a very diverse culture. 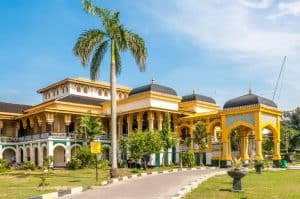 Maimun Palace is officially the most beautiful building in Medan, North Sumatra.

The palace is located in the area of ​​Jl. Brigadier General Katamso was completed around 1888 and is a legacy of Sultan Deli Makmun Al Rasyid Perkasa Alamsyah.

This yellow-dominated building is a typical Malay color. Its unique architectural construction is the main attraction of the Palace of Maimun.

The influence of European culture is also still strongly attached to this building, such as the design of the hall or the living room, windows, doors and inscriptions in front of the stairs with Latin letters in Dutch. 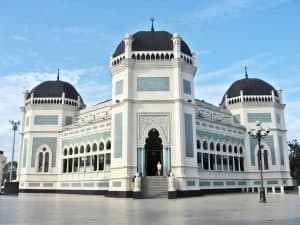 Medan Raya Mosque was built not far from the Maimun Palace.

It is a building that is also a trail of the Deli Sultanate. In 1906 when this mosque was completed, during the reign of Sultan Makmun Al Rasyid, this mosque was still functioning as it should, namely as a place of worship for Muslims in Medan.

The dome that was flat and decorated with a crescent at its peak, represented the Moorish style it embraced.

Like most other mosques, towers that stand and soar into the sky seem to add to the grandeur and elegance of this mosque. These oil paintings in the form of flowers and plants adorn the walls, ceilings and sturdy poles inside the mosque also show the beauty of the aesthetic art of this mosque. 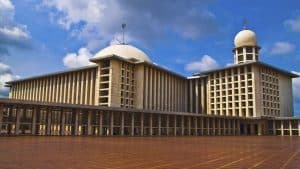 Istiqlal Mosque established by Ir. This Soekarno is one of the historic heritage buildings in 1978 which became a Muslim house of worship and has long been one of the famous buildings in Jakarta.

Istiqlal Mosque is the work of an Indonesian architect named F. Silaban.

The Istiqlal Mosque has a giant white dome which looks like a ball split in two. Like other mosques in the world, mosques that have international modern architectural styles are equipped with towers that reach the number of verses found in the Qur’an. A giant drum is also a unique plus this mosque with a large size, was once crowned the largest drum in Indonesia. 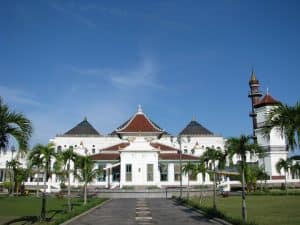 In the cool city of Bandung, we can find buildings built in the era of Dutch colonialism, namely Gedung Sate.

The building became one of the attractions of the visitors of the Flower City.

The name “Gedung Sate” itself appears in the city of Bandung because the building ornaments look like skewers on the top of the main tower. 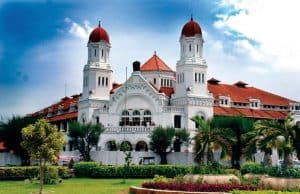 The building which means “thousand doors” is actually not the real name given to this building. The name is legalized because of the many doors in the ancient building.

In the past, Lawang Sewu which had an art deco art line was a Dutch-owned railway company, NV Nederlandsch Indische Spoorweg Mastshappij and became one of the best construction works owned by architect Prof. Jacob K. Klinkhamer and B.J. Oudang.

The Semarang City Government also established Lawang Sewu as one of the buildings under protection because it was a witness of Indonesian history when the 5-day war in Semarang erupted, between the Youth Railroad against the competai and Kido Buati, Japan.

Although designed by European architects, the architect affixed with a slight touch of Chinese ornaments on the face of the mosque.

We can see this from the limestone arches and ornament ornaments from China on a number of roof buildings.

The combination of these two cultures is characteristic of the Palembang Grand Mosque and attracts the attention of many tourists in awe. This acculturation and integration coexist and still complement each other. 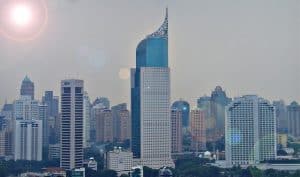 For those of you who live in Jakarta or often visit this city, they are certainly familiar with this unique domed building.

You could say, this building is one of the iconic landmarks because it has stood tall for two decades.

In that time period this building was able to survive in the first position as the tallest building in Indonesia, until finally the title was successfully won by Gama Tower. Read also Historical building in Bali Indonesia. 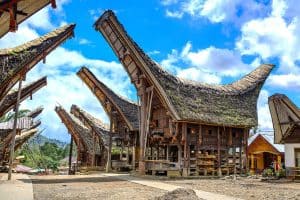 This building which is also a traditional house is indeed not the work of famous modern-day architects who master various kinds of theories and ideas.

However, it is the creation of a work created by a group of Tana Toraja people in South Sulawesi.

Tongkonan has a unique characteristic that is made from wood, bamboo roof structure with black palm fiber and there is an arch-shaped part like a boat facedown.

In addition, the walls of the house that come from wood, are also decorated with various Toraja carvings. Another specialty that is most visible from Tongkonan is the buffalo head along with its horns that are beautifully circular and arranged at a main gate at the door of the house. 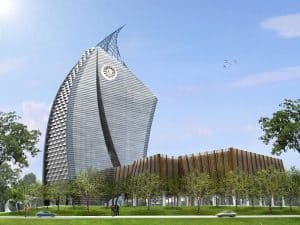 Yu Sing is an Indonesian architect from Bandung who is famous for his ability to play with bold recycled materials and the concept of environmentally friendly buildings and homes.

One of the magnificent and best works of this Indonesian architect is the Phinisi Tower UNM.

Through Yu Sing’s work, you can see a contemporary style that is always synonymous with the designs he made. You will fallen for its awesome architecture. 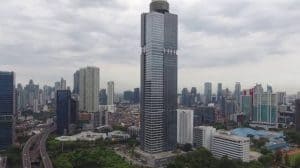 Here he is a successful building bearing the title of the highest skyscraper in Indonesia.

This building is also known as Cemindo Tower and has just been officially completed in 2016 after going through a 5-year work process. Gama Tower is located on Jalan HR. Rasuna Said, Jakarta.

This building has 63 floors, and will include luxury offices, hotels and restaurants. Gama Tower is also ranked 64th for the highest building in Asia and ranked 126th in the world. 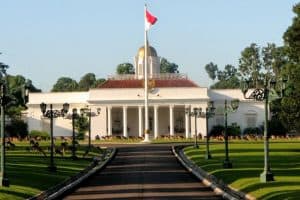 Bogor Palace deserves to be recognized as having the architecture of charming historic buildings in Indonesia. Initially the Bogor Palace was a 3-story building designated as a vacation home.

Only since 1950, this building was inaugurated as the Indonesian Presidential Palace.

The 15 Types of Coffee in Bali You Can Get