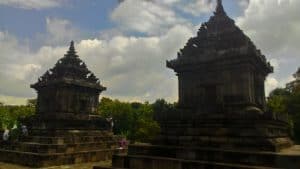 People know that Yogyakarta is a heaven of temples. So many ancient world knowledge and information from ancient Indonesia can be transferred through time until now thanks to temples in Yogyakarta. From Prambanan temple to Borobudur temple, those site gives us imagination of how the life of kingdoms and empire works in the past.

Those two temple are the main attraction in Yogyakarta. Many tourists are attracted to its architectural design and its philosophy. Other than that, Yogyakarta has also various cultural events that can please every tourists who come.

However, there are many hideous temple that has beautiful architectural design and deep historical connection to what happens in the past. They also offer different experience rather than visiting Prambanan temple or Borobudur temple. Here are beautiful hidden gem temple in Yogyakarta that can be your alternative visit in Yogyakarta

This temple is located in Candisari, Bokoharjo, Prambanan. This temple gets its name because inside the temple, there’s a statue that’s similar to the shape of Barong (holy lion from Balinese ancient tale). There’s also different name to call this temple that’s Temple of Sari Suragedug according to inscription of Ratu Boko (856 C) in Sanskrit language and written in ancient Javanese alphabet.

There’s not many information regarding this temple. However, this little temple shows us that even in the small village, there’s remains from ancient world of Indonesia. It is possible that this little temple’s purpose is only for resting place or holy place to pray.

After Temple of Sari, there’s Temple of Sambisari that’s located in Sambisari village, Kalasan, Yogyakarta. From the downtown, it’s approximately 15 kilometres to north east. This temple is the leftover from Hindu kingdom was built around the beginning of 9th century by Rakai Garung, a king from Hindu Mataram Kingdom and Wangsa Syailendra (association of kings).

This temple was found in 1966 by a farmer and was opened for public by the government in 1986 using the name of the village. This temple is also located a few meter below the surface because of it’s buried by dust from volcano explosion in the beginning of 11th century (approximately 1006) due to its high amount of Vulcan material around the temple.

The complex of Temple of Kalasan is located in Kalibening village, Sleman, Yogyakarta. In the inscription of Kalasan, this temple is also called Temple of Kalibening, the same name as its village. From the downtown, it’s approximately 16 kilometres to the east.

This is also a cultural heritage site as Buddhist temple in Indonesia. This temple has 52 stupas in the south side along the road. At first, it was only one temple that’s found, after archaeologist did more digging, they discover many supporting temple around the main temple.

Candi Ijo is located near Candi Ratu Boko (Temple of King of Boko), approximately 4 kilometres in south east or 18 kilometres to east from downtown. This temple gets its name because it was built in a hill that’s called Bukit Ijo or Gumuk Ijo (Green Hill). To associate the temple with its surrounding, local people call it Candi Ijo.

The village Ijo was first mentioned in Inscription of Poh from 10th century (approximately 906 C). In the inscription, there was a story about a man that join a ceremony that comes from Wuang Hijau Village. It’s probably from that story this temple gets the name ‘green’ as most of its evidence has linked it to the word ‘Ijo (green)’.

The complex of Candi Ratu Boko is an ancient site that consists of the ruins from ancient temples. It’s located approximately 3kms in the south of Temple of Prambanan. Ratu Boko had been around since 8th century in the era of King Rakai Panangkaran from Medang Kingdom (Mataram Hindu Empire).

Most of the archaeologist believe that from its structure, this temple was used to be a palace. The name Ratu Boko was born from urban legend that Ratu Boko (in Javanese language, it’s the King of Heron) is the father of Roro Jonggrang (a princess who has the connection with the establishment of temple of Prambanan).

What makes it interesting is it was built in 8th to 9th century when Mataram Hindu Empire was around using red rock (a building material made from clay). However, this temple is little hideous as it’s buried by grass and trees.

However, there are many other attractive site you can also visit surround Red Temple, such as Temple of Banyunibo and Temple of Barong. If you’re confused with the location, this temple is located near the Adisucipto international airport.

Candi Mendut was established in the government of King Indra from Syailendra Dynasty in the Karangtengah inscription in 9th century (824 C). This temple is located in Mendut Village, Magelang, Central Java, approximately 38 kilometres to west north from Yogyakarta.

Although this temple is located in Magelang, people still considered it as top destination when visiting Yogyakarta since the two city is located next to each other.

Since this temple is a Buddhist temple, you will find many Buddhist symbolism in the wall such as God Gandarwa, angels, fairy, and some holy animals in Buddhist belief like monkey and Garuda.

This temple is still included in the complex of Prambanan Temple alongside Ratu Boko. So, if you visit Prambanan, make sure you also visit this temple too.

This temple is located in Condong Catur, Sleman, Yogyakarta, 11 kilometres from downtown. The first discovery from this temple was a statue of Ganesha in 1936, then archaeologist started to do their work from 1937 to 1939.

The temple isn’t as big as other famous temple but it adds mark of the Buddhist and Hindu era in ancient Indonesia.

Those are some beautiful hideous temple that you can find in Yogyakarta. Yogyakarta is not only about Borobudur and Prambanan, but also other temple that’s important as well. So, if you visit Yogyakarta, don’t forget to land your feet in one of these beautiful temples.

10 Beautiful Indonesian Traditional Dance You Should Know From East Java