10 Beautiful Indonesian Traditional Dance You Should Know From East Java 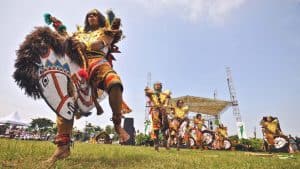 East Java is one of the most populated region in Indonesia. With Javanese tribe dominating the region, the lifestyle and cultural practice are heavily influenced by Javanese tradition. From the language used between old and young people to clothes wore, Javanese people tends to live with tight rule and respect toward each other.

Among those cultural practice, traditional dance is one of the most important thing to be preserved among Javanese society. Each city in East Java region has their own traditional dance practiced by both men and women. Most of them has been successfully promoted itself to international scene and it’s a great thing if we highlights some of these beautiful dances coming from East Java.

One of the most famous traditional dance in East Java. It’s practiced in more than 43 cities here. Each Jaranan dance has its different technique and movement. Some groups might combine it with supernatural element to make it more interesting.

This dance basically consists of group of men dancing using dance properties such as horse toys, laces, and a costume. The movement usually tends to be fast with upbeat tempo movement. There are many type of Jaranan in East Java such as Jaranan Buto, Jaran Kepang, Jaran Senterewe, Jaran Bodhag, and other interesting forms.

This dance usually depicts masculine life in Javanese society using horse and lace as a symbol of masculine men.

Reog is as famous as Jaranan in East Java. However, it gets more recognition nationally and internationally than Jaranan. It is usually performed by 6-8 men and women. This dance tells a story, therefore it takes very long time to finish the dance.

According to history, this dance was established since ancient time in Indonesia by Prabu Kelana Sewandana who seeks for love life. Then he began his journey accompanied by his servant, Bujangganong until in later time, he met Princess Dewi Sanggalangit, the Princess from Kediri Kingdom. She wants to be Sewandana’s wife in one condition: The Prabu needs to create a theatrical dance performance. Thus, this dance was born.

Bedoyo Wulandaru is a traditional dance from Banyuwangi, East Java. This dance’s purpose is to welcome important guest form outside Banyuwangi. It’s also a sign of their happiness to receive a guest. According to historian, this dance has been around since ancient Indonesia, too. People of Blambangan (ancient Banyuwangi) often shows this dance whenever Mighty King Hayam Wuruk and his Holy Servant Gadjah Mada.

Bedoyo Wulandaru is named after Javanese language. Bedoyo means woman, since the one who performs this dance is women. Wulandaru is divided in to two words, wulan and ndaru. Wulan means moon or the light in the dark and ndaru means falling stars or sign of luck. As this dance has purpose to welcome guest, Blambangan then refers every guest as lucky charm for its society.

This dance has similar spirit to Jaranan but using different animal. Bantengan uses banteng (bull) as its icon of dance. This dance grows popularly in Malang and Mojokerto. This depicts ancient society who lives in tolerance and unity. This unity is depicted in Anjang Sana Sini festival where each Bantengan group visits each other to perform the dance.

Bantengan is danced by several men (usually three) in one costume. One holds the head, one becomes the body, and another becomes the foot. This dance is similar to Jaranan in terms of performance. It mixes dance movement, traditional poem and music, and also supernatural elements.

This dance is also very popular in Banyuwangi. In fact, this is the icon of Banyuwangi. This dance has purpose to celebrate the harvest season. The word Gandrung is believed to be a nickname of Dewi Sri, Javanese Ancient Goddess of Harvest and Prosperity. That’s why this dance is performed by women.

Usually Banyuwangi people holds this dance in the harvest festival, where everyone goes on the street and hundreds of women will wear their Gandrung costume and start to perform their dance. This dance has been an icon of Banyuwangi Tourism since 2000. That’s why Banyuwangi is also known as the city of Gandrung.

Remo is very popular traditional dance in East Java, especially Surabaya. Remo is a welcoming type dance which characterizes dynamic life of East Javanese society. This dance shows the courage of young knight when he fight in a battle. The masculine movement is very tight in this dance and is actually needed. This dance has been popular since 1990 and it keeps growing nowadays.

This unique dance has the same concept as Reog Ponorogo, but using less attributes and accessories. It tells a story about Calon Arang. In this dance, Calon Arang is depicted as wicked woman who curses everyone because no woman wants to marry her son.

However, this dance needs a lot of people to play certain character like King Airlangga, Ratna Manggali, Cleric Baradah, Daha, and Calon Arang. They also use specific costume to represent their character. This dance is divided in to three stages, the condition of society of Daha, the rising conflict, and the resolution by cleric.

This dance from Madura is one of the most popular dance in national and international level. Moreover, this dance has been giving Indonesia many recognition in International scene. Its purpose to throw away bad lucks and prevent horrible thing happens in our live. Muang itself has meaning to throw and Sangkal means bad luck.

Muang Sangkal was first introduced in 1972 in Sumenep by a local artist Taufikurrachman. This is now the icon of Madura and making Indonesia more famous in international scene due to this dance international presence.

This dance is pretty unique because it’s performed by a number of women using a male costume. It’s also accompanied by percussion instrument influenced by Arabic style. The name Glipang is derived from a word Gholiban in Arabian language which means a habit.

This dance depicts the condition of colonialization era in Indonesia. Created by a local people who was abused by the colonial government, he altered his feeling in to an art performance. Then it’s bequeathed for generations and created Glipang dance that we know today.

Warok is a dance part of Reog. Reog and Warog is inseparable since they are a structure. A Reog without Warog performance doesn’t feel like Reog. It depicts a number of knights that holds justice and righteous value and also depicts good vs evil. Old Reog is the wiser one, teaching the young Warog about life value while the younger Reog is a student who seeks knowledge and training before going to battle.

Those are some of the famous traditional dance in East Java. These dances show that Indonesia is very rich in its cultural art. This is only a brief list from a small part of Indonesia and it isn’t yet complete. Moreover, each dance holds philosophical value and message for younger generation, either being grateful, prioritizing the communal interest before individual interest, or respecting and learning the roots of or society through history.

7 Amazing things To Do In Gili Ketapang (worth to try!)