The History of Flores, Indonesia 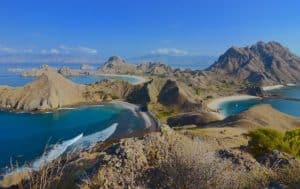 Flores Island is one of the islands located in eastern Indonesia region, precisely in East Nusa Tenggara (NTT) province. The beauty of the island of Flores itself is already famous to the entire world, is evidenced by the many foreign tourists who come to enjoy the exoticism of the island of Flores. Flores has 8 districts, and each district has an average tourist attractions.

Flores has actually been known to the world for a long time. It is often become the third tourist attraction after the island of Bali and Lombok Island. Among all the tourism places, the most popular places in Flores are Labuan Bajo and Komodo National Park. Here is the history of Flores Island that you should know.

The name Flores is taken from Portuguese “Copa de Flores” which means “Tanjung Bunga”. This name is given by S.M.Cabot to mention the easternmost region of Flores Island. This name was officially used since 1636 by Dutch East Indies Governor Hendrik Brouwer. The name Flores has been used for nearly four centuries. Through an in-depth study of Orinbao (1969) the original name of Flores Island is Nusa Nipa which means Snake Island.

The history of the Flores community shows that the island is inhabited by various ethnic groups. Each ethnic group occupies a certain area complete with socio-cultural institutions and ideologies that bind members of the community as a whole. In terms of language and culture, ethnicity in Flores is divided into the following:

Around 1666, the Makasar people, the Sultan of Goa, not only controlled the southern Flores of the West, but also the whole of Manggarai. They paid a tribute / tax to Sultan Goa. The sultanate of Goa triumphed in Flores around the year 1613-1640. Goa’s influence appears to be in the bodo dress culture and the termination of Supreme God Mori Kraeng. In the daily terminology, the word Kraeng is worn for the nobles. The term is reminiscent of the title of Kraeng or Daeng from the title of nobility in South Sulawesi.

In 1722, the Sultan of Goa and Bima conferred. The result of the negotiations, Manggarai area handed over to Sultan Bima as dowry. Meanwhile, in Manggarai there was a conflict between Cibal and Todo. Inevitably, a battle erupted in Reok and Rampas Rongot or known as Rongot War, which Cibal won. The conflict between Cibal and Todo, then gave birth to the Weol War I, the Weol War II, and the Customs War (Wudi). The Weol War Victory was on the Cibal side. But in the Weol II and Bea Loli Wars, Cibal suffered defeat. Bima was helping Todo. This fact confirmed the position of Bima in Manggarai, to the influence of the first Dutch expedition of 1850 and the second expedition of 1890 under the leadership of Meerburg. The last expedition in 1905 was under the leadership of H. Christristel.

The Dutch presence in Manggarai led to fierce opposition between the Dutch and the people of Manggarai under Master Amenumpang who held the title of Motang Rua in 1907 and 1908. But before facing the Resistance Motang Rua, the Dutch got a resistance from Kraeng Tampong who eventually killed the Dutch shot and buried in Compang Mano.

Before the first ships arrived, the people Flores lived in villages scattered each tribe with its own social structure and traditions. Some coastal areas are occupied by Makasar and bugis people from South Sulawesi who trade in gold and elephant ivory for cinnamon, cotton and other items. They also often attack the flores for slavery. In the 15th to 16th centuries east flores were ruled by the ternate emperors of Maluku, while the western part was in the hands of the Sumbawa and Sulawesi sultanates.

Around 1570, the Portuguese came to Flores to buy spices. They brought the Catholic culture which is now the main religion of Flores. The capital of the port in that time was the port city of Larantuka. The Portuguese troops, sailors, and merchants married local women so that the population soon mixed up. Their descendants call themselves as Larantuka people. They made a very great influence and control most of the local trade, especially the favorable sandalwood of the timor.

Dutch who arrived after the Portuguese then soon controlled most of Indonesia. They wanted to get rid of the Portuguese well. After a long struggle, the Portuguese were eventually defeated and they sold their remaining territory including Larantuka. Then they moved to East Timor in 1769. The Dutch finally mastered the Flores and expanded their influence elsewhere in Indonesia and established local rules to govern Flores. Only in the 20th century did they dare to increase the profitability of Flores and took over the rules. This was followed by a period of unrest and in 1907 the tribal uprising was suppressed by bloody military operations.

During World War II, Flores were briefly occupied by Japanese from 1942-1945. Indonesia gained independence under the nationalist leader and the first time Soekarno in 1949, Flores became part of the new state. In 1966, after an attempted coup that led to the massacre of thousands of communists by Soeharto’s generals and his troops, Soekarno handed the government over to Soeharto. A military dictatorship for 31 years follows. Under the economic regime of Soeharto-led new order developed, but the movement against oppression and freedom of oppression and corruption rampant.

Those are the long history of Flores island. It might be useful for those who will visit Flores as your destination. You will not only get the natural attractions when visiting there, but also cultural tourism in the form of traditional weave and cultural activities will welcome you with various kinds of Flores culture. It is guaranteed you will not regret your visit there.