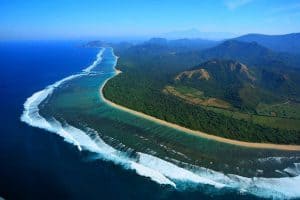 Lombok is a small island located in the eastern part of Indonesia precisely to the east of Bali Island.  The island is more or less likely round shape with a kind of “tail” on the southwest side of the length of approximately 70 km. The island is an area of 4,725 km² (slightly smaller than Bali). The main city on the island is Mataram City.

Since the Dutch colonial era Lombok’s name has become famous among the Dutch invaders because of the beauty of its natural panorama of Lombok once named by Little Sunda Island, but by time flies the name began to disappear and changed into Lombok. Here we would expand the history of Lombok Island before it become as popular as today.

Lombok comes from Sasak language; “Lomboq,” meaning “straight”. So Lombok does not mean there is spicy chili. The name of Lombok in various oral and written stories in lontar leaf  is one of the names of the island of Lombok. Another name that is often called is the island of “Meneng” which means “quiet”. Some other call “Gumi Sasak”, and others would prefer call “Gumi Selaparang” (earth), in accordance with the name of one of the famous kingdoms of Lombok in ancient times, namely the kingdom of Selaparang. Lombok Island since the time of Majapahit kingdom is famous. This is evidenced by the mention in the book Negarakertagama written by Empu Prapanca. Negarakertagama is also found in Lombok.

Told that in ancient times, the kingdom of Old Mataram in Central Java was led by a king of women named Pramudawardhani who married Rakai Pikatan. It is said that the Empress is a master of government, while the husband of war expert. Its power goes west to the island of Sumatra, eastward to the island of Flores. It was then that many of the people of Mataram went sailing eastward through the Java Sea using a curated boat.

The purpose of sailing is not known for certain. Whether to expand power or avoid heavy work, because at that time Borobudur Temple, Prambanan Temple, and Kalasan Temple is being built by the king. So they sailed straight east and landed at a harbor. The port is named Lomboq (straight), to commemorate the long journey. They are straight to the east. Furthermore, Lomboq is now not only the name of the port where the boat landed, but also became the name of Lomboq island which later turned into Lombok. They sailed by a rugged boat called “sak-sak”, and they were called Sak-Sak Yang means people who came by boat.

In the book of “Negara Kertagama”, there reads ‘Lombok Sasak Mirah Adi’. If we examine the sentence separately, Lombok means Straight, Sasak means original person Lombok own, Mirah means Gems, and Adi means Glory. The sentence has the meaning of Lombok people have a straight heart to be a gem of glory.

At that time, on the island of Lombok there had been a kingdom called Kedarao kingdom (presumably now Sembalun and Sambelia). They then established the Lombok kingdom based in Labuhan Lombok now. The kingdom of Lombok grew, grew in five centuries, to be known throughout the archipelago, as a port visited by traders from Tuban, Gresik, Makasar, Banjarmasin, Ternate, Tidore, even Malacca. If coming to Lombok, the Malacca buy rice, tarum, and wooden pork.

The kingdom of Lombok was later defeated by the Majapahit kingdom. The king and his queen ran to the mountains and established a new kingdom named Watuparang which later became known as Selaparang kingdom. When the name Lomboq changed to Lombok, and Sak-Sak’s name changed to Sasak is not known for certain.

The history of Lombok can’t be separated from the alternation of mastery and war that occurs in it both internal conflicts, namely war between kingdoms in Lombok and external that is the control of the kingdom outside the island of Lombok. The development of the Hindu era, Buddha, led to several kingdoms such as Hindu Selaparang, and Bayan. The kingdoms were on their way in the bow by the rulers of the Majapahit kingdom during the Gajah Mada expedition in the XIII century – XIV and the dominion of the Gel – Gel kingdom of Bali in the sixth century.

Between Java, Bali and Lombok have some cultural similarities such as in language and writing. If investigated, their origins are originated from Javanese Hinduism. It can not be separated from the influence of Majapahit kingdom which may send his family members to rule or build the kingdom in Lombok. The influence of Bali was very strong in the culture of Lombok which can not be separated from the expansion made by the kingdom of Bali around the year 1740 in the western island of Lombok in a long time.

In Lombok there was also a lot of acculturation between local culture and the culture of the immigrants. This can be seen from the mixture of genre in the arts. Many genres of traditional performing arts originated or derived from the performing arts tradition of both ethnicities. Sasak and Bali take each other and borrow to create an exciting new genre of art and complement each other.

If we look from the historical aspect, the Sasak people could be from Java, Bali, Makassar and Sumbawa. But it could also to the four ethnic is not Papuk Bloq sasak people, but only give a big influence on the development of the Sasak tribe. Lombok Island which has an area of ​​473,780 hectares is not only save the wealth of nature tourism. If you imagining Lombok Island then your mind wandering into the stretch of exotic, beautiful, and charming Senggigi Beach. The white sandy beach with its little waves is a pity to miss. No wonder if there are many foreign tourists visit this island.

Lombok is in many ways similar to Bali, and in the decade of the 1990s began to be known to foreign tourists. But with the emergence of monetary crisis, the tourism potential is somewhat neglected. Then in early 2000 there were ethnic and inter-religious riots throughout Lombok resulting in large-scale displacement of minorities. They mainly flee to the island of Bali.

Those are the brief history of Lombok Island until it can be the one of the most favorite destinations in the world. No matter what, Lombok is a heaven of nature that you must join to maintain it. Hopefully it would stay that beautiful till whenever.

12 Most Visited Historical Tourism in Indonesia

The History of Flores, Indonesia