Home » History » The History of Geothermal Exploration in Indonesia

The History of Geothermal Exploration in Indonesia 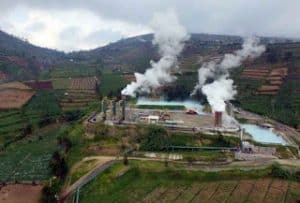 Geothermal energy is a relatively environmentally friendly energy source because it comes from the inner heat of the earth.

In addition to generating electricity, geothermal energy can also be used for heating pumps, toiletries, heating, greenhouses for plants, and industrial processes. Indonesia is the third largest geothermal user for electricity after America and Philippines.

Unfortunately, that potential has not been well developed or only 5%. In fact, Indonesia is targeting an electric power of 7.6 GW in 2025. This utilization of geothermal energy for electricity in Indonesia grew with some stages. Here is the history of geothermal exploration in Indonesia.

The first geothermal development in Italy in 1904 prompted geologists, volcanoes, and Earthlings in the Indies to try to extract geothermal potential in its colonies. Although, in fact, the need for electricity before Indonesia’s independence can be said relatively little.

The first person who originally proposed his idea was J.Z. van Dijk. In the monthly magazine “Koloniale Studiën” (1918) he wrote “Krachtbronnen in Italie”. This HBS teacher in Bandung was focused his attention to the geothermal potential of volcanoes with reference to the experience he has made in Italy.

However, early records of heat sources indicate that geothermal has been observed long before van Dijk wrote. The Proof, Franz Wilhelm Junghuhn wrote his observation of 23 hot springs in Java in 1854.

In February 1926, Volcanologische Onderzoek conducted an exploratory drilling at the Kamojang Crater fumarola field. This is the first attempt to drill the first geothermal exploration in the Indies. This is reinforced by the research results of the Center for Geological Survey of the Dutch East Indies which held a volcano mapping following solfatar field and fumarole in between 1900-1914.

In exploration in 1926, several holes in Kamojang Crater produced geofluidics, namely steam and hot water. Until 1928, five geothermal exploration drilling had been conducted in the crater. However, the drill hole that succeeded in removing steam was just a KMJ-3 well with a depth of 66 meters.

To date the KMJ-3 still produces dry natural vapor with a temperature of 1400 C and a pressure of 2.5 atm.

There is also geothermal exploration conducted by UNESCO Volcano Mission (UNESCO Volcanological Mission) to Indonesia which began in November 1964, continued until January 1965. Exploration is only done in Java and Bali, including Kamojang Crater, and Dieng Mountains. This mission ended in January 1965 due to the release of Indonesia from the United Nations.

The volcanology institutions in Indonesia further completed the observation of geothermal potential in Java, Bali and Lampung in 1968.

Read also: Kinds of Disaster are Common in Indonesia

A significant development in Kamojang occurred in 1974. At that time, Pertamina with PLN developed a 30 MW power plant. An exploration well in depth of 600 meters is made. The well produces steam that can be developed into electrical energy.

The development was completed in 1977. In addition, Pertamina also built a mono block with a total capacity of 0.25 MW in the Kamojang field, which was inaugurated by Mentamben Subroto on November 27, 1978. A 250 kW power turbine was installed to generate electricity using steam from KMJ-6 well.

Kamojang’s total PLTP capacity is currently at 200 MW, consisting of four units, namely PLTP Unit 1 with production of 30 MW, 2 and 3 units of 55 MW for each unit, and PLTP unit 4 of 60 MW. The overall electrical energy generated by PLTP Kamojang is channeled to support the Java-Bali transmission system (interconnection).

There was also the establishment of PLTP Gunung Salak. Mount Salak PLTP is located in Gunung Halimun Salak National Park, West Java. It commenced operations in 1994. The plant, operated jointly by Chevron Geothermal Indonesia and PT Pertamina, is capable of generating 375 MW of electricity.

Lahendong Geothermal Power Plant is located in North Sulawesi. It was first operated in 2004. Operated by PT Pertamina Geothermal Energy (PGE,) it wascapable of producing electricity up to 80 MW. It consists of four units: Lahendong I, Lahendong II, Lahendong III and Lahendong IV.

Turbine damage to PLTP Unit I is due to its operation that has passed 32 years. In fact, the design of turbines for geothermal wells average for 30 years usage. With the reduced capacity of PLTP Unit I, Kamojang geothermal working area actually owned by PT Pertamina Geothermal Energy can only produce 205 MW from the total capacity of five units of the supposed 235 MW.

Geothermal Power Plant (PLTP) or geothermal Kamojang Unit 5 is ready to inaugurate and strengthen the national electricity supply. PLTP location is located in Garut, West Java. PLTP Kamojang Unit 5 is designed with a capacity of 35 MW with an investment value of approximately US $ 104 million or approximately Rp 1.35 trillion. It has been operating commercially by delivering electricity to PT PLN (Persero) on June 29, 2015.

The government is targeting December 2018 that geothermal utilization will increase by 1,858.5 MW. With those additions, the total geothermal power capacity in Indonesia would become 2,023.5 MW.

Those are the history of geothermal exploration in Indonesia. It such a big pride for Indonesians for knowing this country has the great potential of geothermal. Geothermal energy could be an alternative resource to replace the fossil fuels utilization to support electricity.

10 Benefits of Living Near Volcanoes in Indonesia