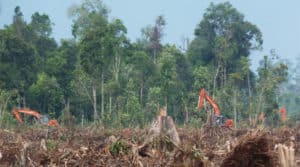 Regarding the wealth of tropical rain forest, Indonesia ranks third after Brazil and the Republic of Congo.

As a contributor of 10 percent of the rain forest biodiversity from around the world, the Indonesian government targets to reduce greenhouse gas emissions 29 percent by 2030.

However, the commitment seems to be confronted by the fact that the high rate of deforestation in Indonesia that reaches 680 thousand ha per year or equivalent to the size of 300 soccer fields per hour. Greenpeace environmental organizations even registered Indonesia to the Guinness World Record in 2008 as the world’s fastest deforestation rate, reaching 1.8 million ha between 2000 and 2005.

From here, the political conflict against neighboring countries will get worse. Moreover, Indonesia’s bilateral relations with Malaysia are in bad shape. Due to deforestation, it will further complicate the political atmosphere between Malaysia and Indonesia.

One of the new regional heads’ challenges is to minimize the risk of climate change impacts by reducing deforestation.

Since the start of the era of decentralization and regional autonomy regimes in Indonesia, the management of natural resources has become heavily dependent on regional heads. The Bupati and the Governor for example have the authority to issue permits in the fields of plantation, mining, and forestry.

Democratization in politics will not really causes problems for nature preservation when local governments adopt clean and good governance principles, have control mechanisms that qualify for check and balances, and are supported by civil society who care about environmental issues.

Since the era of decentralization in Indonesia, the policy of authorizing local officials to issue land transfers as the basis for their arguments. It is confirmed the alleged exchange of interest practices, in which the interests of regional heads to find sources of funding for political benefits in his area then met with the interests of a number of entrepreneurs.

The rate of illegal logging usually occurs rapidly one year before the local government election.

As we know, the easiest and cheapest method of clearing land in a tropical forest dominated by gambut or  peatlands is by burning it. The presence of protection afforded by the local political elite explains why the planters should not be afraid of procedures and legal arrangements in Indonesia.

Local political elites often give them legal impunity as a concession to the support they provide. The entrepreneurs are also indifferent although smoke from fires caused by forest fires by their plantation companies in Indonesia is also seriously affected.

The number of cases of bribery to the local government by oil palm companies would make some parties start growling. The Corruption Eradication Commission (KPK) is slowly beginning to show its strength to capture the head of the region that justifies the deforestation done by the private sector.

Many of them get caught due to a bribery case. Some regional heads certainly took bribes in large numbers. If this is allowed to continue, then the deforestation in Indonesia will be widespread. The number of forest fire would continue occur every year.

Or as a first step, at least the president must immediately moratorium the land concession permit for mining, plantation and industrial plantation in all regions in Indonesia to reduce the impact of further forest destruction. Until a permanent institutional device is found to be a solution to the sustainability of natural resource management in Indonesia, a moratorium on permits must be realized.

The new president at that time, with a focus on strengthening governance and economic development, combines the Ministry of Environment and the Ministry of Forestry. The President also dissolved the REDD + Agency, the National Council on Climate Change and the Development Monitoring Unit (UKP4), which was once the shelter of the REDD+ (Reduction of Emissions from Deforestation and Forest Degradation) task force.

The President then established the Directorate General of Climate Change Mitigation under the new Ministry of Environment and Forestry, taking over the work of the REDD + Agency and the DNPI. The changes made under the new president open opportunities for greater responsibilities and government participation in the REDD + process.

The commitment to eradicating illegal timber through the Timber Legality Verification System (SVLK) begins to bear fruit. There are more than 700 industries have now obtained Certificate of Timber Legality (SLK). The international world also appreciated by approving the signing of the Voluntary Partnership Agreement (VPA) with the European Union (EU) on 30 September 2013 in Brussels.

The development of forestry industry exports based on the issuance of V-legal documents until 23 September 2013 has reached 4.203 billion US dollars or more than Rp46 trillion.

A number of subnational governments are actively making “Zero Deforestation” commitments, and consider it an opportunity to increase investment and green space growth. They see the potential for improving land use planning, smallholder inclusion practices and smallholder production, and they see the need for provincial support regulations to implement sustainable supply practices.

While most of these efforts come from the climate change agenda, it is increasingly leading to support for low-carbon development strategies.