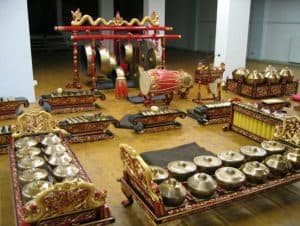 Javanese gamelan can be played as a musical performance or used as accompaniment of dance or performance art such as Wayang Kulit and Ketoprak. As a separate show, Gamelan music is usually combined with the voices of the singers (the male singers called wiraswaradan and the female one called waranggana). Here is a history of Javanese gamelan that you should know.

In East Java’s written sources the group of gamelan ensembles is said to be “tabehan” (the new Javanese ‘tabuh-tabuhan’ or ‘tetabuhan’ meaning anything that beats or sounds with a beating). The word “gamèl” with percussion instruments is a hit instrument (1982). In Javanese there is the word “gèmbèl” which means ‘battering’. In the Balinese language there is the term ‘gambèlan’ which then may be the term ‘gamelan’. The term ‘gamelan’ has been mentioned in relation to music.

Namur in Kediri kingdom (around 13th century AD), a music expert Judith Becker even said that the word ‘gamelan’ comes from the name of a Burmese priest and an iron expert named Gumlao. If Becker’s opinion is true, of course the term ‘gamelan’ is found also in Burma or in some areas of mainland Southeast Asia, but it is not.

Initially, musical instrument gamelan made based on reliefs that exist in Borobudur Temple in the 8th century. In the reliefs of the temple, there are several musical instruments consisting of drums, bamboo flutes, harps, stringed and picked strings, and bells.

It is said that, according to Javanese belief, the gamelan itself was created by Sang Hyang Guru Era Saka, as a god who once controlled all of Java. It was this god who invented the musical instrument gong, which was used to summon the gods. The first gamelan musical instrument created was the “gong”, which was used to summon the Devas. It was also used to deliver a special message. Sang Hyang Guru then recreated some other equipment like two gongs, until finally formed a set of gamelan. Until now, the gamelan sets are well known in the world.

The spread of Islam that since the thirteenth century grew faster and faster in the Indonesian archipelago, mainly due to the efforts of the broadcasters with their Islamic mystical teachings (Sufi), especially will be more pronounced in Kali saga era. The broadcasters became a member of the Islamic mysticism (tariqa) who fled from Bagdad, when the city was invaded by Mongol Man in 1258. The idea of mystic was warmly welcomed in Java, since since the days before the entry of Islam, the Hindu-Buddhist cultural tradition which is found in Java is dominated by mystical elements.

In Kali Kalijaga there was the addition of tones to Gong, as well as the famous Javanese Gamelan song of the era is Ilir – ilir, and Sufistic values ​​will also be felt in Kali saga Kalijaga. The gamelan was used as a process for mildly Islamicizing Java through their culture and spirituality, although there will be syncretism (Islamic fusion with Javanese or Islamic kejawen) done by the Javanese people themselves. Then outside of the wishes of Kalijaga who wanted a culture primarily Java follows the religion or the understanding of Islam, and not the religion or the Islamic understanding that follows the culture.

The gamelan inherited in Sunan Kalijaga era was usually used for ceremonies (e.g. ceremonies to commemorate the maulid of the Prophet), and there was always a requirement to watch the Javanese Gamelan play inherited by sunan Kalijaga, which consists of washing both feet and reciting the syahadat. This habit began to disappear, when the Javanese society had been affected by Islam’s own understanding.

The gamelan was usually played at night, or after the Java community returned from their work during the day, and was not played every Friday night, because it had its own sacredness for the Muslims. There was a belief that Gamelan Sekaten as a royal heirloom also changed hands following who will rule next. Since Majapahit, Demak, Pajang and Mataram, and so many Gamelan Sekaten changed hands from one ruler to another leader, or passed down from generation to generation. However, the journey of history has not ended, because Mataram Hadiningrat itself then also broke into two, in 1755 AD through the agreement Giyanti, or become Surakarta and Yogyakarta.

The treasures including the Sekaten Gamelan were then divided in two. However, it can not be ascertained which of the two Mataram Hadiningrat fractional kingdoms that got Gong Kiai Sekar Delima of Brawijaya V heritage and Gong Kiai Sekati Sunan Kalijaga heritage. The result of the historical research conducted by Depdikbud (Ministry of Education and Culture) in 1991-1992 stated that Gamelan Sekaten must be a pair, each of Mataram Hadiningrat (Surakarta and Yogyakarta) fractions, and make new Gong as their partner (Kiai Nogowilogo and Guntur Sari).

The music of Javanese gamelan in Java itself is called karawitan. Karawitan is a term used to describe the soft music of gamelan. Karawitan art using gamelan instruments is found in the art of dance and sound art of Javanese, which is as follows:

Javanese gamelan art is not only played to accompany the art of sound, dance, and wayang attraction. When there was an official event of the kingdom in the palace, it usually used the strains of gamelan music as accompanist. Especially, if there are members of the palace that married the Javanese tradition. Javanese people also use the gamelan music when holding a wedding reception.

12 Reasons Why Are Elephants Endangered in Indonesia