An Amazing History of Malioboro Yogyakarta 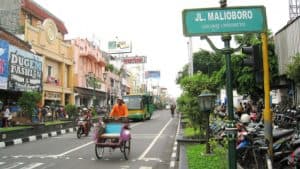 The existence of Malioboro often associated with the three sacred places in Yogya, they are Mount of Merapi, Kraton (Ngayogyakarto Hadiningrat Palace), and the Pantai Selatan (the call name of Javanese people for Indian Ocean). But did you know about the history of Malioboro Yogyakarta?

In the beginning, the Malioboro area is part of the city concept in Java. Malioboro streets laid out as a north-south imaginary axis that correlates with the Keraton to Mount Merapi in the northern and southern seas as a supernatural symbol. In the colonial era (1790-1945), the urban pattern was disrupted by the Dutch who built the Vredeburg castle (1790) at the southern end of Malioboro streets.

In addition to building the fort, the Dutch also built Dutch Club (1822), the Dutch Governor’s Residence (1830), Java Bank, and Post Office to maintain their dominance in Yogyakarta. Rapid development occurred at that time caused by trade between the Dutch and the Chinese. There is also a sub-segment of Jalan Malioboro by Sultan to the people of China. In the end, it is known as the Chinese District.

The “axis” is manifested in the form of a building, Tugu (Pal Putih) in the north, to the south of Margatama (Mangkubumi) and Margamulya (Malioboro), Kraton Yogyakarta, Jl. IN. Panjaitan, ends at Panggung Krapyak. If the starting point (Tugu) is passed to the north will get to Mount Merapi, while if the end point (Panggung Krapyak) forward will reach the Indian Ocean.

The second version, the name of Malioboro was taken from Sanskert language. In Sanskrit, Malioboro means “bouquet of flowers” in because this place was once filled with bouquets whenever the Kraton (palace) carried out a celebration.

In 1912, the British Empire under the leadership of Stamford Raffles attacked the Sultanate of Yogyakarta which was then ruled by Sultan Hamengku Buwono  II.  In order to arise the British troops to conquer the forces of Yogyakarta at that time, Raffles instill the soul and spirit of the British royal hero of the Duke of Malborough.

The Duke of Malborough is the British royal commander who managed to defeat the Spanish and French forces in dozens of battles. Courage and strength of Malborough that is pumped into the British troops. Since then, the people of Yogyakarta are no stranger to the name Malborough. Often Malborough troops pass through an anonymous road to the city center of Resident and Benteng Building, making the Yogyakarta community name the street Malborough street. It was difficult for Javanese people to pronounce the Dutch and English sentence then adjusted to the tongue of Java. Therefore, until now the Javanese people call that street Malioboro Street.

The development at that time was dominated by the Dutch in building facilities to improve their economy and strength. It is closely related to the growth and development of sugarcane plantations, various types of factories, banking, insurance, hospitality, and education. Rapid development also occurred during that period caused by the trade between the Dutch and the Chinese. There is also the Chinatown area near Malioboro.

Starting from the Chinatown which has emerged since Sultan Hamengkubuwono I raised the captain of a Chinese, Tan Jin Sing, in 1755. His Javanese name, Setjodingrat, and lived in Setjodingratan Ndalem (now located east of the Post Office). Since 1916, the southern Malioboro region is known as the Chinatown settlement of Yogyakarta, which is marked by store houses selling groceries, gold and clothing.

This area is increasingly crowded after the Kraton built Pasar Gedhe (now Beringharjo Market), which operated since 1926. Chinatown began to expand northward, to Tugu Station (built in 1887), and Grand Hotel de Yogya (established in 1911, now Garuda Hotel). Malioboro connects the station point to Rusternburg Fortress (now Vredeburg) and Kraton. Shop houses are a common sight along this road. Therefore, culturally, Malioboro space is a combination of two dominant cultures, namely Java and China.

Malioboro Street also has an important role in the struggle for Indonesian independence. On the south side of Malioboro streets, there had been a fierce battle between the homeland fighters against the Dutch colonial troops who wanted to occupy Yogya. The battle then became known as the General Offensive of March 1, 1949, the success of the red and white troops occupied Yogya for six hours and proved to the world that the Indonesian armed forces remained.

Before turning into a crowded street, Malioboro was just a quiet road with acidic trees growing on the right and left. This road is only passed by the people who want to the Royal Palace or the first Indische complex in Jogja such as Loji Besar (Benteng Vredeburg), Loji Kecil (the area next to Gedung Agung), Loji Kebon (Gedung Agung), and Loji Setan.

However, the existence of Pasar Gede or Beringharjo Market on the south side and the presence of Chinese ethnic settlements in Ketandan area are slowly boosting the economy in the region. The Chinese group made Malioboro its business channel, so the trading area initially centered in Beringharjo and Chinatown eventually expanded northward to Tugu Station.

Today Malioboro street is the center of the largest tourist area in Yogyakarta, with a history of Dutch colonial architecture blended with Chinese and contemporary commercial areas. The sidewalks on both sides of the street are crowded with small stalls selling a variety of merchandise.

In the evenings there would be many restaurants. They are called lesehan which operate along the way. The road for many years became a two-way street, but in the 1980s it had been a one-way course, from the railway to the south to the Beringharjo Market. The largest and oldest Dutch hotel, Hotel Garuda, is located at the north end of the road on the East side, adjacent to the railway line. There are also houses of former Dutch-era complex, Prime Minister, Kepatihan which has now become the provincial government office.

Those are the history of Malioboro Yogyakarta. Now you might be amazed with Malioboro. For those who have visited Malioboro, you will feel a half of your heart left in this city. The beauty of Yogyakarta is always charming your heart that wants you for coming back there.

15 Traditional Food in Central Java You Must Try

10 Family Activities in Bandung You Must Try