Indonesia is being situated on the Pacific Ring of Fire or an area with the high possibility of tectonic plate movement. Then, Indonesia has to deal with the repeated danger of volcanic eruptions, earthquakes, floods and tsunamis. On a few incidence during the last 15 years, Indonesia has made global news because of the overwhelming disasters. Moreover there were most horrible volcanoes in Indonesia. As well as the biggest earthquake in Indonesia ever happened.

Disaster in Indonesia caused the deaths of hundreds even thousands human and animal lives and the loss of natural habitat. Moreover, Its occurred a calamity effect on the land area including infrastructure, and thus causing economic chaos.

Here, several destructed disaster in Indonesia ever happened, as follows: 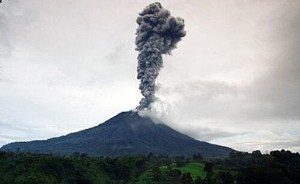 Mount Sinabung in Sumatra has erupted on Sunday, September 15, 2013, spewing ash up to 50 kilometers from the volcano, triggering an exodus of thousands of people living around the volcano.

There was no sign of periodic earthquakes before to the eruption. However, Indonesia’s volcano monitoring agency declared a small plume from the volcano along with a few hundred small earthquakes since mid-August. 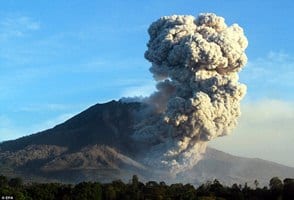 On 1 February 2014, a further eruption happened that spew clouds of hot ash 2 kilometers into the sky and swallowing surrounding villages.

Then, it was claimed that at least 20 people died as a consequence of the eruption, which happened after residents staying more than six kilometers from the mountain.

So, there were a permission to go home because of a low number of recent volcanic activity. Between the dead were a local television journalist and four high-school students along with their mentors, who were coming to the mountain to see the eruptions first hand.

Eight of the victims were members of the Indonesian Christian Student Movement, who died while attempting to save local residents as hot ashes flow down across Mount Sinabung. 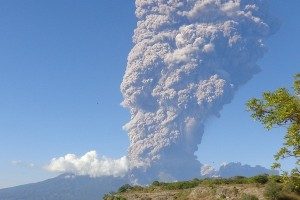 An active volcano complex on the island of Sangeang in the Lesser Sunda Islands, Indonesia erupted on Friday, May 30, 2014. The plume is thought to be 4 km high and spread widely.

The island has zero population, however people used the land for agriculture at the slope of the volcano. However, they have been told to move away from the island before the eruption took place. The government had put the volcano on high alert since June 2013.

There are no victims reported so far. Even though, Residents of Bima and Flores stated that they felt the shock-wave indicating that the eruption is a huge explosive event. 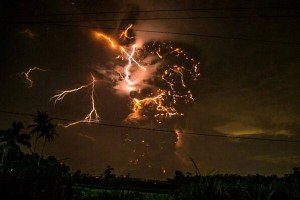 Kelud further erupted on February 13, 2014. The eruption spews volcanic ash sheltering an area of about 550 kilometers in diameter.

Ash fall happened over a heavy part of Java island. The eruption triggering about 77,000 residents to leave their homes.

Three people were recorded dead. It recorded after their home destroyed from the buildup of ashes.

An old man also become a victim from inhaling the ash, The ash also recorded arrived in the western region of Java, where signs of volcanic ash were appearing in Bandung and surroundings area. 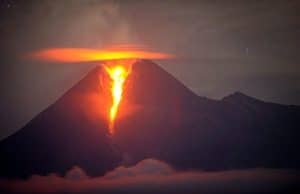 Mount Merapi eruption was said by the government to be the biggest since 1800. Seismic activity near the volcano enhanced from mid-September onward, totaling in several spewing of lava and ashes.

The explosion of Mount Merapi started in October 2010. The Mount Merapi is located in Central Java, that started a sporadically thundering series of the explosion that keeps happening through November.

Huge explosion ashes formed, affecting many ashes spreading down the largely inhabited slopes of the volcano. 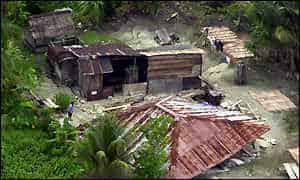 The Enggano earthquake occurred at on June 4 with a magnitude of 8 SR. The incidence took place off the coast of southern Sumatra, Indonesia near Enggano Island.

Over 830 aftershocks triggered the mass exodus of the surrounding area afterward. Heavy damage and landslides populated the Bengkulu area, with minor wounds and damage on Enggano Island.

Moreover, in the village which affected badly, several hundred houses were sighted to be ruined.

Then, the total calamity from the earthquake isn’t much, but the houses are wooden structures so they don’t damage much as they can absorb the quake movement. 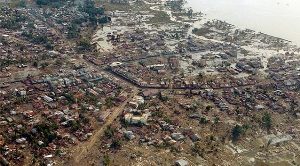 The 2004 Indian Ocean earthquake happened on 26 December. The mega movement of sea produced earthquake was caused when the Indian Plate was collided by the Burma Plate.

Then, it caused a series of devastating tsunamis along the coasts of coastline bordering the Indian Ocean, eliminating 300.000 people in 15 countries. As well as flooding coastal line region with waves up to 35 meters high. It was one of the fatal natural disasters in known history.

On the other hand, Indonesia was the hardest-hit country, followed by Sri Lanka, India, and Thailand. 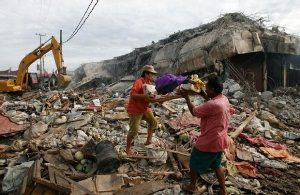 The 2005 Nias–Simeulue earthquake happened on 28 March. The incidence wreaked havoc in the surrounding region, which had been destroyed by the great tsunami caused by the 2004 Indian Ocean earthquake.

However, this earthquake produced a moderately small tsunami that makes limited damage. It was the third most powerful earthquake since 1965 in Indonesia.

With many as 925 people have perished, many of them located on the Nias Island.

Meanwhile, the earthquake went for about three minutes. In the one day after the incidence, there were nine major aftershocks that were recorded, reaching between 6.0 and 7.0.

Although the surrounding of the epicenter to that for the 2004 Indian Ocean earthquake, it broke another segment of the Sunda megathrust and was most likely induced by pressure changes affiliated with that previous incidence. 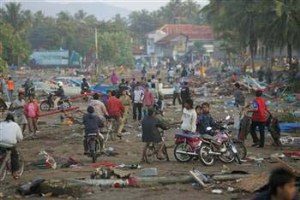 The 2006 Pangandaran earthquake and tsunami happened on July 17 on a huge and heavily populated island in the Indonesian archipelago. The shock had a magnitude of 7.7.

There were no observable effects of the earthquake’s rupturing due to its light to modest strength. The heavy loss of life from the incidence was caused by the tsunami effect, which flooded a 350 km part of the Java coastline.

Moreover, it had been destroyed by the prior 2004 Indian Ocean earthquake and tsunami that was off the coast of Sumatra. 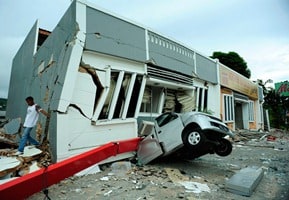 The earthquake happened on September 31, off the coast of Sumatra, Indonesia with a magnitude of 7.7. In total, approximately 135,600 houses were badly destroyed, 65,500 houses have small cracked and 79,500 houses were slightly broken.

An estimated, 251,500 families have been displaced by the earthquake through the total loss of their homes and their income. Government press release has to date confirmed 1,215 dead, 1,314 severely wounded and 1,788 slightly wounded. 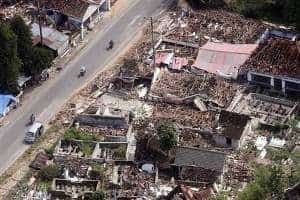 A magnitude 4.1 earthquake struck Yogyakarta city on Wednesday, April 2, 2014. The incidence was felt all over the city.

With many residents stating a powerful ground movement happening for approximately 5 seconds.

No proof of surface rupture, casualties or damage stated so far. The event is located along linear feature thought to be the fault that was broken during the Yogyakarta earthquake in 2006, the Opak fault.

A cluster of Japanese helped by Indonesian scientists toured the area.

Then, it proved the lack of surface cracking and concluded that any observable expression of the fault would likely have been vastly decimated due to the tropical climate.

Then, it have admitted varying locations widely and the preference for the Opak Fault that were recorded by the many seismological institutions. 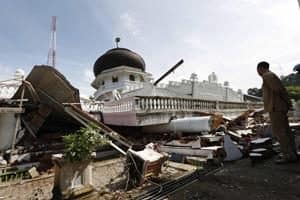 A Magnitude of 6,5 earthquake struck Pidie Jaya, Aceh of Sumatra on Wednesday, December 6, 2016.The earthquake is caused by an unseemingly unknown faultline that stays there waiting to happen.

This new fault indicated to be the branch of the major Sumatra Fault near the northern termination of the fault. The earthquake occurred at dawn while many residents were still in deep sleep and doing morning prayer. Then, thousands of residents ran in the streets as the earthquake happened, with people there stating that many people are yelling and praying as their trauma of the massive earthquake in 2004 were induced.

Moreover, Many believe that the quake was the same to the 2004 quake. Thousands of residents migrated towards the hill, thinking that a tsunami would then ensued. 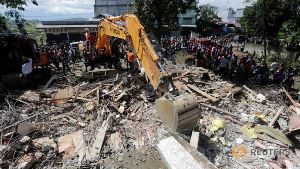 The Aceh earthquake occurred on the Indonesian island of Sumatra with a magnitude of 6.5 in Aceh province on 7 December 2016.

Total victim of the quake reached 110 people died, with at least 1,500 people wounded of the falling debris. It was a massive earthquake in Aceh ever since.

On the other hand, the 2005 Nias–Simeulue earthquake and the strongest in Sumatra since the 2010 Mentawai earthquake and tsunami. The tremors were recorded to be at a depth of 15 km, classified as a powerful earthquake. 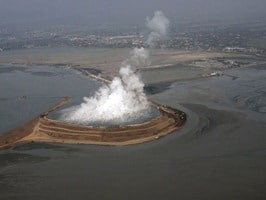 Its recorded as the largest mud volcano in the world. Sole perpetrator for it was attributed to the explosion of a natural gas well drilled by PT Lapindo Brantas.

Although, some rogue scientists and company officials profusely admitted it was caused by a recent earthquake in Jogja.

The Sidoarjo mud flow or Lapindo mud is the direct consequence of an exploding mud volcano in the subdistrict of Porong, Sidoarjo in East Java. Its has been erupting since May 2006. For the scientific researcher, it was an opportunity to witness the transformation of the geological phase towards the making of a mud volcano.

Beforehand, mud volcanologists could only analyze mud volcanoes that happened in the past. Meanwhile, the birth of this incidence was a great disaster for the residents situated there, with the destruction of their home, property, and their income. 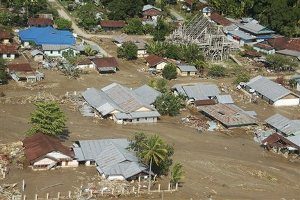 The West Papua floods caused by heavy rains that flooded in a river inundating its edges, triggering landslides.

Therefore, some of the residents have been migrated to the city of Manokwari. Huge amounts of food donation had been sent wrongly to the other town of the flooding.

Despite the mass migration its residents to Manokwari. Officials and NGOs blamed miscommunication for the mishap.

Here is the data from all the remaining earthquake disaster in Indonesia with its more extensive data regarding the total victims and magnitude, as follows:

Indonesia is a country that’s rich in natural resources and full of all kind of mountains. Then, it gives people with so much natural wealth. However, these advantages come at a cost that is Indonesia is always haunted by the prospect of natural disaster that keeps happening.

Then, this is something that can’t be prevented but only mitigated. Thus better cooperation between the government and its people can greatly alleviate any pains and suffering that are caused by this unfortunate disasters.