Home » Socio Cultural » 13 How to Dress in Lombok – Traditional Clothing

13 How to Dress in Lombok – Traditional Clothing 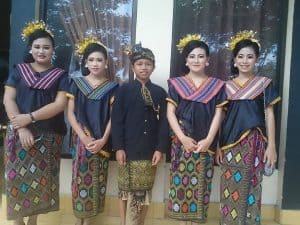 Most Lombok people are part of the Sasak tribe. As with customary clothing in other areas, tribal societies inhabiting the Lombok area of West Nusa Tenggara also have a variety of traditions and cultures that are adapted to the religious rules and customary procedures adopted by the sasak tribe community. One of them is in traditional sasak clothing made, worn and supported and developed by the sasak community.

Therefore, most people of Lombok Sasak wear custom clothes every day. The use of custom clothing is done for activities related to customs with a good procedure Custom Clothing is different from the arts clothing that may wear “sumping”, black glasses, using trinkets that glow golden. Here is the full explanation of how to dress in Lombok.

Sapuk is a crown used as a symbol of respect for God Almighty and keeps the wearer’s mind from dirty and unkind things. At a glance the sapuk form worn by tribal society of Sasak not much different from the headband from Bali. For everyday use the type of sapuk used is in the form of an equilateral triangle, whereas for special rituals such as traditional ceremonies or special rituals usually use sapuk or a perade made of songket material of gold thread.

Umbak is a sling belt made with special ritual in Sasak family.  It is worn by the men of Sasak tribe. The color of Umbak is read and black with 2 – 4 meters length. In the end of the thread there hanging Chinese money (kepeng bolong). Umbak as customary clothing is only used by the customs stakeholders as the community protector. Umbak is also used for the clothing as a symbol of affection and wisdom. Its function is used as a distinction between ordinary people and custom stakeholders, the custom stakeholders use the Umbak Selendang. It shaped like a belt made with special rituals in Sasak family.

Then the Sasak guy uses pegon as a shirt. Pegon is a variation of European suits. Unlike other Sasak clothing made of songket, pegon using a dark ordinary cloth, the possibility of pegon is the result of acculturation with the Javanese tradition. Pegon is used exclusively for traditional ceremonies and nobles of the Sasak tribe. For ordinary people, Sasak men wear a long-sleeved shirt made of light-colored pelung cloth.

As a pants or under clothing, Sasak men use wiron or cute. Wiron made from Java batik with jackfruit jacket motif or black pelung cloth. Its use is like the cloth in Java or Sunda that dangle to the ankle. For wiron use, it is not permitted to use a plain red or white cloth. It can also be used woven fabric with motif tapo kemalo and songket with motif the fiber of penginang. Avoid the use of plain white and red cloth. Wiron / Cute which edges are up to the straight legs of the earth means tawadduk-modest.

For a belt (leang or dodot), they use songket with the motif of golden yarn as a pair of Pegon. The use of leang or dodot is not like a belt but rather serves as an accent, a glimpse of a traditional Malay fashion. For ordinary people, songket cloth used genetically yellow motif, its use wrapped regularly like a belt in general. Leang or dodot serves to slip the keris (curly blade). For large keris, usually it would be tucked in the back. While for the small keris inserted in front. When the men wear Leang or dodok means he has spirit in the work of dedication to the community. While keris means a chivalry-courage in maintaining dignity.

The use of keris is as a complement of traditional clothing Sasak tribe used as a symbol of chivalry and courage in maintaining dignity. In the rule the use of keris as a symbol of custom face must face forward, if reversed then change the meaning of being ready beperang or standby. In its development the use of kris itself can be replaced with a knife or a scaler. The use of keris is not absolute, keris can be replaced with the pemaja or blade of the expression. Lately because keris is a bit rare then it is also possible to insert “pemaja” (a small knife to sharp).

Sasak traditional dress for women is called Hull. That is a black sleeveless dress with a collar in the shape of a “V” and a bit of decoration in the gigir shirt. This outfit uses pelung fabric. Plus a dangling scarf on the right shoulder patterned genre yeast which is a typical type of songket sasak cloth, combined with an anteng belt is wrapped and the ends are tufted dumped at the left waist. His subordinates wore long cloths to knees or ankles with embroidered edges of cloth with plaid or triangular patterns.  Traditional Lambung clothing used special Sasak girls to welcome guests and fruits carriers in a mendakin or nyongkol ceremony.

A pair of silver bracelets is added for the Lombok woman’s accessories. Sowang (earrings) round shape made of palm leaves. Hair tied neatly and as an accent tucked flowers and chrysanthemum rose, or can also be bun with model plotet arbor. The use of endit or pending that is in the form of silver chain which functioned as belt, onggar-onggar or ornament of gold flower tucked in section konde, earrings or earrings, and also tribe or ketip made of gold and silver coins formed by brooch and necklace.

Tangkong is clothing as a symbol of elegance can be kebaya clothes of materials with bright or dark colors of the velvet or brocade. Avoid the use of models that show cleavage and transparency. Meanwhile the tongkak is the belt of the long belt wrapped around the waist as a symbol of fertility and devotion.

Lempot is a typical long-patterned shawl / weave that is draped over the left shoulder. It is symbolized as a symbol of affection. While Kereng a songket fabric woven from the waist to the ankles. Kereng functioned as a symbol of modesty and fertility.

Although in reality the headscarf and footwear are not used as the completeness of traditional clothing Sasak tribe but on its development the use of both remain justified. Although only footwear in the form of slippers made of rubber or leather and hijab are modified with the addition of a crown as well as the use of condoms or bun.

The use of footwear is justified even if not originally used. Footwear that can be used in the form of slippers both made of rubber and leather. Lately in women who use veil can still be justified with modifications to add a decorated crown as the use of cotton konde.

It is well known that Sukarara is the largest songket producing center in Lombok. This has become part of the commodity to penetrate the overseas market. Songket weave is a woven fabric made with the technique of adding feed yarns with ornaments of synthetic yarn in gold, silver, and other colors. The decoration is inserted between the warp thread. Sometimes the ornaments can be beads, shells, or coins. You could use this fabric to beautify your outfit when visiting Lombok.

Those are the full description of how to dress in Lombok. While you visit there, it would be nice if you are willing to try those outfits.

The History of Mix Martial Art in Indonesia

Kinds of Monkeys are in Bali You will Find