The Culture of Sundanese – Arts – Clothes 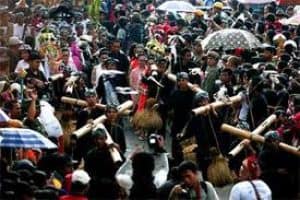 Sundanese is the second largest ethnic group in Indonesia after the Java tribe. Sundanese tribes are spread throughout every Indonesia archipelago and thus plays important role in the development of Indonesia. Almost all Sundanese are Muslim. Only a few are not Muslim, including Baduy people who live in Banten.

However, there are also Catholics, Christians, Hindus, Buddhists. The practices of syncretism and mysticism are still being embraced. Basically, all the life of the Sundanese is aimed at maintaining the balance of the universe.

Magical balance is maintained with traditional ceremonies, while the social balance is maintained by mutual giving. The interesting thing about Sundanese beliefs is the influence of lutean Kutungung, one of their cultural figures, who believe in the existence of a Single God (Guriang Tunggal) who puts a small part of Himself into the world to preserve human life.

The language used by this tribe is Sundanese. Sundanese is a language created and used as a communication tool by the Sundanese, and as a tool for practitioners and supporters of Sundanese culture itself. In addition, Sundanese language is part of the culture that gives a character that is typical as the identity of the Sunda tribe that is different from other tribes in Indonesia.

The traditions inherited from the ancestors to the Sundanese people are still preserved and respected.
Sundanese traditional culture has a strong attraction for tourists who come to the area. Some of the arts and culture that exist in West Java such as:

In the style of dressing, the Sundanese community recognizes some types of traditional clothes based on the function, age, or social level of the wearer. Based on the level of social strata of the user, for example, West Java customs clothing can be divided into 3 types, namely the clothing of commoners, the middle class, and the nobles.

A. Custom Clothes for Commoners 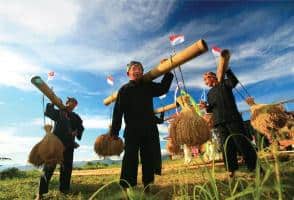 For ordinary people, Sundanese men in the past always wore very simple clothes. They wear long pants or pangsi equipped with leather belts or cloth. As for the upper side, they use a shirt or a salmon shirt equipped with poles crossed on the shoulders so he never loses it in daily life activities.

Then, Sundanese traditional clothing will also be equipped with a head cover that is named rope logen hanjuang nangtung model and footwear in the form of tarumpah that is made from wood

For women, the West Java customs clothing is also worn fairly simple. Equipment such as sinjang kebat (long batik cloth), beubeur (belt), camisole or bra, kebaya clothes, and batik shawl are the main choices. As a complementary makeup, the style of clothing will also be accompanied by a hair ornament that is embroidered with small bun up on the hair, other accessories such as root bracelet, plain ring, round studs, and foot wear in the form of slippers sandals.

B. Traditional Clothes for the Middle Class 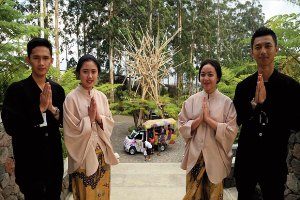 Different classes, different appearance. For those who are considered middle class in the social strata, the use of custom clothing of West Java is devoted to the addition of several trinkets. The men will wear white clothes, batik cloth, sandals, belts, and headbands, they will also wear gold chain watches that hang in their pockets as a fashion clothing

As for the women, West Java customs clothing worn is a variety of colors kebaya as tops, batik fabric as lower clothes, belt, colored shawl, footwear in the form of slippers or clog, and jewelry such as necklaces, bracelets, Earrings, and rings made of silver or gold.

For the nobles, the clothing worn is a symbol of greatness. Therefore, in terms of design, these clothes are seen as the most complex and esthetic clothing of West Java 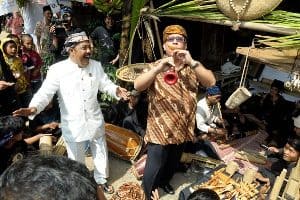 For the noble men, the Sundanese customs they wore consisted of white velvet covered suits embroidered with gold threads seamed along the edges of the sleeves, and long pants with a similar pattern, golden belts with special pattern, a shawl for headgear, and black slippers as footwear.

As for the women, West Java custom clothing worn kebaya white velvet embroidered with gold thread, and footwear in the form of shoes or slippers made of black velvet embroidered beads. Not to mention some jewelry trinkets are also worn like a golden condenser for buns, earrings, rings, brooches, necklaces, bracelets, chain pins, and some other jewelry made of gold with diamonds.

Because it has various types of custom clothing, West Java province then makes a standard for customary clothing since the last few decades. Traditional West Java customs clothing that we can see at the election event of mojang and jajaka that are always held every year. 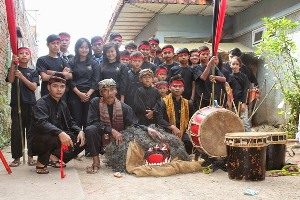 Jajakas wear a pearl suit or jacket with often black colors, slacks pants of the same color, side cloth tied to the waist, bendo head coverings, and slippers. The decoration also has worn a chain clock that is usually clipped in a suit pocket.

As for the mojang, they will wear a plain kebaya dress with embroidered decoration, kebat fabric, beubeur (belt), camisole (kamisol), karembong (shawl) as accessories, and slippers in the same color as kebaya. As for the ornaments are flowered skirt for hair bun, earrings, rings, brooches, necklaces, bracelets, chain pin, and some other jewelry made of gold throne with diamond. 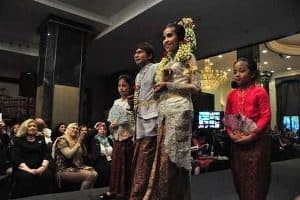 For the purposes of traditional ceremonies of marriage, the bride and groom of Sundanese will wear a special outfit called the Bridal Bride of Sukapura. This outfit is for the bridegroom in the form of a white cap coat with a white belt, batik cloth for lower parts, head cover, and slippers that are white in color. For decoration, long necklace of jasmine and keris are worn in as a traditional weapon

Jaipongan Dance from Land of Sunda (Priangan) is known to have a unique and interesting cultural variety, Jaipongan is one of the famous cultural art from this area. Jaipongan Dance is actually a modern dance because it is a modification or development of traditional Sundanese dance that is Tap Tilu. Tari Jaipong is performed with a distinctive musical accompaniment, namely Degung.

This music is a collection of various musical instruments such as Kendang, Go’ong, Saron, Kacapi, etc. Degung can be likened to ‘Orchestra’ in European.

The hallmark of this Jaipong Dance is the stomping music, where the kendang instrument sounds most prominent during the accompaniment of the dance. This dance is usually performed by a person, in pairs or in groups. As an interesting dance, Jaipong is often performed at entertainment events or weddings. In addition to jaipongan dance, there is also the art of peacock dance and mask dance.

Sundanese people have several custom musical instrument that is used in many celebratory events and will be discussed below.

Sundanese is the group of people who live in the western part of the island of Java and with the passage of time has spread its influences to various parts of the country. As a tribe, the Sundanese is the forerunner of the establishment of civilization in the archipelago, starting with the founding of the oldest kingdom in Indonesia. This, in turn, plays important parts in shaping the whole worlds’ view regarding Indonesia in general.

Finally, those are complete explanation about Culture of Sundanese, one of ethnic groups from Indonesia.