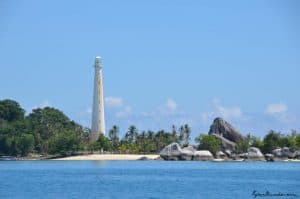 Have you ever been in an island tour? A tour where you visit several places in one time? Imagine how it feels, jumping to one place to another in a day. It might be like visiting Disney and trying its mode in a day. It must be exciting, mustn’t it?

Imagine how amazing this experience will be. But wait, where is this island hopping going on? It’s in Belitung, East Sumatra. This island is tiny island but full of beauty and wonder. Its people transform it in to a wonderful destination worth to visit. Here are the review

What is Island Hopping of Belitung?

Island hopping is simply visiting one island to another, as Belitung consists of multiple mini islands, which can be done in one day. There are several tourism company that offers two to three days. However, the objective is the same, to wade through Belitung Island.

The transportation that can be used to do this island hopping is of course a boat. Most of them are provided by local people, but you can also use services from Tourism Company there if you don’t want to be troublesome. The price for one boat is around IDR 400.000 ($ 28) to IDR 500.000 ($ 35).

This is the gate of your journey in island hopping. In this beach, you will witness a large dock full of boat ready to use. It will depart in the morning, as some of them are already booked, to give tourist island tour. So, when you go to this beach and found out that it’s already empty, you’re unlucky because all the boat is already used by other tourist. The beach will be full again in the evening around 5 p.m. to 6 p.m. as everyone already finish their tour.

From this beach, you can already see two destination in the tour, Batu Garuda Island and Kelayang Island. If you don’t get the boat to hop the islands, you still can enjoy the beach by finding hideous pool between giant rocks. Other than that, the sand and the water quality is above average.

This island is not too far from the starting point. Batu Garuda gets its name because it has giant rock resemble a head of a Garuda. However, tourist nor the boat cannot land their feet here. It’s because the rock and the coral are still fresh and genuine.

Adding with its shallow water makes it impossible for a boat to park there as it can easily break the rock and the corals. However, you still can take some photos in this spot.

This is the third spot in island hopping tour in Belitung. Kelayang is a unique island where you can find giant rocks with 3 colours in the middle of the island. The access to the rocks isn’t that hard. First, you need to go through the jungle and find a cave.

In the cave – it’s actually a series of big stones – you climb to the top and go down to go to a series of bigger rocks. Here lies the granites rocks with three colours, maroon, yellow, and orange.

The fourth destination in island hopping is an overlay of sand. It’s a pretty small island, around 100m2, and sometimes there’s marine biota trapped in the sand due to the wave. You can also do snorkelling here since the underwater scenery is beautiful, but local people doesn’t provide the facility, so you need to prepare your own snorkelling equipment.

The best time to visit this island is in the midday since the sea is in ebb and flow state and when evening comes, high tide arrives and sink the island.

Kepayang Island is a more complete tourism site than others. It has beach, white sand, big granite stone, and amazing coral reef collection. Since the marine biota is rich in this island, visitors are allowed to do snorkelling here.

Other than that, this island also applies eco-tourism where you can plant your own coral reef. There’s also an accommodation for who wants to stay a night in eco-lodge. Other than that, in this island, visitors can watch sunrise and sunset. What a complete package!

This island is the furthest destination from the start of the journey, Tanjung Kelayang Beach also the most favourite destination on Belitung. There’s an active lighthouse in the island, but unfortunately it cannot be visited anymore.

Nevertheless, you can take photo around the lighthouse. There’s also natural lake called Telaga Bidadari where it’s filled with water when the sea hits high tide. You can also buy coconut in the side of the beach for only IDR 25.000 ($ 2). There’s also a place for snorkelling to who likes to do activity underwater

This is also a favourite spot in island hopping according to many tourist. You can enjoy beautiful scenery from series if granite stones or you can soak yourself around the beach since the sea water doesn’t have high tide.

This island gets its name because local people thinks that there’s one stone that resembles ship’s sail that’s ready to expand. Other than that, water quality in Batu Berlayar is excellent that you want to jump to the water directly the second you arrive in the beach.

This island is much underrated among island hopping destinations. If you like tranquil and relaxing place to rest. This place is the right place for you. This island is small and there’s some granite stones here and there, you still can enjoy the beach, though.

The island gets its name due to its high pig population in the past. But now all the pig is gone, so the island is pretty much empty. Most of people don’t visit this island, so it’s a perfect place for you to relax and enjoy some simplicity.

Here, you can enjoy sunset while resting your body after hopping from an island to another. This beach is also an icon in Indonesia as a famous movie Laskar Pelangi did their shoot here. You will find many local tourist take photos in this beach.

Those are some important informations regarding island hopping in Belitung. With various kind of beach activities, it would be an interesting experience for your vacation. It has beautiful beach, island tour, even snorkelling. Also Belitung is underrated tourism destination in Indonesia, so that not many people know about this tourism site. What are you waiting for? Book your ticket and discover this Indonesian hidden gem as soon as possible.

10 Annual Run Festival In Indonesia You Should Join