Home » Place » Island » Get To Know About Sumba Island, Another Paradise in Indonesia 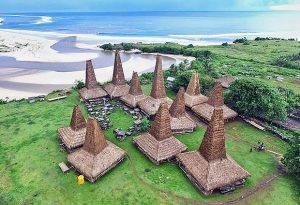 Sumba is an island located in Nusa Tenggara Timur Province. It has four administrative regions; Sumba Barat (West Sumba), Sumba Barat Daya (Southwest Sumba), Sumba Tengah (Central Sumba), and Sumba Timur (East Sumba). The most advanced city in the island is Waingapu, in East Sumba. It has an airport and a harbour connecting Sumba with others such as Sumbawa, Flores, and Timor Island.

Sumba in the beginning of the time is a no-mans-land. Until European began its occupation in 1522 and in 1866, this Island was occupied by Dutch government. After Indonesia gained its independence, Sumba Island becomes part of Indonesia (NTT).

Its society consists of hybrid race between Mongoloid and Melanesian. Sumba has not only its unique people, but also offers beautiful natural resources from beaches, hills, and villages to artificial monument such as palace and houses. Here are some majestic site that makes Sumba feels like paradise:

This village is located in Sumba Barat (West Sumba). This village is famous due to its effort in keeping their heritage alive within its society. This village is still surrounded by big trees that makes you feel living in the centre of a jungle. Praijing village is official site where you can find megalith stones. For those who likes history, this place is perfect for you. There’s also similar type of house that’s located in Flores.

This village is one of must-be-visited place in Sumba. It has unique cemetery that’s believed that they have already been established since megalith era.

This place is also what makes Sumba unique compared to other region in Indonesia. If other region usually has one or two hills in one place, Bukit Persaudaraan has multiple hills stretched from a place to another. It consists of line ups of hills, surrounded by forests and green lands. As long as you can see from the summit, all you can see is fresh, green scenery generated from trees and savannas.

This place is usually used by directors to take some scenes due to its natural beauty. Bukit Persaudaraan can be your options of where-to-visit in Sumba.

Nihiwatu Beach is considered as one of the beast beach is Asia. Some people even consider its quality on par with beaches in Hawaii. Both the sand and water are crystal clear surrounded with breath-taking green hills landscape. This site is one of the famous site in Indonesia according to international tourist.

Nihiwatu Beach has its own uniqueness. In several area, there are big stones as its natural accessory. Nowadays, some investors already build resorts and international hotels that provide comfortable and affordable accommodation for your visit in Nihiwatu. Some people also practice some water sport in this beach such as diving and snorkelling.

This village is also a unique icon that defines the beauty of Sumba. This village may be located in the centre of the island, but its community still holds traditional value that makes it feels traditional and ancient. The leader of this village is called Rato and its society believes in Merapu belief.

The traditional house is built upon pegs and nails with ordinary shape and they use straw as its roof. The roof side is usually used to save harvest product and food resources. The middle of the house is where people do their daily activity. Whereas, the ground of the house is used to stall livestock.

Puru Kambera is a wide savanna located in Mondu, Kanatang, East Sumba, NTT. This site is considered the same as savanna in Baluran National Park in Banyuwangi. People of Puru Kambera often use this place to raise their livestock. It’s no wonder then when you visit this place you’ll witness many animals (cow, buffalo, and pig) run freely in the savanna because the animal farmer just let their animals find their own food.

The unique icon that we can find in Puru Kambera is Bila tree. Cows in Puru Kambera loves its fruit to squish its water in their mouth. The savannas feels natural and arid, however its feels warm and calm that you can even hear the weave waves in the ocean.

This is one of the most famous tourism site in Sumba. This lake is the only salt lake in Indonesia. It has greenish water from the algae and surrounded by coral reef. Weekuri Lake is located in Kalena Rongo, Kodi Utara (North Kodi), Southwest Sumba, NTT. It’s believed that the salt taste in the water comes from sea water that go through coral reefs.

Weekuri Lake can be an option for tourist if they’re bored with crowded tourism site such as Bali or Lombok.

Patung Kuda (Horse Statue) is located in the quarter of Jalan Bhayangkara. This statue depicts a chevalier raiding a horse that’s believed as Pasola’s knight wielding a spear. This tourism site is not natural tourism like some sites in the list above, rather it’s a culinary tourism. From evening to midnight, many local people open their street food restaurant selling local foods and making the city alive at night. This statue is located in Komerda, Waikabubak, West Sumba, NTT.

While City Monument of Waikabubak is a city icon like the one in Jogjakarta or Jakarta. People often take photo here and share it on their social media. Moreover, Waikabubak is second largest city after Waingapu in East Sumba. This is where Kampung Tarung is located, a village where its society still holds traditional values.

Walakiri Beach is known for its white sand and sloping landscape. When ebb and flow hits the beach, people can walk through its mangrove forest. The most attractive activities offered in this beach are swimming, tanning, and laying on the beach accompanied with palm fruit.

Located in Jalan Rumah Budaya, Weetabula, Southwest Sumba, NTT, This house is known for primary information source regarding tourism site in Sumba. Every information regarding Sumba’s tourism can be gathered here from the address, how to reach the site, accommodation, and restaurant. It was officially established back in 2011.

Other than bureau of information, Cultural House of Sumba is also used to hold cultural event, discussion, and souvenir market.

In Sumba, There are several waterfalls that’s worth to visit. First, there’s Hirunamu Waterfall, located in East Sumba, this waterfall has 75 meters in height. It has natural beauty since you still can hear birds singing and shouting one another but the track to reach this site is not easy. Nonetheless, the hard work will pay off since the scenery is beautiful and the water is fresh.

Second, it has Koalat Waterfall. Located in Easy Sumba, it has 10 meters height and also mini natural water pool that can be used to swim and soak. Lastly, there’s Matayangu Waterfall, located inside National Park, It offers hidden cave behind the waterfall.

There are two national parks in Sumba. First, Laiwangi Wangameti national park. This national park has purpose to preserve national flora and fauna. You can find local endemic animals such as monkey, python, red wild chicken, and green pigeon of Sumba. It also has waterfall and lake that has naturally crystal clear water.

Second national park in Sumba is Manupeu Tanahdaru National Parks. It has bigger size than Laiwangi Wangameti which is around 87 million hectares. Its flora’s connection is approximately 118 species such as wild guava and mountain pine. It also has endemic animals that’s protected by the government such as cockatoo and other 87 bird species.

Sumbawa offers hidden gem in its tourism site that many haven’t discovered yet. It’s a perfect time to visit those places from mountain to national park to discover how rich Indonesian natural beauty is. Moreover, Sumba is a perfect place to spend your vacation time with friends or family if you’re running out of idea to where to visit in Indonesia. Sumbawa is a truly hidden paradise in Indonesia.

The Growth of Technology in Indonesia (Opportunity and Challenge)